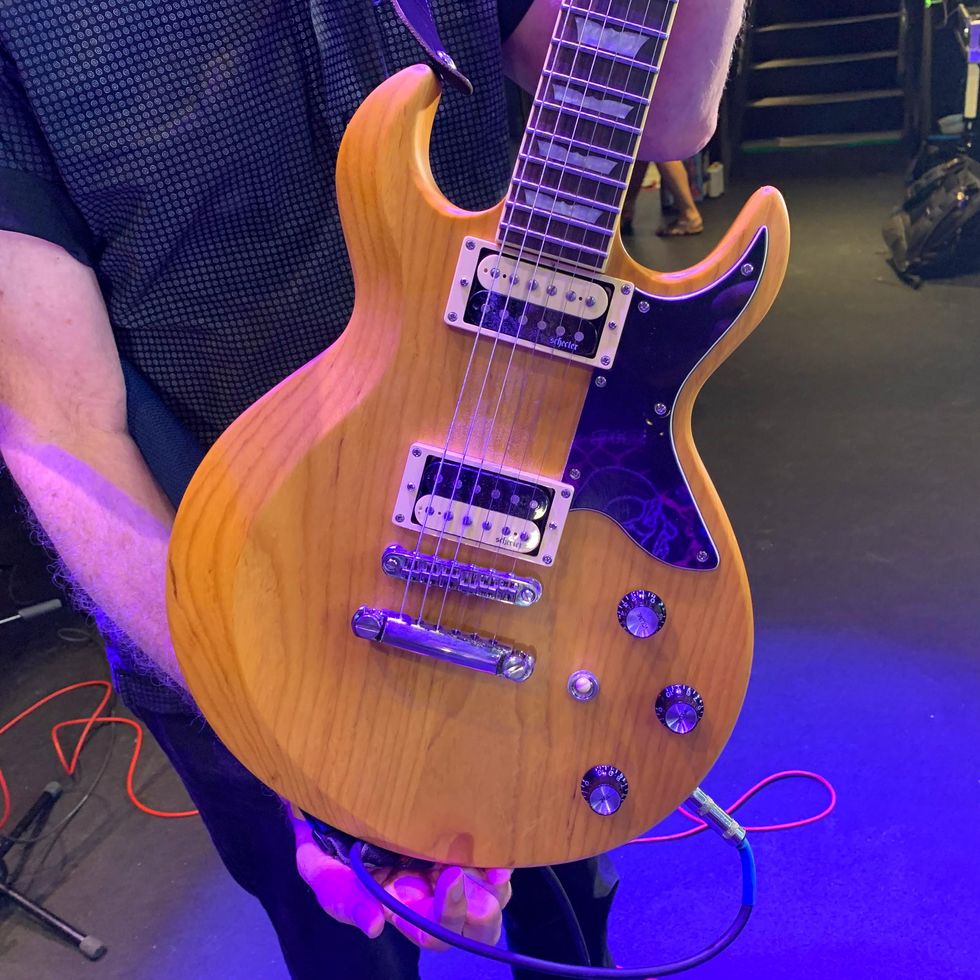 Punk rock is about energy, attitude, and message. It’s been the gateway drug for a lot of guitarists and music lovers. And those forces are what steered East Bay Ray away from his bar band gig in 1978.

“The little hairs on the back of my neck stood up,” Ray remembered during a 2016 PG interview. “I saw the weirdos playing. I said, ‘This is what I want to do.’ I phased myself out of the bar band and put an ad up in Aquarius Records and Rather Ripped Records. Klaus Flouride (bassist Geoffrey Lyall) and Jello Biafra (singer Eric Boucher) answered the ad.”

And with the addition of drummer Ted (Bruce Slesinger), the Dead Kennedys were born. By the time they recorded their 1981 EP In God We Trust, Inc. (on their own independent label, Alternative Tentacles), Ted was gone and DH Peligro (Darren Henley) became their stalwart skin slammer.

Through the band’s initial eight years, four albums, and an EP, their subversive harpoon of jagged political commentary was tipped by Biafra’s lyrics. That got the nation’s attention, but what inspires musicians to this day was the power trio’s cohesive combination of familiar and unfamiliar elements of punk and primal rock. Sure, you’ve got the power chords and the four-on-the-floor tempos, but depth and nuance under the biting messaging is essential to the DK’s chemistry. Their punk-rock bangers have modal tendencies and atonal flourishes, and some of their most thrilling songs have odd-metered backbones. Their debut single, “California Über Alles,” is a take on composer Maurice Ravel’s Boléro, no less. And nobody else in the land of the 6-string shreds quite like East Bay Ray.

“One of the reasons our songs have lasted so long is the structure underneath has a lot in common with a Beatles song or a Motown song or even a ’30s standard,” he says. “There are basic constructions that make a song work. I really had a hard time copying or figuring out solos off my favorite recordings when learning to play, so I’d develop my own musical method to get from one place to another. It’s actually a lack of technique that helped with the music.”

His creativity and resourcefulness don’t stop there. East Bay Ray was the band’s co-producer/engineer on most recordings, and he’s tinkered with his own tone tools, assembling partscasters that best suited his approach. Ray has jammed humbuckers into the bridge of a T-style for a twangier bite that helps his rapid-fire arpeggios sting a bit more. He’s slapped on short-scale Japanese F-style necks for slinkier playability. And, most notably, he put a Maestro Echoplex in front of his amp to create the signature clanging sound heard on his classic recordings with the band. (“One of my favorite records of all time is Elvis Presley’s Sun Sessions. That is one of the records that inspired me to get an Echoplex, to get that slapback echo.”)

“We just didn’t know the rules on what to play and how to play,” he relates. “That’s where not knowing something forces you to make your own solution, creating something unique and new, proving that necessity is the mother of invention. The lack of technique and knowledge helped create our sound and the music.”

Before the Dead Kennedys’ headlining show at Nashville’s Brooklyn Bowl on June 15th, PG hit the stage for a brief but illuminating tone talk. We covered Ray’s economically rich setup that includes a single Schecter doublecut and a simplified, solid-sounding Marshall, and we were enlightened about why he puts his Line 6 delay ahead of the amp and what that does to repeats.

[Brought to you by D’Addario Nexxus 360 Tuner.]

East Bay Ray was known to use a variety of fenders in the early days of the Dead Kennedys. In a PG article, he detailed that he preferred Leo’s offspring (or copies) because the longer scale length and string-through construction gave his sound more twang and clarity. He often modded out bridge single-coils for hotter humbuckers because that gave him a huskier tone that punched through the mix. He notes in this new Rundown that the Japanese T-styles he used in the ’80s actually had a 24.75″ scale length, typical of Gibson-style electrics.

“That’s how my sound started: I liked the twangy sound with the fatter humbucking pickup. Like on ‘Holiday in Cambodia,’ I play a bunch of arpeggios and they really ring out.” (In the same article, he does mention using Gibson models, but felt a “Les Paul is good for one-string type stuff, because it is really fat, but when you start playing two strings, it’s not as articulate as a Fender would be.”)

However, for this headlining run through the US, Ray brought a single Schecter S-1. He mentions in the Rundown that he still owns all his old Fenders and Japanese knockoffs but doesn’t want anything to happen to them. To soup up the doublecut, he typically swaps in a Seymour Duncan SH-1 ’59 (neck) and Seymour Duncan SH-4 JB (bridge) for the model’s standard Schecter Diamond Plus humbuckers. (Although the S-1 on this tour still has stock pickups.)

Ray’s guitar for the DK’s first singles, “Holiday in Cambodia” and “California Über Alles,” was recorded through a Fender Super Reverb (with an Electro-Harmonix LPB-1 Linear Power Booster in front of it). Shortly after those recordings, the self-admitted “science geek” tracked down schematics for Marshalls and Boogie amps and hot-rodded his Fender Super Reverb to have an extra tube channel, overhauling it to, essentially, a master-volume Marshall. He graduated to a real-deal JMP for the band’s later records and live shows. Now when on tour, he hauls a Marshall JCM 2000 because it has “a versatile sound with a good midrange, and it doesn’t have too many knobs like the TSLs [laughs]. That thing is annoying to look at.”

In the band’s heyday, Ray traveled everywhere with his beloved Maestro Echoplex. He comments in the Rundown that while it was a key component to his sound, it was a pain to maintain with its tape cartridges and the need for a bottle of tape cleaner. Plus, in Europe power runs at 50 Hz so the unit would run slower. (The US standard power is 60 Hz.) Retiring the solid-state echo machine years ago, he landed on the Line 6 DL4 as its now-long-running replacement. EBR prefers it because it has three presets and he always has it locked in the analog with modulation setting. The key to his kerrangingly musical repeats is putting the DL4 (and the ‘Plex, before he acquired the Line 6 device) ahead of the amp, making each echo a cleaner decay than the one before it.

Taken from our 2016 interview, we’ll let East Bay Ray decode the method to his madness: “One of the tricks is to put the echo unit before the amp. Recording engineers don’t like that. The echoes clean up as they go through the amp because they’re at less volume. Recording engineers or some guitarists stick it in the loop in the back of the amp. They make the sound, process it, and then they add the echo—but that’s more like a post-EQ effect. I do it pre EQ. Even when I’m maxed out—like with the compressor on, the amp up, and the guitar all the way up—if there is a piece of silence, if you listen to the echo, it cleans up. The last ones will be the clean guitar. It’s a less technical way to do it, but it’s a more musical way. It’s bad engineering, but more musical. For someone who’s trained in engineering, ‘Each echo is different!’ But from an artistic side, ‘Yeah. That’s what makes it more interesting—because they’re different.’”

As for the Boss CS-3 Compression Sustainer, he uses it more as a boost than squeezebox. He maxes the level, eases back the tone, dimes the attack, and pushes the sustain, resulting in a mild volume jump for solos and single-note ditties. It’s in the chain after the DL4 and ahead of the amp so it can boost the repeats when the CS-3 is engaged along with the green machine.