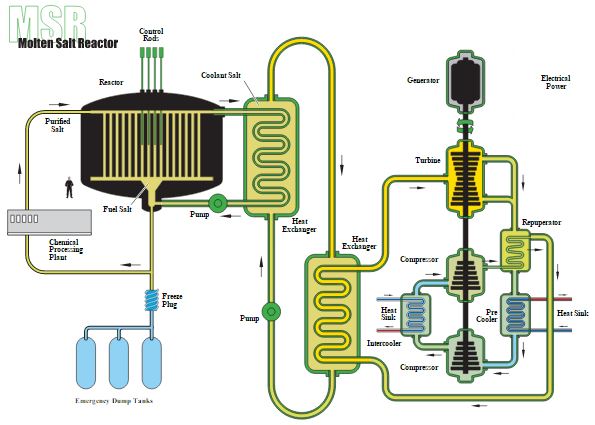 According to the World Nuclear Association, electricity demand almost doubled from 1990 to 2011 and is expected to increase by 81% from 2011 to 2035. Nuclear power currently provides around 11% of global electricity and 21% of electricity in OECD countries. While nuclear power is the most environmentally friendly way to generate electricity on a large scale, accidents like Fukushima and Chernobyl have earned the nuclear industry a bad name in the eyes of the public.

To increase the use of nuclear energy, we need to rethink the technology used with an emphasis on safety. One such approach is the molten salt reactor (MSR), which is expected to be cheaper, safer and produces less nuclear waste compared to traditional nuclear reactors. The following scheme shows how the concept works:

The technology must be promising as there are now 6 companies pursuing some form of MSR.

Terrestrial energy (Ontario, Canada)
Terrestrial was founded in 2013 and is developing its “Integral Molten Salt Reactor” (IMSR) with its three unique models from 29 MWe to 290 MWe, which are suitable for remote communities and industry, into a small modular set-up operations. Her international advisory board includes influential people such as the former Lockheed CTO, a former NRC commissioner, a former EPA administrator and the former president of Bechtel Nuclear. Terrestrial expects to build and license its first MSR early next decade and has signed a letter of intent to conduct research and development with Canadian nuclear laboratories.

Moltex Energy (London, England)
Moltex was founded in 2012 and has developed a really new reactor concept that differs from traditional MSR design. This reactor, referred to as the “stable salt reactor”, uses molten salt fuel held in static fuel tubes rather than conventional “pump circulation” designs. This British invention is protected by worldwide patents and is intended to reduce technical complexity and regulatory requirements. The company’s next step is to conduct a preliminary safety assessment with the nuclear regulators, after which they can begin to assess the economic feasibility.

ThorCon Power (Florida USA)
Thorcon has developed a simple molten salt reactor over the past 4 years that does not require any new technology. The company claims that its pilot project was already proven by the Molten Salt Reactor Experiment (MSRE), which began in 1959 and ended in 1969. You just have to scale the original design and believe that there is no technical reason why a full-size 250 MWe should be done and the prototype cannot be up and running in four years. Your packaged nuclear power plant units, which are based on this design, are buried 30 meters underground and are “accessible”. Production is scheduled to begin by 2020.

TerraPower (Washington USA)
TerraPower was founded in 2008 and has Bill Gates as both an investor and chairman. The company’s technology is known as a “traveling wave reactor” (TWR) and uses depleted uranium, which greatly simplifies the nuclear fuel cycle. Just last month they signed a “Memorandum of Understanding” with the China National Nuclear Corporation (CNNC), which they described as the “next step in the development of a prototype”.

Flibe Energy (Alabama USA)
Flibe was founded in 2011 and suggested using thorium as a nuclear fuel instead of uranium. Founder Kirk Sorensen, both a nuclear engineer and a rocket scientist, claims that corporate interests prevented the use of thorium as a nuclear fuel. The Flibe liquid fluoride-thorium reactor is expected to cost several hundred million dollars to build.

Transatomic Power Corporation (Massachusetts USA)
Transatomic was founded in 2010 and is the only company to announce its funding amounts. Three rounds totaling $ 5.5 million from investors, including Peter Thiel. The company is developing its “Waste Destroying Molten Salt Reactor” (WAMSR), a 520 MW molten salt reactor that uses the waste from traditional reactors as a fuel source. While a conventional reactor can use up to 4% of the energy in its uranium fuel, the WAMSR uses 96%, reducing nuclear waste to 2.5% of the energy produced by a typical reactor. The overnight cost of the WAMSR is $ 1.7 billion. Laboratory-scale experiments are currently being conducted to refine the design for the prototype facility, which is expected to be completed by 2020.

One thing all six of these companies have in common is that they are all in the very early stages of development and therefore don’t need a lot of money yet. This also means that we are far from allowing private investors to participate in MSR technology as an investment. A large round of investment for one of these companies would mean a transition from the concept phase to the construction phase.