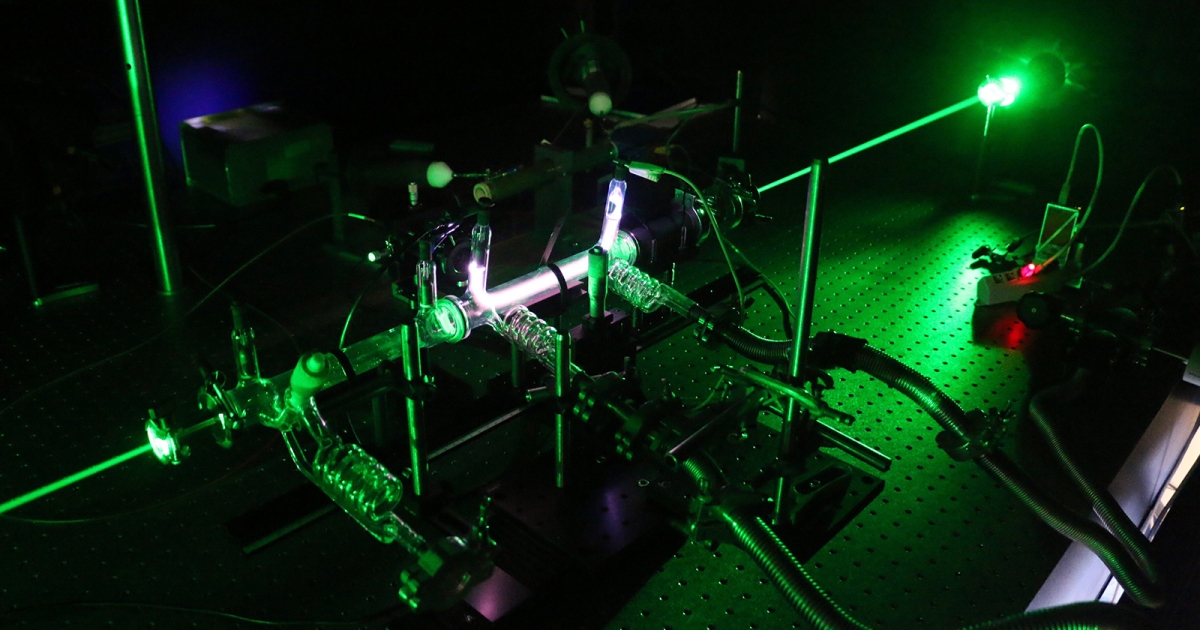 A plasma reactor could help astronauts breathe on Mars

An international team of researchers has demonstrated a new way to produce oxygen on Mars — by blasting carbon dioxide molecules apart inside a plasma reactor.

The challenge: Future Mars astronauts will need enough food, water, and breathable air to last the duration of their missions, but the cost of shipping all the needed resources to Mars from Earth would be astronomical (pun intended).

Instead, we need to source as many resources as we can from the Red Planet — and conveniently enough, Mars has plenty of oxygen in its atmosphere. Inconveniently, it’s in the form of carbon dioxide (CO2), so we’ll need to split the compound and extract the oxygen.

“When bullet-like electrons collide with a carbon dioxide molecule, they can directly decompose it.”

NASA has already proven that it’s possible to produce oxygen on Mars with MOXIE (the “Mars Oxygen In Situ Resource Utilization Experiment”), a gilded instrument on board the Perseverance rover that uses electricity to split CO2 into oxygen and carbon monoxide.

To work, a MOXIE-like machine needs to pressurize and heat the Martian air, though. That adds to its size, and bigger instruments mean higher launch costs and less room for other cargo.

plasma power: There’s more than one way to split a molecule, though, and a new plasma-based system might lead to the development of a better, more compact life-support system.

Plasma reactors use electric fields to excite molecules in a gas, causing electrons to break free from atoms. For their study, the researchers demonstrated how an accelerated beam of those electrons could be used to split CO2 molecules in a reactor filled with simulated Martian air.

“When bullet-like electrons collide with a carbon dioxide molecule, they can directly decompose it or transfer energy to make it vibrate,” said lead author Vasco Guerra of the University of Lisbon. “This energy can be channeled, to a large extent, into carbon dioxide decomposition.”

“The natural conditions on Mars are nearly ideal to [in-situ resource utilization] by plasma.”

The benefits: The plasma reactor was able to convert about 30% of the air in it into oxygen, and unlike MOXIE, it didn’t need to adjust temperature or pressure to work, either — that means a Mars-ready version of the tech might be less bulky.

“The natural conditions on Mars are nearly ideal to [in-situ resource utilization] by plasmas,” Guerra told Gizmodo. “In particular, the atmospheric composition, the ambient pressure, and temperature all play in favor of a plasma process.”

The plasma-based system could also be tweaked to extract other elements from Mars’ atmosphere, giving astronauts a source of nitrogen for fertilizer, for example.

“This versatile system may one day play a critical role in the development of not only life-support systems on Mars but also feedstock and base chemicals for processing fuels, building materials, and fertilizers,” said Guerra.

looking ahead: The researchers estimate that a 13-pound plasma reactor running for one hour on Mars could generate enough oxygen for 28 minutes of breathing for one astronaut. For comparison, the 37-pound MOXIE is designed to produce 20 minutes’ worth of oxygen per hour.

However, the team has only demonstrated that its plasma reactor can separate oxygen from simulated Martian air — it hasn’t developed a fully functional instrument that could actually be sent to Mars for testing.

“There’s nothing wrong with the plasma technique other than it’s a lot less mature [than MOXIE].”

That finished product would need a power source and an oxygen storage unit, which could end up making it just as bulky as MOXIE, Michael Hecht, MOXIE’s principal investigator, who wasn’t involved in the study, told Science Magazine.

However, he doesn’t see any reason a plasma-based system couldn’t produce oxygen on Mars and is particularly intrigued by its potential versatility.

“There’s nothing wrong with the plasma technique other than it’s a lot less mature [than MOXIE],” Hecht told Science.

We’d love to hear from you! If you have a comment about this article or if you have a tip for a future Freethink story, please email us at [email protected].

A Systematic Review of Apoptosis in Correlation With Cancer: Should Apoptosis Be the Ultimate Target for Cancer Treatment? – cureus