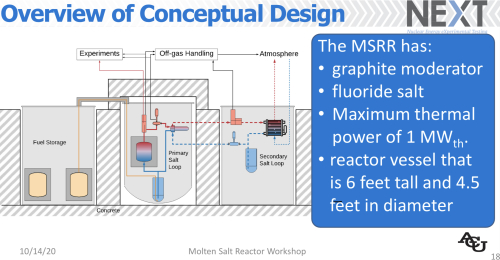 Molten Salt Reactors (MSRs) use a fluid fuel in the form of very hot fluoride or chloride salt rather than the solid fuel used in most current nuclear reactors. Since the fuel salt is liquid, it can be both the fuel (producing the heat) and the coolant (transporting the heat to the power plant). (Earlier post.)

There are many different types of MSRs, including the Molten Salt Breeder Reactor (also know commercially as the Liquid Fluoride Thorium Reactor, or LFTR), fast breeder fluoride MSRs that don’t use thorium at all, and chloride salt-based fast MSRs that are usually studied as nuclear waste burners due to their extraordinary amount of very fast neutrons.

In its Regulatory Engagement Plan (REP) submitted to the NRC in the pre-application phase, ACU noted that:

Trial underway in SF could remove fluoride from drinking…

The nuclear industry gained a degree of familiarity with Molten Salt Reactors following the June 1965 startup of the Oak Ridge National Laboratory (ORNL) Molten Salt Reactor Experiment (MSRE) [earlier post]. The ORNL MSRE design incorporated a one region reactor with graphite moderator and circulating fuel. The moderator consisted of vertical stringers of graphite, which formed a cylindrical core within a reactor vessel. The fuel passed downward in an annulus between the graphite cylinder and the core barrel. It then flowed upward in channels formed between the stringers, out the top to a pump, through a heat exchanger, and back to the core. Exiting at nearly 663° C the fuel entered a sump-type fuel pump and was discharged through the shell side of the heat exchanger back to the core inlet. The MSRE design used light water for cooling the containment atmosphere, containment vessel, reactor shield, drain tank, primary pump, and containment penetrations. The MSRE operated for a period of four years and ORNL generated a substantial body of documents. 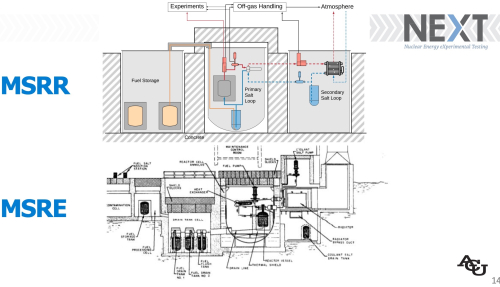 ACU is leading the NEXT Research Alliance (NEXTRA), which includes Georgia Institute of Technology, Texas A&M University and The University of Texas at Austin, in a $30.5-million research agreement sponsored by Natura Resources to design and build a university-based advanced molten salt research reactor.

The construction permit application is one of eight primary milestones NEXT Lab has outlined along the way to making the MSRR operational. The first milestone was completed last year when the Science and Engineering Research Center design was completed. Its completion next summer will mark another milestone.

Formal interactions with the NRC make up half of the milestones with the submission and approval of both the construction permit and later the operation license. The final two milestones are the construction of the reactor and it becoming operational. dr Rusty Towell, director of NEXT Lab and professor in the Department of Engineering and Physics, is optimistic that with the support of Natura Resources and NEXTRA, the final milestone is achievable.

Kazakhstan’s first NPP to be an international project

Nuclear lifetime extensions: Is the juice worth the squeeze? – Energy Monitor