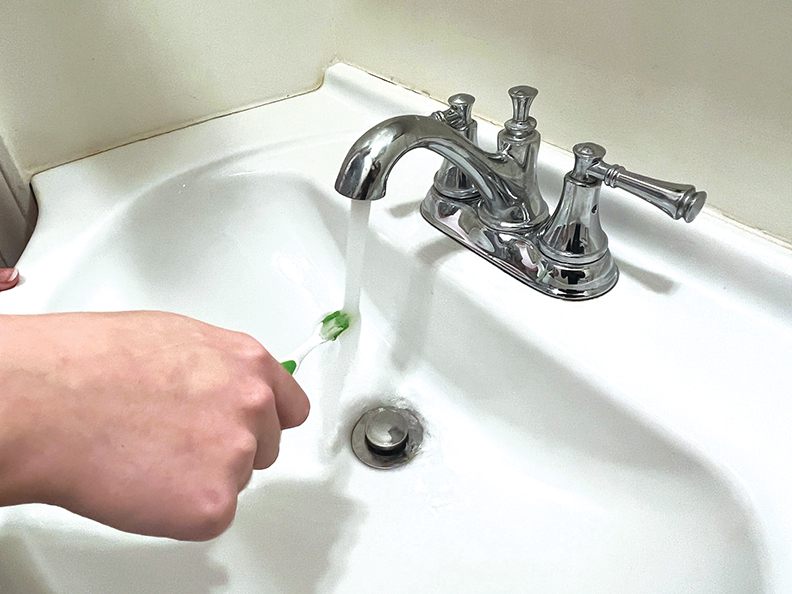 News Photo by Steve Schulwitz An Alpena resident rinses a toothbrush under running water in this News photo. The Alpena Municipal Council will discuss tonight whether or not to continue adding fluoride to its water supply.

ALPENA — The Alpena Municipal Council is getting closer to taking action on whether to continue adding fluoride to its water supply.

The topic will be discussed during its meeting tonight, which begins at 6 pm at city hall.

Water fluoridation is the controlled adjustment of fluoride to a public water supply solely to reduce tooth decay.

A report from City Engineer Steve Shultz — provided in the city’s meeting packet — outlines three options for council to consider, as well as the health and financial impacts of each.

In his report, Shultz says Alpena can continue to order the powdered fluoride additive it currently uses when it is available, but future supplies are in question.

He said the price of the chemical continues to rise, and no supplier can guarantee a price for longer than three months.

Shultz said the fluoride purchased in May was $3.05 a pound, but the current vendor has indicated that it can provide the powdered fluoride for $3.45 per pound. The rate hike equates to $7,600 more the city would pay for the same amount it purchased earlier this year.

The second option is to use liquid fluoride, which has the easiest availability.

Converting to the liquid form, however, would mean the city would have to invest about $100,000 to renovate the plant to accommodate it. Shultz said it would cost the city $20,000 a year for the liquid chemical.

Using the liquid chemical could also expose employees to health risks, according to officials.

Last year, Veolia Utility Manager Mike Glowinski said hydrofluorosilicic acid is extremely dangerous — touching it, or breathing it in can cause injury. The corrosiveness of the acid can also cause severe damage to the plant if vapors escape from the liquid or the liquid itself containment.

The plan would require ventilation improvements if the council chooses this path.

The third and final option is to discontinue putting the chemical in the water all together.

Shultz said the Michigan Department of Environment, Great Lakes, and Energy does not require municipalities to use fluoride, but recommends a public input session so residents can weigh in before use of fluoride is discontinued.

Glowinski said only about 10% of the water produced is consumed by people and the balance is used for cooking, cleaning, on lawns, and other household needs. He said because such a small amount is consumed, most of the fluoride in the treatment plant is wasted when water is used for other things.

According to the Centers for Disease Control and Prevention, drinking fluoridated water reduces tooth decay and cavities by about 25% in children and adults.

The city — which has used fluoride since 1958 — confirmed in June the addition of fluoride is not required by the state or any federal regulatory agencies. However, the council is required to host a public hearing and allow citizen comments before officially ending the process.

Today’s news round up in Poland – The First News

Could nuclear power propel shipping into ‘a new era’?