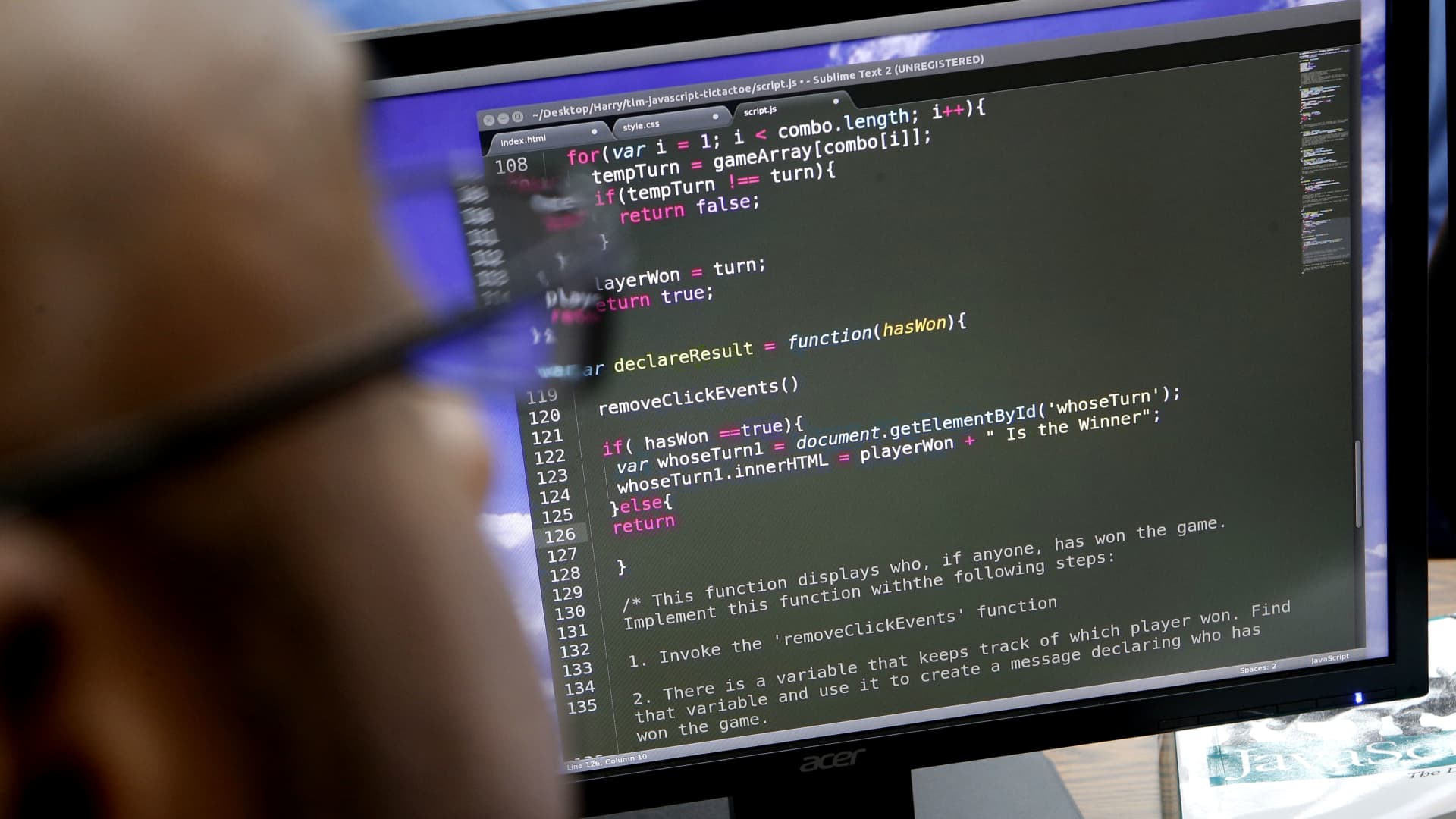 Americans with criminal records are in demand in the job market

Computer code being written by an inmate during a class at San Quentin State Prison.

Companies in tech, banking, transportation, and scores of other sectors are looking at a huge segment of the US population as a promising source of much-needed workers: Americans with criminal records.

Today, there are close to 2.2 million people behind bars in state and federal prisons and in jails, and the vast majority of them will be released at some point. There are also nearly 80 million Americans with a criminal record, according to the Bureau of Justice Statistics. Even an arrest without conviction can create a lifetime of barriers to employment, leading to poverty, repeat offenses, and re-arrest.

But in recent years, a growing number of companies, driven by social justice reform as well as the intense struggle to find talent, are participating in formal programs to help these individuals re-enter the workforce.

Next Chapter, founded by messaging technology and Salesforce subsidiary Slack, focuses on helping those with criminal records get technical training and mentorship in order to build careers in the tech sector.

The Second Chance Business Coalition (SCBC), spearheaded by JPMorgan Chase CEO Jamie Dimon and Eaton CEO Craig Arnold, was formed last year in the aftermath of the George Floyd murder. Its aim is to increase the number of companies offering job opportunities to individuals with criminal records, and to prove that doing so is not just good for society, but for the bottom line as well. Company partners include Best Buy, McDonald’s, Microsoft, PepsiCo, Target, and Walmart.

Research published by SCBC shows that 85% of human resources executives and 81% of business leaders report that individuals with criminal records perform the same as, or better than, employees without criminal records. Further, the research shows they have lower turnover and stronger loyalty to their employers, an incredibly attractive quality amid rampant resignations.

Yet, for many companies, the stigma connected to those who have been arrested or who have served time in prison has prevented them from hiring or even interviewing these individuals. In 2016, Slack CEO Stewart Butterfield saw this problem first-hand when he visited San Quentin prison. He was there to meet a group of men learning to code through a tech entrepreneurship program at the prison called The Last Mile. He quickly realized that while they were talented coders, there was no path to full-time tech employment once they were released. He also saw that the majority of the prisoners were people of color and other minorities who were woefully underrepresented in the tech space. Two years later, Slack started Next Chapter and began recruiting other tech companies to join the effort.

There are now 14 tech companies participating in Next Chapter’s network of hiring partners, including PayPal, Zoom, Dropbox, and Asana. The formerly incarcerated men and women accepted into the program begin their journey to full-time employment with a test to gauge their aptitude for the tech field. Those that pass are then required to complete a three-month virtual coding boot camp administered by coding education program Hack Reactor before being matched with one of the participating companies. The first five months are considered an apprenticeship and include extensive coaching around not only the technical aspects of the job, but what it takes to make the transition from prison life to the workplace.

“Many of these folks have never had a white collar job so it’s important that they are set up for success without slowing down the business,” said Deepti Rohatgi, executive director of Slack for Good. Apprentices are paired with various coaches through Next Chapter to help them navigate not only the work, but the challenges that come with managing the responsibilities of life outside of prison. Managers, as well, are given special training on how best to support these new hires. To date, 31 formerly incarcerated people have been hired for full-time tech positions by the companies participating in Next Chapter’s program.

The SCBC has a similar mission, but includes 42 companies from all sectors of the economy. Stan Ball, vice president and chief litigation counsel at Eaton, said the organization was launched last year after the Business Roundtable, of which Eaton CEO Craig Arnold is a member, pledged to address the issue of workplace re-entry among the formerly incarcerated.

“Every one of the companies that’s part of the Business Roundtable is responsible for hiring tons of Americans,” Ball said. “We realized that we didn’t have to wait for policymakers in Washington in order to have a meaningful impact in helping people re-enter the workforce. We can look at the barriers that exist among companies and figure out how are they preventing us from getting access to this talent.”

Union Pacific is among the companies participating in the Second Chance Business Coalition. Beth Whited, executive vice president of sustainability and strategy, said the railroad was drawn to the organization in large part because it aligns with her company’s goal to have a more diverse and inclusive workforce.

“People of color are much more likely to be incarcerated than white people as a percentage of the population and this is a way to reach them,” she said. “They really need this chance and can lift up communities when they get employment.”

Whited said Union Pacific has hired a dozen formerly incarcerated people since the end of last year and has another 75 people in the process of applying. Jobs include those working in train and engine services and maintaining the freight car fleet and the locomotive fleet.

The key to the program’s success so far, she said, is partnering with local organizations that can provide wrap-around support services for individuals that are making the transition from prison to the workforce.

“Most people coming out of prison haven’t set themselves up with a place to live so we needed partners with grant funding to help with housing or purchasing necessary equipment, like steel-toe safety boots that can cost up to $150 a pair,” she said. Some of the other partners Union Pacific works with also provide these new hires with mental health counseling and substance abuse support.

“The partners are really critical to the success of the program,” Whited said. “I don’t think we’d be able to do this if we didn’t have partners like this.”

Of course, there are regulatory and legal issues that need to be addressed before a company can consider hiring a formerly incarcerated individual. Since Union Pacific is a railroad and is regulated by a number of federal agencies, Whited said a recent DWI conviction would preclude the company from hiring someone. “But once a certain amount of time has gone by we would consider them,” she adds.

Kenyatta Leal, executive director of Slack’s Next Chapter, said the biggest pushback he gets when speaking with companies about hiring people with criminal records is fear.

“They wonder, have these people truly changed, and are they capable of coming into the workplace and actually being productive,” says Leal, who spent 19 years in prison, including time at San Quentin. “There’s no question that fear is driven by the stereotype that’s attached to incarceration.”

His hope, and that of the other people involved in these programs, is that the opportunity to tap into this diverse talent pipeline will convince more companies to forge ahead and get involved.

“It’s not just about giving someone a job,” Leal said. “It’s giving them a chance to remake their life, support their families and strengthen their communities. It’s good in so many ways.”