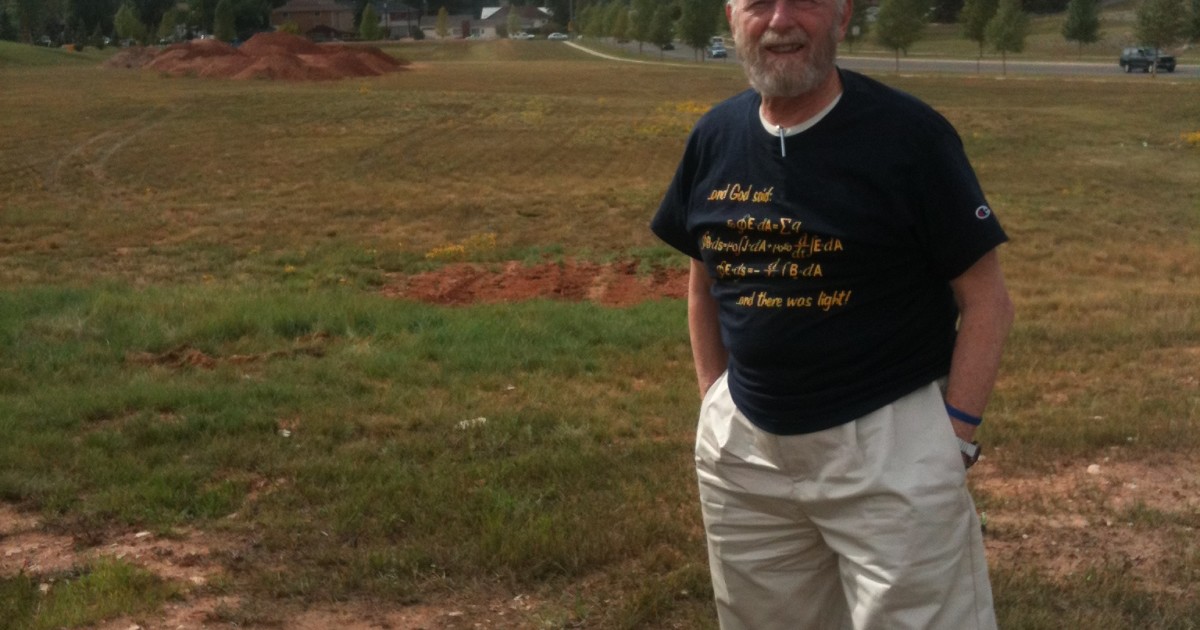 Many retirees engage in one hobby – knitting, bird watching, bingo. But two Laramie retirees have decided to spend their days doing a decidedly less mainstream pastime: solving the energy challenges of our time. Stephanie Joyce of Wyoming Public Radio has the story.

STEPHANIE JOYCE: It’s a sunny fall day and Dave Earnshaw is standing in front of the University of Wyoming’s central power station, staring at the empty field next to it.

DAVE EARNSHAW: A 200 megawatt nuclear reactor would fit right there. It wouldn’t even take up as much space as the pile of dirt down there.

JOYCE: Obviously, Earnshaw is not talking about the average nuclear reactor. He speaks of a so-called liquid fluoride thorium reactor or LFTR (pronounced “lifter”) – and he says comparing the two is like comparing apples and oranges. He recently sat down to review the licensing requirements for nuclear power plants.

JOYCE: You don’t need a huge bin for garbage either because LFTRs don’t produce a lot. And because the reactors operate at ambient pressure, the risk of a catastrophic blowout is low. The technology has been labeled as revolutionary and groundbreaking, but it has been slow to take hold. This is very frustrating for Earnshaw.

JOYCE: So Dave Earnshaw is committed to becoming an LFTR evangelist. And he committed his friend Dave Copeland to it. Both are retired scientists: Earnshaw is an environmental scientist and Copeland is a geologist. For the past three years, Dave and Dave have met every week at El Conquistador, a cheesy Mexican restaurant in downtown Laramie, to discuss LFTR.

JOYCE: The aim of these meetings is to develop an information pack that can be distributed to lawmakers, engineers – and yes, journalists. Dave Copeland explains how they started.

DAVE COPELAND: We are folk dancers. We’ve been tough on it for the past thirty years or so.

JOYCE: And that’s how you got to know each other through folk dancing. How in the world did nuclear power come about?

EARNSHW: Well because we were friends and I knew he did a lot of editing and so on.

JOYCE: Copeland is a regular editor for geology publications. So Earnshaw asked him to help write a number of documents on LFTR, including a vision paper, several articles, and a case study exploring how it could be used to make synthetic fuels. Copeland says he loved it as much as Earnshaw.

COPELAND: For me it is the key element in a total energy regime. And the opportunity it offers the state is simply huge. It’s huge.

JOYCE: They both believe that using a thorium reactor would be cheaper and cleaner than existing energy sources and would open up a new use for Wyoming’s largest traditional source of income: coal.

EARNSHW: I was just sort of scratching the back of an envelope, saying what would happen if we hydrogenated coal instead of gasifying coal? And the advantages are many.

JOY: The hydrogenation of coal creates synthetic fuel that can be converted into a wide variety of liquids, including gasoline and kerosene. But it requires a large amount of hydrogen, which is expensive to produce because of the energy required to break it down from natural gas or water. Enter the thorium reactor.

If you’re wondering what the downside is, well, there may be plenty of them. LFTR has never been used commercially. A test reactor ran at Oak Ridge for several years in the 1960s, but there are many skeptics as to whether it would work outside of a laboratory. Those naysayers didn’t dampen the Daves’ enthusiasm. Earnshaw says he likes to respond to the critics.

EARNSHW: I would actually have an open debate with you!

JOYCE: Whether he gets this opportunity remains to be seen. It has proven difficult to get the public interested, let alone excited, about LFTR. Last year, the Daves helped bring an expert on the technology to lawmakers, but the reception has been lukewarm. And talking about it all the time can get tiresome.

JOYCE: Despite the cool reception, the Daves have no plans to stop talking. Earnshaw tells me that the twenty years he has spent exploring oil shale have been a waste.

EARNSHW: “And so, before I die, I said I really want to help the world find something that really works and really does something good.”

JOYCE: And he’s attaching that dream to LFTR. Even if he is the only one who can imagine a nuclear reactor in the empty space next to the university’s power station.

Artificial intelligence wants you (and your job) – salon