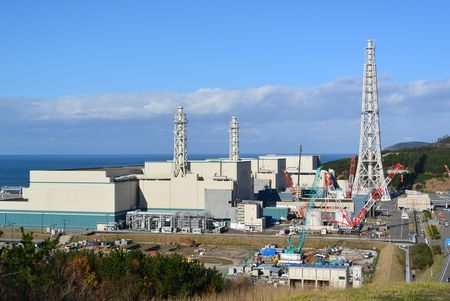 the no 7 reactor’s main facility has already passed the NRA safety screening needed for its restart and TEPCO had been working on bringing the reactor back online.

The NRA, however, issued a de facto ban in April last year on operations at the Kashiwazaki-Kariwa plant after a series of security flaws came to light at the plant. The problems included the firm’s failure to repair malfunctioning equipment to detect intruders.

In such circumstances, it was questioned whether it would be appropriate for the NRA to proceed with its examination of the firm’s plan for the anti-terrorism facility’s construction. In July this year, however, the authority approved a draft report stating that the construction plan met new safety standards the country introduced after the March 2011 triple meltdown at TEPCO’s tsunami hit Fukushima No. 1 nuclear plant in the northeastern prefecture of Fukushima.

At a regular meeting of the NRA on Wednesday, its chairman, Toyoshi Fuketa, said that the approval of the construction plan for the antiterrorism facility “was to confirm whether TEPCO’s basic plan is appropriate, and (it) has nothing to do with the possible removal of the order (banning the plant’s operations.)”

EDITORIAL: TEPCO must be candid on plan to discharge tainted water into ocean | The Asahi Shimbun: Breaking News, Japan News and Analysis – 朝日新聞デジタル