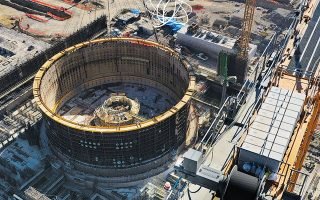 The contract to build the Akkuyu Nuclear Power Plant was signed in 2010 by the Turkish state and Rosatom, Russia’s state-owned nuclear power company. The cost of the project is around $ 22 billion. The contract provides for the construction of four 1,200 MW nuclear reactors.

About three weeks ago, during a 45-minute conversation with his American counterpart, Greek Foreign Minister Nikos Dendias raised an issue that is often under the radar of international diplomacy. Dendias spoke to Tony Blinken about the many problematic issues surrounding the construction of a nuclear power plant in Akkuyu, southern Turkey. These range from the fact that it poses a security threat to other states in the immediate vicinity of Turkey, to Russia’s largest foreign investment, to Ankara’s unwillingness to exchange information about the plant. According to the same source, Dendias also pointed out the danger that Akkuyu could become a new “Chernobyl” in the eastern Mediterranean.

Athens has been closely watching Turkey’s suspicious endeavors for many years. Reports within the relevant Greek services, to which Kathimerini’s attention was drawn, make it clear that there is a further threat to the Turkish nuclear program. By creating nuclear reactors for power generation, Turkey is gaining both the necessary technological know-how and access to materials that could be used to develop nuclear weapons.

Greek officials, who spoke on condition of anonymity, reported that Turkey was implementing a plan to build three nuclear power plants. At the same time, nuclear engineers are being trained and access to resources is being sought for two purposes – fissile materials and equipment intended for both civil and military uses.

Of the three planned nuclear power plants, the furthest is the one in Akkuyu on the southeast coast of Turkey near the city of Mersin. Two further plants in Sinop on the Black Sea and Igneada in Eastern Thrace, also on the Black Sea near the border with Bulgaria, are being built or planned.

Turkish President Recep Tayyip Erdogan has publicly expressed his ambition to establish Turkey as a nuclear weapon state. “Some states have missiles armed with nuclear warheads, and they tell us that we cannot acquire such weapons as well. I cannot accept that, ”he said in September 2019 to members of his Justice and Development Party (AKP).

The contract to build the Akkuyu plant was signed in 2010 by the Turkish state and Rosatom, Russia’s state-owned nuclear power company. The cost of the project is around $ 22 billion. The contract provides for the construction of four 1,200 MW nuclear reactors. Two of them are already under construction and the first is scheduled to go online in 2023, the hundredth anniversary of the Turkish Republic. However, the power plant is not expected to be fully operational before 2025. It is estimated that the Akkuyu nuclear power plant will cover 8 to 10% of Turkey’s energy needs and have an expected service life of at least 60 years.

Rosatom is funding the project through its Turkey-based subsidiary Akkuyu Nukleer JSC (Rosatom has held 99% of the company’s shares since 2010). It is the largest private investment in nuclear energy in the past 17 years. As for the Akkuyu site, it should be noted that it has not yet been subjected to the necessary stress tests. Various technical problems were assessed, including any hazards posed by seismic activity in the area.

In 2013, the Turkish government also started negotiations with Mitsubishi Heavy Industry and the French company Areva to build a second nuclear power plant in the Sinop region. However, there was disagreement and the Japanese company pulled out of the negotiating table and the future of the project remains uncertain.

In his place, the Turkish state-owned energy company agreed with China to build a nuclear power plant in the Igneada area in eastern Thrace, about 5 kilometers from the Bulgarian border. In fact, the larger area was designated as a military zone in May. Greek officials familiar with the subject point out that it will most likely facilitate the compulsory cultivation of the plot of land earmarked for the construction of the power plant.

There are two uranium deposits in Turkey. The first and older of the two mining areas is located in Temrezli in the central Turkish province of Yozgat. A second deposit was discovered near the town of Sefaatli in the same province. In 2015, exploration and operation of the site was carried out by an American company, but they withdrew from the area three years later, partly due to mounting tensions in US-Turkey relations. Turkey’s diplomatic overtures and maneuvers in uranium-rich African countries, including Niger and Chad, are believed to be part of its broader nuclear ambitions.

Similarly, Greek and international analysts suggest that the overtures of Turkish officials to members of Pakistan’s political and military establishment are also part of a broader attempt to establish Turkey as a nuclear power, as Pakistan is one of the nine countries in the world that has a Nuclear power dispose of a nuclear arsenal. According to international reports, a treaty aimed at providing Pakistan with technological expertise in building nuclear weapons and possibly even long-range missiles to Turkey was the subject of a meeting between Turkish and Pakistani military officials in Ankara in late December.

The Russian Institute of Nuclear Physics began training Turkish nuclear engineers in 2018. It is estimated that over 140 new engineers have graduated since the program began, and another 110 are still studying. According to a report published on February 17 by the Turkish newspaper Hurriyet and republished by the Russian news agency Sputnik, Turkish nuclear engineers are being trained at the Russian National Research Nuclear University MEPhI in Moscow and Obninsk.

At the same time, Turkey is maintaining ties with Ukraine for a replacement option should the Kremlin decide to end support for Turkey’s nuclear program and transformation. Turkey signed the Treaty on the Non-Proliferation of Nuclear Weapons in 1980 and signed the Comprehensive Nuclear-Test-Ban Treaty in 1996. In an article published a few months ago by the Center for the National Interest, a conservative US think tank, a US State Department official is quoted as saying that it is important that Turkey fulfills the commitments it made in signing the continues to comply with both contracts. Turkey’s nuclear ambitions are also constrained by the country’s NATO membership, as nuclear non-proliferation is one of the organization’s pillars. However, Erdogan was never shy of his intentions and declared in the General Assembly of the United Nations in September 2019 that “the possession of nuclear energy must either be forbidden to all or allowed to all”. Finally, it should be noted that Turkey is not a party to the International Atomic Energy Agency’s Joint Convention on the Safety of Spent Fuel Management and the Safety of Radioactive Waste Management.

Researcher Looks to His Home Country for Latest Project