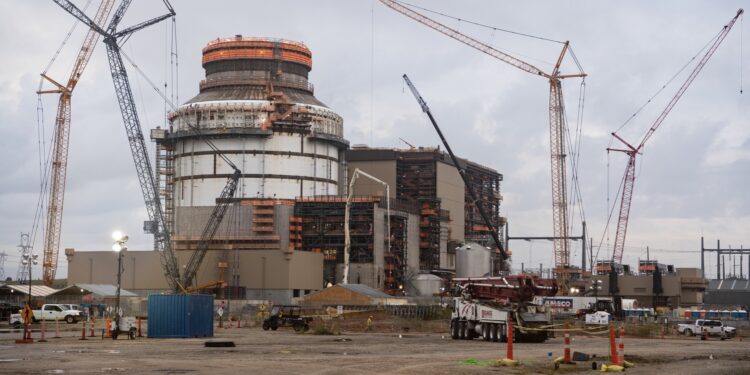 At the COP26, the United Nations climate summit in Scotland, the discussion about nuclear energy, which is generated by plants such as the Vogtle power station, seems to be on the rise.

The US has no plans to join China, India and about 17 other countries in expanding nuclear capacities to reduce carbon emissions from power generation. China alone has announced plans to complete more than 150 nuclear reactors at a total cost of up to $ 440 billion by 2035.

Almost 40 reactors, which are scheduled to go online by 2027, are almost as big as each of the two reactors at the Vogtle plant, according to a report by the World Nuclear Association this month.

White House energy policy, announced Nov. 1, calls for modest growth for nuclear and substantial growth for renewables by 2050. Fossil-fueled electricity with carbon capture and storage is expected to grow faster than that Nuclear energy. The news of the report was overshadowed by other events.

The market reacts to the nuclear talks in Glasgow.

A uranium supplier, Texas-based Uranium Energy Corp., has stock prices up 27 percent since Nov. 2. The shares closed at $ 5.28 on Tuesday, giving the company a market value of nearly $ 1.2 billion. According to The Wall Street Journal, its share price was $ 1.84 on Jan. 4.

Former US Secretary of Energy Spenser Abraham is the non-executive chairman of Uranium Energy. The company’s CEO and President said in a statement Oct. 28 that the company was “the leading US uranium company amid a new era of public, government and scientific support for nuclear energy, which is essential to a low-carbon global economy.”

In Glasgow, nation-states appear to be unable to reach agreements to address global warming according to the levels set in the 2015 Paris Climate Agreement. The nuclear discussion continues.

Rafael Mariano Grossi, director general of the International Atomic Energy Agency, said in an interview with CNBC’s Steve Sedgwick that nuclear energy is a proven energy source with more stable prices than alternatives like natural gas. The IAEA is part of the UN system and promotes the 17 UN sustainability goals.

“The reality is that many countries, the confirmed nuclear users so to speak, but many more nations in the global south, in the developing world, are dealing with nuclear energy because nuclear energy is free of CO₂ emissions,” said Grossi. “It’s flexible. It gives stability to your energy mix, which is very important at times like these. You see what happens to the price of [natural] Gas and other things. So nuclear does and will continue to play a role. Hence my presence here at COP26. “

The Vogtle plant is described by some in the nuclear sector as the last of the world’s major nuclear reactors.

The report of the World Nuclear Association shows that many nuclear plants that are currently under construction should offer the same or even greater capacity as the Vogtle power plant. The combined output of two planned reactors in south-west England, the Hinkley Point facilities on the other side of the Severn River from Cardiff, is expected to produce a third more electricity than is expected from the two new reactors at the Vogtle plant.

Georgia Power, for its part, says that the two atomic blocks installed at the Vogtle plant will provide electricity for up to 80 years, spokesman John Kraft wrote on Tuesday when asked.

“Vogtle’s new nuclear power plants are an integral part of Georgia Power’s commitment to delivering safe, clean, reliable and affordable energy and are designed to provide customers with a reliable, carbon-free source of energy for the next 60 to 80 years,” Kraft wrote. “Working with PSC, Georgia Power has reduced its CO2 emissions by more than 60 percent by 2020. During the 2022 IRP process, the company will continue to work with the Commission to make smart investments in Georgia’s energy future. “