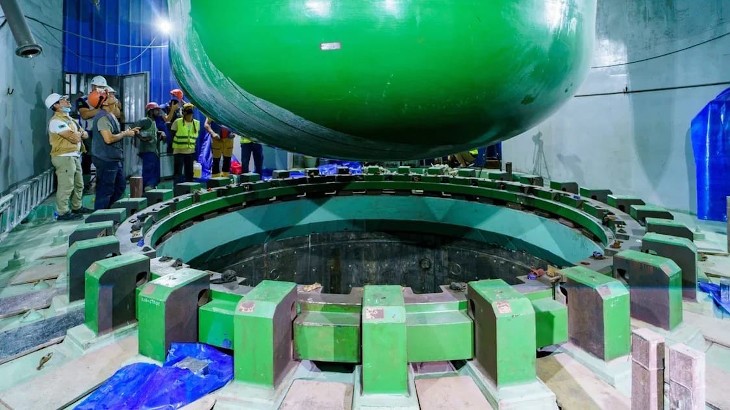 The reactor pressure vessel of Roopur 1 is maneuvered into position (Image: Rosatom)

Likhachov and Hasina both attended an event to install the reactor pressure vessel for Rooppur Unit 1, the first of two reactors at the first nuclear power plant under construction in Bangladesh.

Speaking at the event from her official residence in Ganabhaban, Hasina said the installation made it a “day of joy and pride” for the people of Bangladesh. From now on she said: “We reaffirm our position in the nuclear world and contribute to the peaceful uses of nuclear technology.”

Since nuclear energy is low in carbon, Hasina continues, “It is therefore environmentally friendly and helps to combat the negative effects of climate change. According to our plans for the country’s development, our power plant will help us achieve sustainable development.

Likhachov spoke at the Rooppur location: “The expansion of nuclear energy will not only solve the problem of energy supply in the Republic of Bangladesh, but also contribute to the development of the region and raise the standard of living of the people. Bangladesh is of a strategic nature. I am sure that Russian and Bengali specialists in both energy and other fields will have to implement more than one joint project, ”he said.

Construction of the Rooppur power plant began in November 2017. The first reactor is expected to produce electricity in 2023 and the second in 2024. These are VVER-1200 units.

Rooppur is located 160 km northwest of Dhaka on the banks of the Ganges in the Pabna district. Hasina said the country’s next nuclear power project will be in the south of the country, but did not name a location.

Likhachov praised the 20,000 employees currently working in Rooppur. He and Hasina discussed the training of Bangladeshi workers and experts to take on a leading role in their operation.

We have to wonder why small modular reactors and the re …