Moving the tiny molecules of hydrogen is no small feat.

Author of the article: 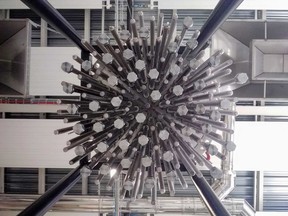 A hydrogen molecule is tiny. So tiny, in fact, that trying to store and transport it via existing tanks and pipes can end up causing cracks in steel. If hydrogen is to become a clean fuel of the future, urgent technological solutions are needed to keep it in place and move it at will.

While there are existing methods to store and transport hydrogen, they can be prohibitively expensive, especially compared to moving around its carbonaceous cousin natural gas. H2SITE says that transporting hydrogen could cost as much as three times the cost of hydrogen production. The startup offers to provide that service at a fraction of a cost, if its technology can scale.

There are two modes in which H2SITE’s technology works. First is to use existing natural-gas pipelines to move hydrogen from where it’s produced to where it is consumed. These pipes can carry about 30% hydrogen when mixed with natural gas. The idea is that diluted hydrogen will be less corrosive on existing steel infrastructure. Freshly produced hydrogen is injected into a pipeline containing natural gas, close to where hydrogen is made, and then recovered using H2SITE’s filter where it needs to be consumed.

“It’s like being able to separate a great Bordeaux wine after it’s mixed with a common wine,” said Sebastien Arbola, executive vice president at Engie.

No sieve in the world can filter out hydrogen (or separate a Bordeaux from supermarket wine). So H2SITE makes use of some clever chemistry that exploits hydrogen’s liking for certain metals such as palladium. Under the right conditions of heat and pressure, a hydrogen atom on the surface of a palladium alloy can split apart and reform when the temperature and pressure are lower. That means H2SITE can filter hydrogen at 99.9% purity from a pipe carrying between 5% and 30% hydrogen with the rest being natural gas.

That’s not all. If it’s not pipes, hydrogen (H₂) is likely to be moved around in ships — not as itself but trapped within ammonia (NH₃) or methanol (CH₃OH). That’s because ammonia can be easily turned into a liquid and methanol is already a liquid. There are currently projects being developed in countries like Australia that have plenty of space for solar and wind farms where hydrogen is produced, converted to ammonia, moved on ships, and then hydrogen is recovered by undoing the chemical reaction.

Obviously, the process of converting hydrogen to ammonia and back is highly energy intensive. Bringing down the cost of ammonia cracking will be key to making large investments to scale up hydrogen production for exports, according to Anja-Isabel Dotzenrath, executive vice president of gas and low carbon energy at BP Plc. “What we need to address is the cost of ammonia cracking,” Dotzenrath said in a recent interview about the company’s plans for a green hydrogen hub in Australia.

H2SITE’s second mode of operation causes it to become a cracker for ammonia or methanol. All that needs to be done, according to Andrés Galnares, H2SITE’s chief executive officer, is to increase the number of palladium membranes and tweak the temperature and pressure at which the reactor is run.

“It is early days” for H2SITE, said Arbola. The startup has reactors that can be used to filter out 40 kilograms of hydrogen per day, whereas its commercial units will be able to handle 200kg and 500kg respectively. Once scaled up, Galnares says that the cost of filtering the clean-burning fuel will be about $0.80 per kilogram of hydrogen.

The startup already has three sites where the technology will be tested. In the UK, ammonia made with renewable hydrogen will be converted to hydrogen. In Spain, a consortium of energy companies and research centers will test the generation, injection and transportation of hydrogen, with H2SITE providing reactors for filtering. In France, H2SITE’s reactors will generate hydrogen for vehicles.

Engie’s Arbola is clear that in building out hydrogen infrastructure or repurposing existing pipelines, it’s important to ensure that hydrogen doesn’t leak. That’s because, while hydrogen isn’t a greenhouse gas, it can extend the life of existing potent warming gases like methane or cause the production of another greenhouse gas ozone.

With natural gas prices at such highs, clean energy research group BloombergNEF finds that green hydrogen is now cheaper than natural gas in eight European countries. That means you can expect more startups with technologies that work to make the hydrogen economy a reality.

Sign up to receive the daily top stories from the Financial Post, a division of Postmedia Network Inc.

Thanks for signing up!

A welcome email is on its way. If you don’t see it, please check your junk folder.

The next issue of Financial Post Top Stories will be in your inbox soon.

We encountered an issue signing you up. Please try again

Postmedia is committed to maintaining a lively but civil forum for discussion and encouraging all readers to share their views on our articles. Comments may take up to an hour for moderation before appearing on the site. We ask you to keep your comments relevant and respectful. We have enabled email notifications—you will now receive an email if you receive a reply to your comment, there is an update to a comment thread you follow or if a user you follow comments. Visit our Community Guidelines for more information and details on how to adjust your email settings.

Has the Russia-Ukraine been blown up the global nuclear order?