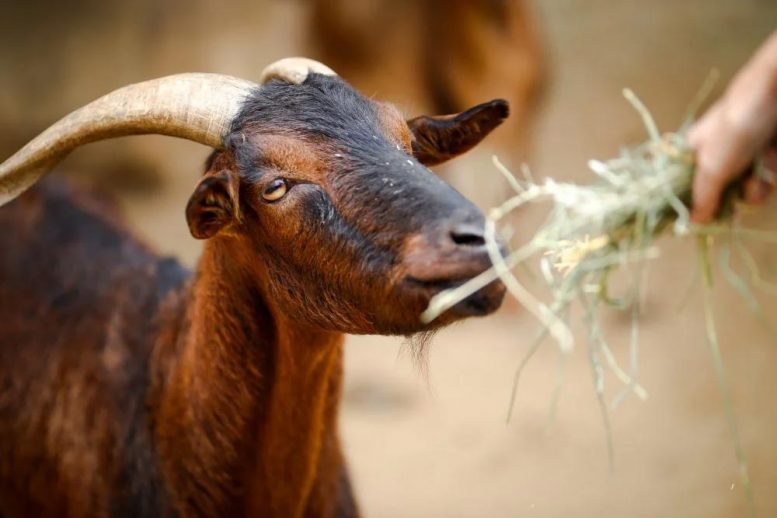 Biofuels & Chemical Production From the Mysteries of a Goat’s Gut

From biofuels and other commodity chemicals to methane production, the genome study explores the secrets of a goat’s gut.

Michelle O’Malley has long been inspired by gut microbes. Since she began studying the digestive tract of herbivores, the professor of chemical engineering at UC Santa Barbara has led several graduate students, received early and middle career awards (including recognition from President Obama), achieved tenure and the position of a full professor. She even had three children on the way. One constant through everything: goat droppings.

“This was the longest single effort in my laboratory,” said O’Malley, who and her research team started an ambitious project in 2015 to characterize intestinal microbes in large herbivores. The purpose? To understand how these animals obtain energy from plant material through their microbiomes, especially from fibrous non-food parts in which sugar is trapped behind hard plant cell walls. Understanding this process could reveal methods of extracting the raw materials required for a wide variety of chemicals required for modern life – from biofuels to pharmaceuticals – from abundant, renewable plant parts. This, in turn, could reduce or even eliminate our reliance on limited resources for these materials.

Now O’Malley has reached another milestone. In an article in the journal Nature Microbiology, she and her team report the results of more than 400 parallel anaerobic enrichment experiments, which include more than 700 previously unknown microbial genomes and thousands of new enzymes, as well as a possible mechanism for a large part of the methane becomes often blamed on cows and goats.

“One of the things we wanted to do with this study was ask ourselves if we could learn the bioprocessing lessons that the goat digestive tract has to offer,” said O’Malley. Like all ruminants, goats have gut microbiomes that have evolved over millions of years to secrete powerful enzymes that break down tough plant parts and allow animals to access food from a wide variety of plants.

“The aim of the study is really to learn about the microbes and, most importantly, the teams of microbes that do these difficult tasks,” she said.

Of particular interest to the researchers were the non-bacterial inhabitants of the goat intestinal microbiome – “little players” like anaerobic fungi that make up a tiny fraction of the bacterial-dominated population. In addition to being rare, these members of the community are difficult to cultivate, O’Malley said. While gut microbiome research has been going on for a long time, most studies ignore the contributions of rare members of the microbiome.

“Nobody had really looked into the effects of these rare members,” she said.

Over 400 parallel fecal enrichment experiments carried out by Elway, a goat from San Clemente Island who lives in the Santa Barbara Zoo, the researchers degraded populations of biomass-degrading microbes using various biomass substrates. Some of these populations were further shaped using antibiotics to inhibit the growth of bacteria, with rarer microbes such as fungi and methanogens (unicellular organisms from the archaeal domain) dominating.

“And then we sequenced all of these cultures,” said O’Malley. “We fragmented that DNA Sequences back together to reconstruct high quality genomes and that gave us a collective picture of who was there. Then we scoured those genomes for enzymes and pathways that gave us an indication of what each microbe in the microbiome was doing. “O’Malley laboratory researchers sequenced these samples as part of the JGI Community Science Program at the Department of Energy’s Joint Genome Institute (JGI); For this study, they worked with JGI experts in metagenome sequencing and fungal genomics.

According to the study, the team discovered more than 700 novel microbial genomes that are “unique at the species level”. There were also rare mushrooms that they had previously isolated from large herbivores.

“But this was the first time we’ve actually seen them in action, in their normal community,” said O’Malley.

It turns out that for their small population, fungi play a disproportionately large role in breaking down biomass.

“They make the lion’s share of the biomass-degrading enzymes that the community depends on,” noted O’Malley. In addition, according to the paper, fungi have other strategies, such as the ability to physically penetrate plant cell walls and expose surfaces on which these enzymes can act.

The researchers also found that with the increased rate of biomass degradation, there was an increase in methane production in the mushroom-dominated consortia. While both intestinal bacteria and intestinal fungi enter cross-domain partnerships with methanogens and essentially pass on carbon to the Archaeans, who ferment it into natural gas, fungi appear to be more efficient at this.

“We believe the fungi are more effective in diverting carbon against methane,” said O’Malley. “In other words, fungi don’t produce by-products like bacteria do. In addition to some methane, bacteria produce additional short-chain fatty acids and other chemical products. But the mushrooms may have a more direct way of delivering materials to the methanogens. “This suggests, according to the paper, that” fungi play a bigger role in methane release than previously recognized. “

These and other research insights bring us closer to developing technologies that use microbes to make industrially important chemicals from cellulose, the most abundant organic compound on the planet. O’Malley and her group are focused on understanding the roles and interactions between members of these complex rumen communities, and they look to a future where designed microbial communities can create value-added chemicals.

“Can we build a bioreactor that houses not just one type of microbe, but several or dozen? Can we really do complex chemistry like nature? That’s the ultimate goal here, ”said O’Malley.

Pyatt: Texans paying the price for deregulated energy system, which will only get worse if not fixed | COMMENTARY – Baltimore Sun