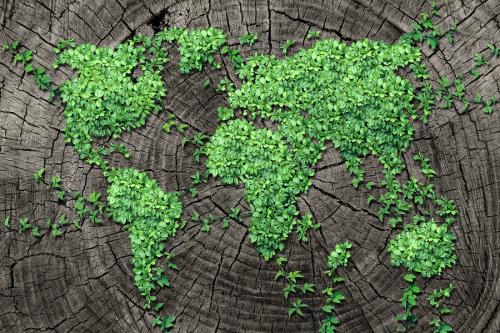 President Biden today signed the Infrastructure Investment and Jobs Act (IIJA), also known as the Bipartisan Infrastructure Package. The bill, roughly 2,700 pages in length, mirrors the bipartisan legislation passed by the U.S. Senate in August, which addresses a range of topics related to environment, energy, and climate policy, summarized by B&D. That bill was adopted by the House of Representatives late in the evening of November 5 after months of fractious negotiations between different factions of the Democratic caucus. It calls for spending approximately $1.2 trillion, including approximately $550 billion in new spending, over the next eight years. In addition to significant spending on “traditional” infrastructure like roads and bridges, the IIJA includes major provisions important to the energy industry, ranging from significant support for electrification of the transportation system to building out the nation’s electric transmission grid and renewable power. The IIJA creates major new investments, and major new programs, touching nearly every aspect of the energy industry.

With the enactment of the IIJA, the onus now falls on federal agencies to administer the many programs created, expanded, or supported by the legislation. In many cases, the IIJA simply adds funding to existing programs. In those cases, the administrative apparatus necessary to carry out the programs is already in place and it should therefore be relatively easy for the agencies to revamp the program. In other cases, new programs have been created, and it is likely to take considerable time for the agencies to develop the necessary administrative mechanisms to roll out the programs. Companies should pay close attention to these programs, both as a potential source of grants or other financial support, and for the systemic impacts programs of this size are likely to have on the industry.

The IIJA includes provisions aimed at addressing climate change by improving infrastructure resiliency or mitigating the adverse effects of climate change. These include:

A major expansion of the nation’s electric transmission system is widely considered necessary to achieve the Biden Administration’s climate goals, which include a GHG-neutral electricity sector by 2035 and net-zero GHG emissions economy-wide by mid-century. To respond to this need, the IIJA includes provisions aimed at promoting construction of new electric transmission and easing regulatory barriers to transmission development. It authorizes a total of $65 billion for these purposes. Specific provisions include:

The IIJA includes provisions aimed at protecting the nation’s electricity system from cyberattacks. These are:

Three provisions in the IIJA are aimed at supporting energy storage systems:

Recognizing that rare earth minerals like lithium will be essential for the rapid expansion of electric vehicles, utility-scale energy storage technologies, and other technologies that depend on high-capacity batteries, the IIJA includes several provisions aimed at identifying and securing supplies of these critical materials. These include provisions to improve the United States Geological Survey’s capacity to map the location of critical minerals, to share information about those locations, and to support research related to supplying those minerals. The legislation also includes a provision to expedite and streamline the federal permitting process so that critical minerals can be obtained domestically, and particularly from U.S. public lands, rather than from overseas sources. It also directs the Energy Information Administration to assemble forecasts of demand for critical minerals based on demand from electric vehicles and other battery-based devices in the electric sector. Finally, it expands DOE’s existing loan guarantee program to include projects that increase the domestic supply of critical minerals.

The IIJA significantly expands federal support for carbon capture, sequestration, and utilization technologies. New programs include a grant program to support utilization of captured carbon in new products, a program of loan guarantees and grants to expand pipelines that transport captured carbon to sites where it can be utilized, a new program aimed at supporting large-scale commercialization of carbon capture technologies, and amendments to the permitting process for carbon sequestration projects located both onshore and on the Outer Continental Shelf. The IIJA also amends the Internal Revenue Code provision governing issuance of tax-free bonds for public facilities to allow bond proceeds to be used for carbon capture projects. The legislation also authorizes federal support for four regional hubs to support direct air capture technology that would remove carbon dioxide directly from the atmosphere and sequester it or incorporate it into usable products. Finally, the legislation authorizes about $4.6 billion over five years to support carbon capture pilot and demonstration projects.

The IIJA contains a subsidy mechanism aimed at preserving existing nuclear plants operating in the nation’s “organized” electricity markets, those that are administered by regional transmission organizations, or independent system operators. In recent years, nuclear operators have struggled to break even when selling power into these organized markets. The mechanism is designed to ensure that these nuclear reactors, and the carbon-free power they provide, remain in operation despite unfavorable economic conditions. The legislation also expands nuclear research programs to cover small modular reactors and other advanced nuclear technologies. It includes an appropriation of slightly more than $3.2 billion to support research into advanced nuclear technologies.

The IIJA contains several provisions concerning hydroelectric power, primarily aimed at encouraging the installation of new generation on existing dams or improving the safety and environmental performance of that nation’s stock of existing dams.

The new legislation includes a variety of programs aimed at promoting energy efficiency, including both new programs and new funding for existing programs. These include:

The Public Utility Regulatory Policies Act of 1978 requires state utility regulators and the governing bodies of publicly-owned utilities to consider, but not necessarily adopt, a list of recommended policies. The IIJA adds two policies to this list:

The IIJA creates major new investments, and major new programs, touching nearly every aspect of the energy industry. Companies in the industry should pay close attention to these programs, both as a potential source of grants or other financial support, and for the systemic impacts programs of this size are likely to have on the industry.