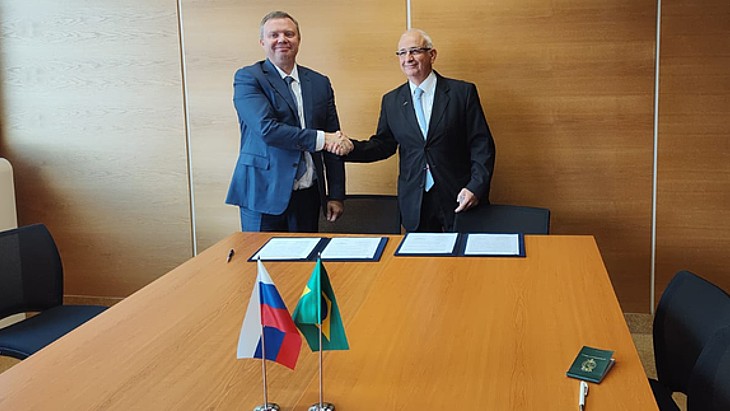 The CEO of ENBPar, a state-owned company linked to the Ministry of Mines and Energy, said: “The idea is for us to take advantage of the great experience they have in the nuclear sector, learn about the entire production cycle of this type of energy and be able to apply it in Brazil.”

The MoU will allow for “more dialogue between the two countries on the construction, operation and decommissioning of state-of-the-art, high- and small-capacity nuclear power plants”, including floating plants.

It says mutual cooperation areas include: Maintenance and life cycle, operation and decommissioing of existing plants in Brazil; construction, operation and decommissioning of new high-capacity small power plants based on Russian technologies in the Brazil; supply of existing and future nuclear power plants in Brazil with goods and services in the nuclear fuel cycle including uranium products such as HALEU, uranium conversion and enrichment services as well as solutions for the management of spent nuclear fuel and radioactive waste resulting from its processing; and also the training of “specialists in the field of the application of nuclear energy for peaceful purposes”.

It also seeks to reinforce the agendas of bilateral interest such as the promotion of nuclear’s green credentials, with mutual visits, organization of seminars and workshops and “interaction with the IAEA and other international organizations to promote nuclear energy as a low-carbon ‘green’ energy source that is effective at combating climate change and achieving global energy targets for sustainable development”.

“Conversations and actions on the transfer of technologies to form a cluster of companies aimed at services and supplies for the nuclear sector” – and also related to hydroelectric plants – will also be facilitated.

ENBPar works with clean energy, from the Angra Nuclear Power Plants, through Electronuclear and will start working with mining and manufacturing of nuclear fuel, by Industrias Nucleares do Brasil.

Russia and Brazil already have ties in the nuclear energy field with an MoU signed in 2017 by Rosatom and Brazil’s Electrobras and Electronuclear to promote cooperation in nuclear power.

Brazil currently has two nuclear reactors generating about 3% of its electricity and work is expected to resume shortly, after a seven-year break, on unit 3 of the Angra nuclear power plant in Rio de Janeiro.

But it is looking to further expand its nuclear capacity – in January Brazil began the process of identifying sites for new nuclear power units it wants to have in operation by 2050. And Brazil’s President Jair Bolsonaro and Russian President Vladimir Putin discussed possible bilateral nuclear energy cooperation when they met in February this year.

And at the COP26 meeting in Glasgow last year, the Minister of Mines and Energy, Bento Costa Lima, said nuclear energy “was, is and will be essential and fundamental for the energy transition,” adding that “we will add 10 GW in the next 30 years.”

In June, Brazil’s Electronuclear and France’s EDF signed a fresh MoU valid for five years promoting mutual cooperation in the development of nuclear energy projects. It was a renewal of a previous cooperation agreement from 2018, but with expanded scope, including small modular reactors, hydrogen generation and more research and development.