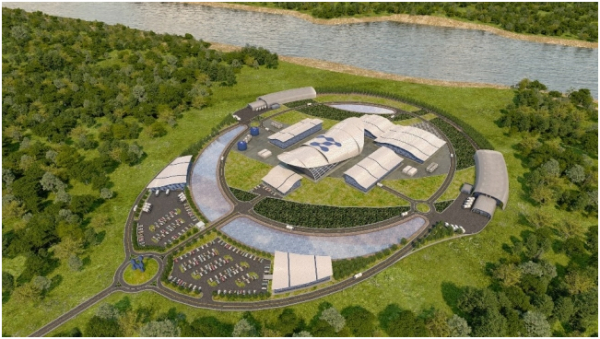 A picture of the planned NuScale Small Module Reactor (SMR)

The small modular reactors (SMR) business is developing into a future energy business worldwide. An SMR is a small nuclear power plant with a power output of 300 MW or less. It attracts attention because it is very safe and does not cause any CO2 emissions.

Doosan Heavy Industries & Construction will begin manufacturing the main parts of an SMR to be built in Idaho, USA, beginning in the first half of 2022. The SMR project is funded by UAMPS, a power generation company, and is expected to go into commercial operation in 2029.

Doosan Heavy Industries & Construction entered the SMR business by signing a commercial agreement with NuScale Power in the United States. NuScale is the first company to pass all of the U.S. Nuclear Regulatory Commission (NRC) SMR design certification tests in 2020.

Korean investors, including Doosan Heavy Industries & Construction and IBK Investment & Securities, invested $ 44 million three times in NuScale in 2020. Doosan plans to supply at least $ 1.3 billion worth of SMR equipment and materials to overseas markets including the US NuScale.

SMRs are characterized by the integration of critical equipment such as reactors, steam generators, coolant pumps, and pressurization devices into a single body one-tenth the size of a large nuclear power plant. The accident rate is one thousandth that of current nuclear power plants. “Because of their small size, they are easy to install and mass-produce, which means that SMR construction costs are lower than nuclear power plants. SMRs are also closely related to hydrogen, as hydrogen can be produced by electrolysis using hot water vapor.

For this reason, Japan, which had pushed for a policy to shut down all nuclear power plants due to the Fukushima nuclear accident in 2011, also got into the SMR business. Japanese manufacturing company JGC invested US $ 40 million in NuScale on April 5th. JGC has decided to participate in the Idaho construction project. JGC works together with NuScale’s parent company Floor in the Engineering, Procurement and Construction (EPC) segment. JCC plans to build SMRs itself in the future.

Russia is the fastest runner in SMR technology development. Russia has been operating floating nuclear power plants with SMR since 2019. The floating Russian nuclear power plant Akademik Lomonosov produces 70 MW of electricity in the Chukotka Autonomous Region in the Far East, where power transmission systems are installed and large power plants are difficult to build. It can run for three to five years without refueling, which can also significantly reduce power generation costs.

The UK, which had decided to cease operating nuclear power plants in 2035, recently decided to work with the Rolls-Royce consortium to spend at least £ 200 million to build 16 SMR over a five-year period. The UK’s National Nuclear Laboratory (NNL) predicts that the capacity of SMRs will be expanded to 65 QWe to 85 GWe (1 GWe is the capacity of a nuclear reactor) by 2035. The market will be valued at £ 240 billion to £ 400 billion.

For this reason, Doosan Heavy Industries & Construction is looking to seriously increase the number of orders in the future for the world’s best nuclear power module manufacturing technology.