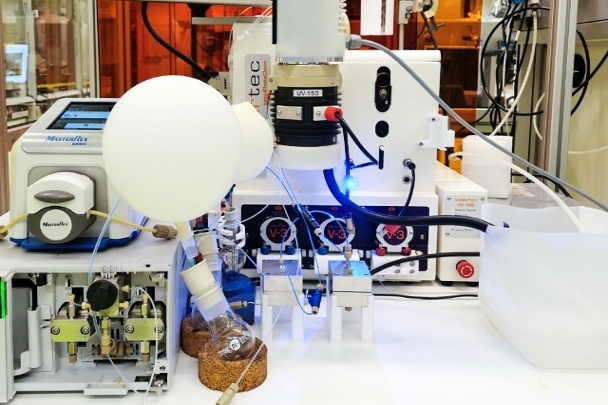 Bringing photocatalysis from laboratory to industry

Photocatalysis makes it possible to drive chemical conversions directly by sunlight, or by LED light powered by renewable electricity. As such, it presents an opportunity to render the chemical industry more sustainable and less dependent on fossil resources. However, the cost of a photocatalyst can be quite high, which often hampers industrial interest in photocatalysis.

At the University of Amsterdam’s Van ‘t Hoff Institute for Molecular Sciences, the Noël Research Group develops flow chemistry systems that help materialize the promises of photocatalysis. In Nature Communications they now describe how they have combined the flow chemistry approach with the use of nanofiltration for in-process catalyst recycling. Since this renders the cost of the catalyst essentially irrelevant, this presents an important step in bringing photocatalysis to industrial application.

In earlier research, the group developed a flow reactor that employed a decatungstate photocatalytist (TBADT) for so-called hydrogen atom transfer (HAT) processes. Combining this with the nanofiltration system, they were able to achieve a catalyst recycling percentage of over 99% in various HAT reactions (such as photocatalytic C(sp3)-H alkylation and amination). They report turnover numbers (TONs) of well over 8000, which according to Prof Noël is a record number for photocatalysts at least in his lab; it might even be the highest TON for any synthetic photocatalysis experiment. He considers the newly developed process an important stepping stone toward sustainable ‘real life’ (ie process-ready) photocatalysis.

Abstract of the paper

Photocatalytic hydrogen atom transfer (HAT) processes have been the object of numerous studies showing the potential of the homogeneous photocatalyst tetrabutylammonium decatungstate (TBADT) for the functionalization of C(sp3)-H bonds. However, to translate these studies into large-scale industrial processes, careful considerations of catalyst loading, cost, and removal are required. This work presents organic solvent nanofiltration (OSN) as an answer to reduce TBADT consumption, increase its turnover number and lower its concentration in the product solution, thus enabling large-scale photocatalytic HAT-based transformations. The operating parameters for a suitable membrane for TBADT recovery in acetonitrile were optimized. Continuous photocatalytic C(sp3)-H alkylation and amination reactions were carried out with in-line TBADT recovery via two OSN steps. Promisingly, the observed product yields for the reactions with in-line catalyst recycling are comparable to those of reactions performed with pristine TBADT, therefore highlighting that not only catalyst recovery (>99%, TON > 8400) is a possibility, but also that it does not happen at the expense of reaction performance.

Making a case for femto-phono-magnetism in ultrafast times – Phys.org