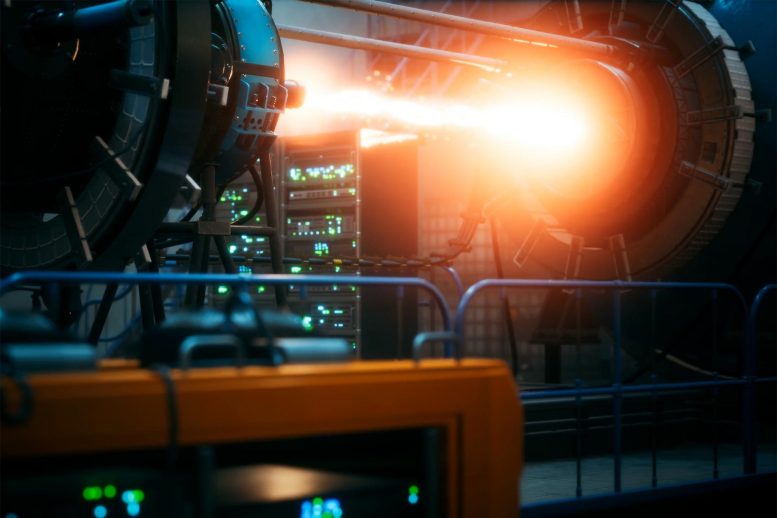 Nuclear fusion is the process that powers the sun and all other stars. During fusion, the nuclei of two atoms are brought so close together that they fuse together and release large amounts of energy.

Replicating this process on Earth has the potential to deliver nearly unlimited electricity with virtually zero carbon emissions and greater safety, and without the same percentage of nuclear waste as the fission.

However, it is not an easy task to build a mini-star on Earth and keep it together in a reactor. It requires immense temperatures and pressures and extremely strong magnetic fields.

At the moment we don’t have any materials that can withstand these extremes. But researchers like me are working to develop them, and we’ve found some exciting things along the way.

There are many ways to contain nuclear fusion reactions on Earth, but the most common is a donut-shaped device called a tokamak. In the tokamak, the fuels for the reaction – hydrogen isotopes called deuterium and tritium – are heated until they become a plasma. A plasma is when the electrons in the atoms have enough energy to escape from the nuclei and float. Since, unlike a normal gas, it consists of electrically charged particles, it can be contained in a magnetic field. This means that it doesn’t touch the reactor sides, but rather floats in the middle in the donut shape. In a tokamak fusion reactor.

When deuterium and tritium have enough energy, they fuse together, form helium, neutrons and release energy. The plasma must reach temperatures of 100 million degrees Celsius for large amounts of fusion to take place – ten times hotter than the center of the sun. It has to be much hotter because the sun has a much higher density of particles.

Even though the reactor is mostly contained in a magnetic field, it still has to withstand enormous temperatures. In Iter, the world’s largest fusion experiment, which is expected to be built by 2035, the hottest part of the machine would reach around 1,300.

While the plasma is mainly contained in a magnetic field, there are times when the plasma collides with the walls of the reactor. This can lead to erosion, planting of fuel in the walls, and changes in material properties.

In addition to the extreme temperatures, we also have to take into account the by-products of the fusion reaction of deuterium and tritium such as neutrons with extremely high energy. Neutrons are not charged and therefore cannot be contained in the magnetic field. This means that they hit the walls of the reactor and cause damage.

All of these incredibly complex challenges have contributed to tremendous advances in materials over the years. One of the most notable were high temperature superconducting magnets used by various fusion projects. These behave like superconductors at temperatures below the boiling point of liquid nitrogen. That sounds cold, but it is high compared to the much colder temperatures that other superconductors require. During the fusion, these magnets are only a few meters away from the high temperatures in the tokamak, which creates an enormously large temperature gradient. These magnets have the potential to create much stronger magnetic fields than traditional superconductors, which can drastically reduce the size of a fusion reactor and accelerate the development of a commercial fusion.

We have developed some materials to handle the various challenges we present them in a fusion reactor. The frontrunners are currently reduced activation steels, the composition of which has been changed from conventional steels so that the degree of activation due to neutron damage is reduced, and tungsten.

One of the coolest things in science is something that is initially seen as a potential problem and can turn into something positive. Fusion is no exception, and a very niche but notable example is the case of tungsten fluff. Fuzz is a nanostructure that forms on tungsten when exposed to helium plasma during fusion experiments. Originally seen as a potential problem due to fears of erosion, research is now being conducted into fusion applications, including solar water splitting, which is broken down into hydrogen and oxygen.

However, no material is perfect, and there are still some remaining problems. These include the large-scale manufacture of materials with reduced activation and the intrinsic brittleness of tungsten, which makes the job challenging. We need to improve and refine the existing materials we have.

Despite the tremendous advances in materials for fusion, there is still a lot of work to be done. The main problem is that we have to rely on multiple proxy experiments to restore potential reactor conditions and try to piece this data together, often using very small samples. Detailed modeling work helps extrapolate predictions of material performance. It would be much better if we could test our materials in real situations.

The pandemic had a huge impact on materials research as it was more difficult to conduct experiments in real life. It’s really important that we continue to develop and use advanced models to predict material performance. This can be combined with advances in machine learning to identify the key experiments we need to focus on and identify the best materials for the job in future reactors.

New materials were typically made in small batches, with the focus only on making enough materials for experimentation. In the future, more companies will keep working on the merger and there will be more programs working on experimental reactors or prototypes.

Because of this, we come to a point where we need to think more about industrialization and supply chain development. As we approach prototype reactors and hopefully power plants in the future, developing robust supply chains on a large scale will be a major challenge.

Originally published on The Conversation.