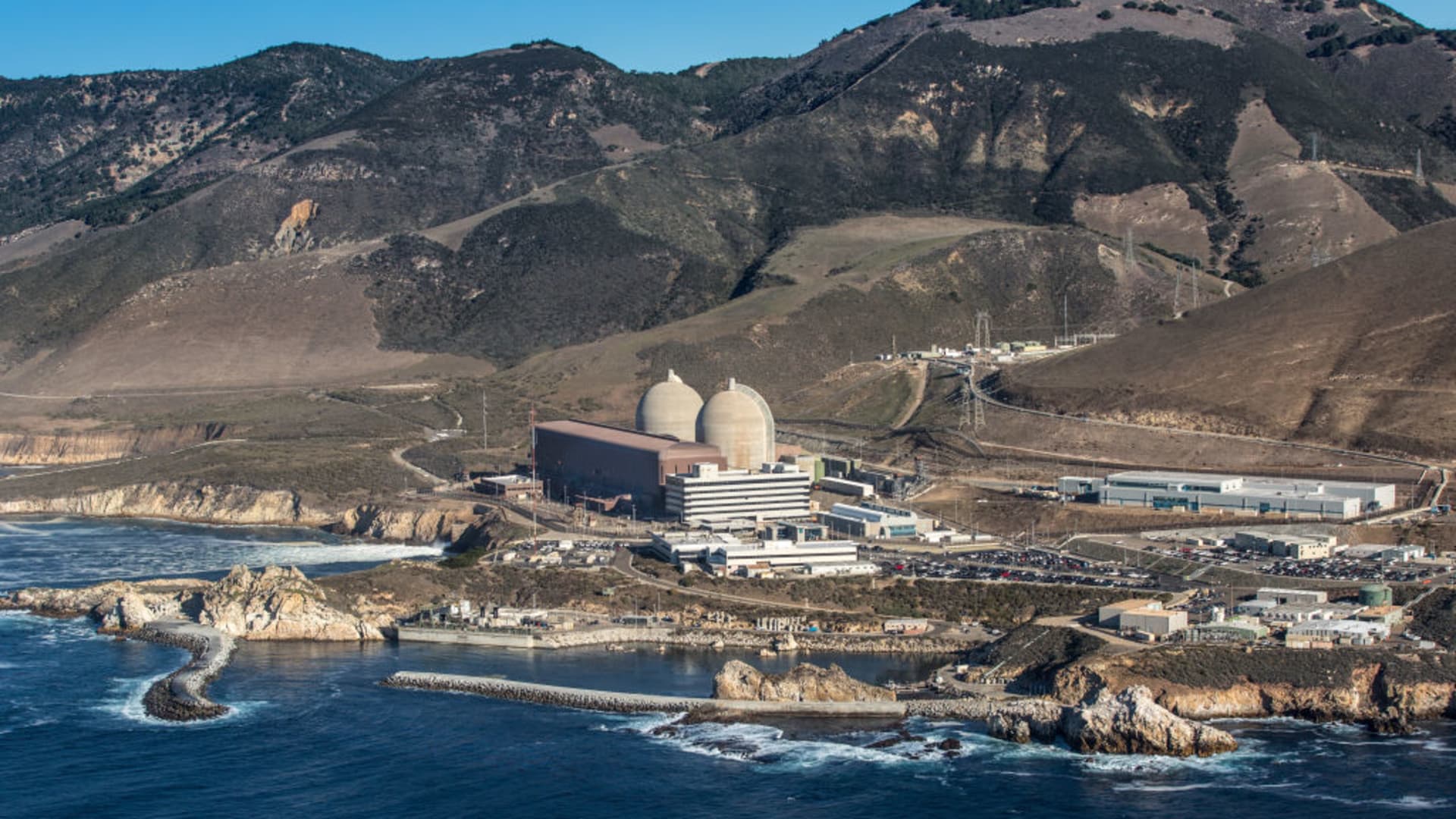 Aerial view of the Diablo Canyon, the only operational nuclear plant left in California, viewed in these aerial photos taken on December 1, 2021, near Avila Beach, California. Set on 1,000 acres of scenic coastal property just north and west of Avila Beach, the controversial power plant operated by Pacific Gas & Electric (PG&E) was commissioned in 1985.

California lawmakers are circulating draft legislation that would keep the state’s last operating nuclear plant, Diablo Canyon, open beyond its planned 2025 closure date, although there are still significant logistical and political challenges ahead before that could happen.

The plan to close Diablo Canyon has been underway since 2016. But as the dire symptoms of climate change — heat and drought — have been bearing down hard on the state, and delays have slowed the construction of wind and solar energy sources, lawmakers and representatives for local utility PG&E are reconsidering.

The Diablo Canyon power plant currently supplies 8.6% of the state’s electricity and 17% of the state’s zero-carbon electricity supply. The two operating reactors are scheduled to be retired November 2, 2024, and August 26, 2025. But California will probably not be able to ramp up its wind and solar renewable energy sources fast enough to meet that capacity.

“Two things changed since last year,” David Victor, professor of innovation and public policy at the School of Global Policy and Strategy at UC San Diego, told CNBC. “One is the grid operators have focused even more on reliability and the challenges in maintaining grid reliability. An unreliable grid is not only bad for the economy but also very bad for politicians.”

“The other thing that changed, which is probably even more important, it is the governor signaled his interest in a possible extension with an offhand comment to the Los Angeles Times. That was a few months ago and touched off theory of analysis and lobbying, ” Victor said. “That has culminated in today’s proposal.”

A copy of the draft legislation was circulated to lawmakers on Thursday, according to Gov. Newsom’s office, and was shared with CNBC on Monday.

The draft legislation says that the California energy grid is going to struggle to keep up with demand.

It then cites the difficulty of ramping up renewable energy sources in time to make the transition.

“Because of supply chain disruptions, the impact of tariff disputes, and other delays in installation of new clean energy generation and storage systems, including solar and wind projects with battery storage, there is substantial risk that insufficient new clean energy supplies will be online in time to ensure electricity system reliability when the Diablo Canyon powerplant is scheduled to be decommissioned,” the legislation draft reads.

If California does not extend operations of Diablo Canyon, then the state will end up depending on sources of energy that release greenhouse gasses, which cause climate change to accelerate, the draft legislation argues.

Newsom’s office pointed out that it has been working to make it faster to bring renewable sources of energy online.

“In June, the state took action to streamline permitting for clean energy projects to bring more renewable energy generation and storage online,” the governor’s office said in a written statement provided to CNBC.

PALM SPRINGS, CA – MARCH 27: Giant wind turbines are powered by strong winds in front of solar panels on March 27, 2013 in Palm Springs, California. According to reports, California continues to lead the nation in green technology and has the lowest greenhouse gas emissions per capita, even with a growing economy and population. (Photo by Kevork Djansezian/Getty Images)

Not easy to reverse course

Victor is in favor of extending Diablo Canyon’s life. But he also knows that a lot of effort went into the shutdown plan.

“And they are going to feel betrayed. So the politics of this could be very nasty. And the utility is stuck right in the middle — with big risks,” Victor told CNBC.

While conversations in the California legislature are a critical step for initiating the processes to keep Diablo Canyon open, there are a lot of logistical procedures and staffing needs which would need to be addressed to keep the plant open.

“The new proposal, along with federal incentives, will help a lot. But people seem to forget that there’s a whole lot of machinery that needs to happen to keep a plant open. An extension needs to be filed with a Nuclear Regulatory Commission. Crucially , workers are needed and until now pretty much all the workers were focused on getting different jobs and the utility was helping them find those jobs,” Victor said.

“You can imagine solving all these problems individually but doing it all at once on a tight schedule will be challenging,” he said.

If Diablo were to get try to get its operating license extended, the state of California would loan the utility operating the plant, PG&E, as much as $1.4 billion to help with the costs associated with relicensing, according to the memo from the governor’s office. Also, PG&E could apply to get federal money from the US Department of Energy’s $6 billion program passed as part of Bipartisan Infrastructure Law which was intended to preserve the existing US fleet of nuclear power reactors. “The proposed language provides a pathway for relicensing at the US Nuclear Regulatory Commission so that PG&E may apply for this funding,” the memo from the governor’s office says.

“Earlier this year, Governor Newsom reached out to ask us to evaluate keeping Diablo Canyon open beyond its scheduled retirement in 2024 and 2025 to support the capacity and reliability of the state’s electric supply system,” Poppe said. “We’re exploring the possibility of keeping this plant open for California’s benefit. It is not an easy option and it will require much coordination between the state, multiple regulatory bodies and PG&E as well as many others impacted by the outcome of this decision. “

Poppe said that if Diablo Canyon is to be extended, PG&E needs to know soon because there are a slew of steps it has to take to be able to keep the plant online.

“We’ve got a real sense of urgency in order to transition from being in a decommissioning posture to a life extension posture. So the most important thing to us right now is that we get certainty on the decision-making. We have to secure casks. We have to order fuel. There are some very near-term items,” Poppe said. “The actions that we would need to take if, in fact, we change the posture of the plant.”

Reversing course would be a challenge, but Poppe also noted a change in the state’s feelings about nuclear energy. “We like the fact that that plant’s value is being recognized by the state. There seems to be a kind of a shift in the attitude about the role that nuclear can play in a GHG-free economy,” Poppe said.

She said PG&E would try to get access to federal funds. “We do think that the DOE funding is a possibility and certainly the state has expressed interest in maximizing that and making sure that Diablo Canyon gets included in the DOE’s program to extend the life of nuclear,” Poppe said. “Again nationally, I think there’s been a real shift in attitude about the value of these baseload nuclear facilities. And so, given that, we’re just going to continue to work through the financials, and that will be second to making sure that the plant is ready and safe and able to operate for the state.”

But the clock is ticking. Legislation has to be passed by the end of August, and then signed into law in September, Poppe said.