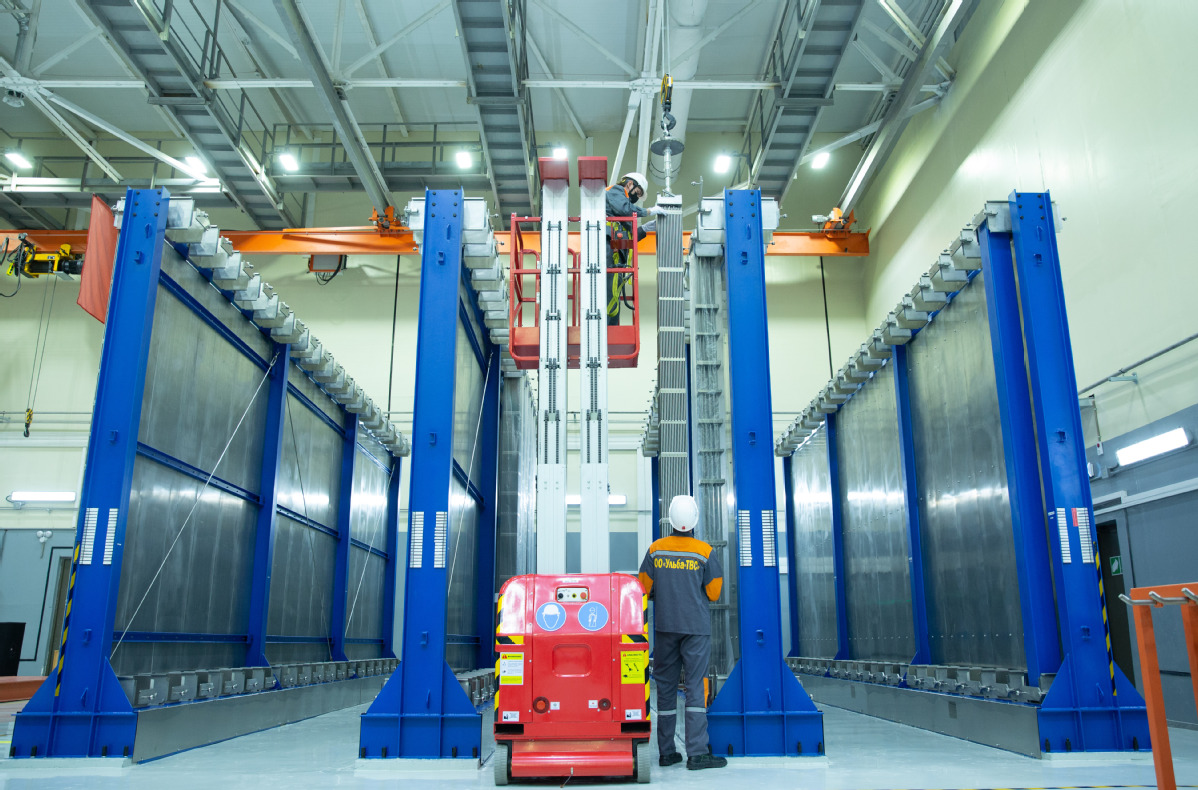 Employees are working on November 10 at a nuclear fuel plant built by a Sino-Kazakh joint venture in Ust-Kamenogorsk, Kazakhstan. The plant is expected to supply 200 tons of uranium annually for fuel assembly in China for 20 years. [Photo/Xinhua]

China General Nuclear Power Corp, the country’s largest nuclear operator, said its nuclear fuel plant, which opened in November, will continue to supply fuel to its projects at home and abroad.

CGNPC Uranium Resources Co. Ltd., a subsidiary of CGN, said the nuclear fuel plant will supply 200 tons of uranium for the fuel assemblies in China every year for 20 years.

CGN, based in Shenzhen, Guangdong Province, said it had been working intensively with Kazatomprom on uranium resource exploration, natural uranium trading and nuclear fuel pellet processing.

The two of them have jointly developed four uranium mines in Kazakhstan, namely Irkol, Semizbay, Central Mynkuduk and Zhalpak. Not only did they help secure CGN’s uranium plants abroad, but they also enabled the company to gain experience in the operation and management of uranium abroad. The company also has agreements in most uranium producing countries in the world, including Namibia, Australia and Canada.

Analysts said that with ambitious plans to expand clean power generation, it is important for China to secure nuclear fuel resources at home and abroad, while Chinese companies also have the potential to become major global players in the nuclear sector.

“CGN has long been investing in foreign uranium resources and cooperating with several uranium mines with Kazakh state companies,” said Wei. “This facility, with the capacity to power eight regular nuclear reactors, will help China secure future fuel resources and reward both countries in terms of economy and energy security.”

China is abundant in uranium that is scattered in many types of deposits. Most, however, are unconventional uranium with high exploration costs. The country relies on uranium exports from countries like Kazakhstan, Canada and Australia, all of which account for two-thirds of world production.

Li Yilun, senior vice president of CGN, previously said the company would increase its investment in overseas nuclear power projects, particularly in countries and regions participating in the Belt and Road Initiative. Since the share of green electricity generated by nuclear power will continue to rise compared to the previous year, the company’s foreign investments will also be increased.

“Since the development of nuclear power is a global decision, we trust that Chinese technology and nuclear power experts will be able to address specific problems,” said Li.

The company is also stepping up exports of its Hualong One technology, a domestically developed third generation reactor design with proprietary intellectual property jointly owned by CGN and China National Nuclear Corp.

In addition to the United Kingdom, Li said the company is cooperating with countries and regions participating in the Belt and Road Initiative, including Egypt, Bangladesh and the United Arab Emirates, not only in the use of nuclear power, but also in the adoption of clean energy sources such as Wind and photovoltaics.

Although nuclear energy makes up only a small part of China’s power structure, a rapidly increasing trend is expected in the near future.

How to be regulated: Environmental permits for activities with radioactive materials – GOV.UK