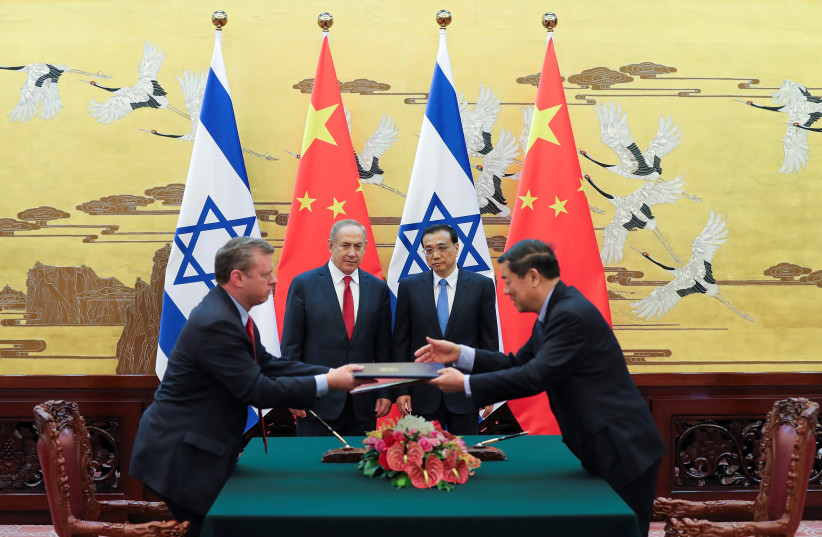 China Could Save Israel From Iran – Report

China is one of the few actors who could potentially save Israel from Iran for the sake of stability, a new report from the Institute for National Security Studies first received exclusively from the Jerusalem Post.

According to the report, China has worked with Dr. Kevjn Lim as the main author on behalf of the INSS started to present himself more strongly as a “more responsible world power”.

Against this background and because of the strong dependence of the Islamic Republic on Beijing, it could “be one of the few actors if they are ready to change the balance in the Middle East in favor of stability”.

It will not be easy, and the report even warns that a direct appeal to China to sever ties with Tehran would fail.

“Directly persuading China to break off its relations with Iran or significantly downgrade it is unrealistic and probably even counterproductive. Such a strategy would encourage a great power that prides itself on maintaining good relations with all regional actors to take sides, ”the report said.

One reason for this, writes Lim, is that “China’s motives for deepening cooperation with Iran have little to do with Israel. Instead of dissuading China from pushing relations with Iran, Jerusalem should instead persuade Beijing, as an impartial actor seeking predictability, to put pressure on Iran to moderate its destabilizing behavior. “

“In addition to a more robust and far-sighted US policy in the Middle East, this would benefit the stability of the entire region and thus Chinese trade and economic interests,” says INSS.

The report went on to say, “Israel should also urge China to adopt a stricter stance on nuclear support and proliferation,” in addition to reducing Iran’s conventional military aggression.

What influence does Israel have to convince China?

For one thing, Lim notes that until Iran moderates its threats against Israel, the Jewish state will likely continue to “downgrade and disrupt Iran’s diplomatic, economic, and military options, and certainly its nuclear program.”

These disruptions can also delay and destabilize China’s trade with Iran and the Middle East in general.

In other words, China may not force the Islamic Republic to change direction all at once in order to achieve stability, but may press restraint more regularly, just as many US governments urge Jerusalem to restrain.

The report also points to new ways to use China to contain Tehran because of the Abraham Agreement.

For example: “If Israel and its emerging Sunni allies in the Gulf and elsewhere coordinate their interactions with China, they will have a better chance of getting Beijing to consider their preferences regarding Iran.”

“At least this could lead China to more actively urge Iran to moderate its behavior … priorities in the region,” writes Lim.

The Shanghai Cooperation Organization (SCO.) Is another place where China could have a positive impact on Israel-Iran issues, according to the report. Israel has applied to the SCO for dialogue partner status, which is two levels lower than a full member.

If Israel were accepted, the Jewish state would occupy part of the same diplomatic space with Iran.

The INSS speculates that “the relative proximity in such forums enables the possibility of contacts mediated by third parties such as China (or Russia),” while progress from such contacts would likely still be very limited.

However, the report warns Israel against weighing its proximity to China with its alliance with the US and the risk of information leakage to the Islamic Republic.

It states: “The presence of Chinese state-owned companies and their subsidiaries in construction and infrastructure projects in both Iran and Israel requires careful treatment and isolation, and Jerusalem must take over the information exchange between Beijing and Tehran.”

“Some of these projects are connected to control, signaling and surveillance networks that are tied into broader urban or national networks that can be electronically disrupted and tampered with, while others are close to sensitive government locations such as the military, navy and intelligence agencies”, says it in the report.

According to INSS, “the China Railway Tunnel Group, which holds 51 percent of the shares in a joint consortium that builds much of the red line segment of Tel Aviv’s light rail network, is a subsidiary of CREC”.

But “CREC is working with the IRGC’s Khatam al-Anbia conglomerate on the Tehran-Qom-Esfahan rapid transit system,” notes Lim.

The report said, “It will be crucial for Israel to recognize the strengths and limitations of Sino-Iranian relations in order to move forward.”

Lim is Senior Risk Advisor for the Middle East and North Africa at IHS Markit Country Risk. where he runs Iran desk and is a research associate at INSS.