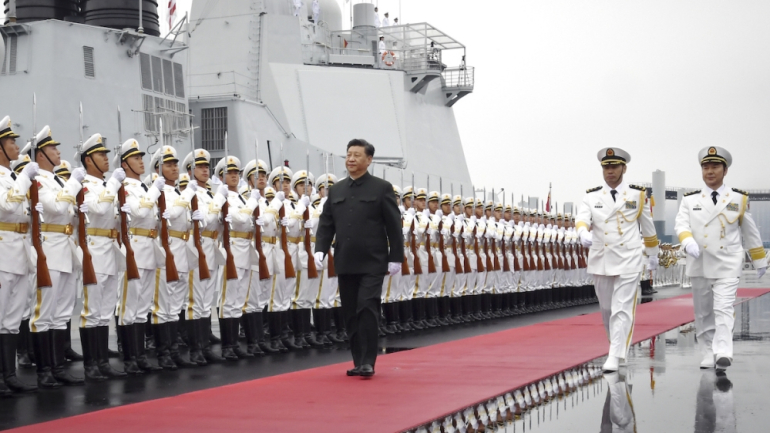 China is building its fourth aircraft carrier to bolster its maritime power in the Asia-Pacific region, and the ship is “likely to run on nuclear power,” a new report revealed on Saturday, citing sources close to the country’s military.

The South China Morning Post quoted a person close to the Chinese Navy as saying that shipbuilders are “aiming to make a major breakthrough” by building the fourth airline.

“It will be a leap in technology for the shipbuilding industry,” the source told the Post.

Another unnamed source also told the publication that Chinese officials are considering a proposal to “use nuclear power for the fourth airline”.

The person didn’t say if a final decision was made, but told the Post it was “a very brave decision that is fraught with challenges”.

Construction of the fourth ship, which had already been delayed by two years, resumed earlier this year.

There are currently two Chinese aircraft carriers in service, and a third is expected to be launched this year – none of them have nuclear capabilities.

It wasn’t until 2017 that China launched its first domestically manufactured aircraft carrier to showcase the growing technical sophistication of its defense industry.

The 50,000-ton carrier, known as Shandong, is based on the Soviet Kuznetsov-class design with a ski-jumping-style starting deck and a conventional oil-powered steam turbine power plant.

The other ship in operation is the 60,000-ton aircraft carrier Liaoning, which was purchased from Ukraine.

The third, which is expected to be operational this year, has an estimated displacement of about 85,000 tons, according to the Post report.

It was reported in 2017 that China was already building a ship at a shipyard outside Shanghai, the size of which is expected to be closer to the US Navy’s 100,000-ton Nimitz-class nuclear-powered ships, with flat flight decks and catapults that allow aircraft to take off with more bombs and fuel on board.

Aside from the two aircraft carriers in operation, China already has more than a dozen nuclear-powered submarines.

China is working to improve its carrier operations but has little experience compared to the US, which has operated multi-ship integrated carrier battle groups for decades.

China claims almost all of the energy-rich waters of the South China Sea, where it has established military outposts on man-made islands.

This claim has been declared illegal by the International Court of Arbitration in The Hague. China refused to participate in the case and later dismissed the verdict as “null and void”.

Tensions have increased since the court ruling and, to the chagrin of Beijing, the US and its allies have increased their naval drills and patrols in the South China Sea and asserted freedom of navigation on the open seas.

The United States regularly accuses China of militarizing the South China Sea and trying to intimidate Asian neighbors who may want to exploit its vast oil and gas reserves.

In December, the Shandong aircraft carrier sailed across the Taiwan Strait on its way to routine exercises in the South China Sea, just a day after a US warship passed the same stretch of sea.

In January, Beijing also passed a law explicitly allowing its coast guard to shoot foreign ships for the first time.

The Coast Guard Act empowers it to “take all necessary measures, including the use of weapons, when the national sovereignty, sovereign rights and jurisdiction of foreign organizations or individuals at sea are unlawfully violated”.

Amid concerns among the countries around the sea, China said the law was a “normal domestic” measure that was not targeted to any particular country.