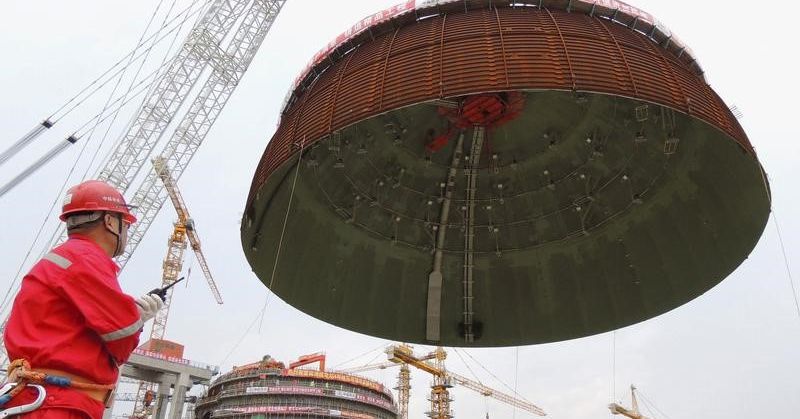 A worker looks on as the dome roof of a generator unit is lifted to be installed, at Tianwan Nuclear Power Plant, in Lianyungang, Jiangsu province, China, September 26, 2015. China’s economic growth will be largely stable in the third quarter as the impact from a stock market plunge will be limited, the National Bureau of Statistics said on Friday. REUTERS/Stringer

Sichuan relies on dams for a whopping 80% of its power and exports surplus to other areas, especially industrial centers on the coast. But the relationship is one way; inadequate transmission lines and immature spot markets prevent other provinces from selling electricity back to Sichuan in a pinch.

This summer’s record heatwave, which evaporated reservoirs and pushed up electricity demand as households cranked up air conditioners, exposed the vulnerability of this arrangement. The power crunch, which has started to ease, disrupted the local operations of $26 billion Tianqi Lithium (002466.SZ), Apple (AAPL.O) supplier Foxconn (2317.TW), Toyota Motor (7203.T) and others. Officials in Shanghai, home to factories for Tesla (TSLA.O) and other automakers, even lobbied for special access, according to Bloomberg.

Chinese energy officials have voted to speed up nuclear development, among other things. A much-cited 2018 study by researchers affiliated with the state economic planning agency forecast that for the country to meet its net-zero carbon emissions goal by 2050, atomic energy capacity will need to reach 554 gigawatts. That’s 28% of the modeled energy mix, versus 21% and 17% for wind and solar respectively.

That would be a boon for companies like CGN Power (003816.SZ) and China National Nuclear Power (601985.SS), but there’s a hitch. There is widespread public opposition to more plants following Japan’s 2011 Fukushima accident; authorities have unofficially banned building reactors inland. Last year, the country’s 54 coastal reactors generated just 52 GW, or 5% of the total.

Officials are setting their sights on 70 GW by 2025. Anything more ambitious may be a stretch: the 2018 study, for instance, estimated over half of capacity would have to come from installations in the hinterlands. Unfortunately many of these regions are under mounting water stress, and some traditional reactor designs need 1 billion gallons of water per day. Monday’s 6.8 magnitude earthquake in Sichuan, the strongest in nearly a decade, highlights another huge risk.

A more realistic way to boost clean energy without slipping back into fossil fuels is to expand wind and solar capacity now, while pushing harder to roll out safer and less water-intensive nuclear technologies. In December, CNNC launched an experimental “pebble bed” reactor that uses gas instead of water; the government recently tested a thorium reactor that uses molten salt for coolant. It’s still early days, but the payoff could be immense.

(The author is a Reuters Breakingviews columnist. The opinions expressed are her own.)

An electricity shortage in China’s southwestern province of Sichuan has started to ease, according to state media on Aug. 28. Power for ordinary industrial and commercial users has been restored while that for large industrial users will be gradually restored, except for highly energy-intensive industries.

The National Energy Administration has started to adjust its power development plans for 2021-2025 in response, Reuters reported. The agency said it will accelerate the construction of new hydropower stations as well as the approval of nuclear plants and power transmission projects.

Opinions expressed are those of the author. They do not reflect the views of Reuters News, which, under the Trust Principles, is committed to integrity, independence, and freedom from bias.