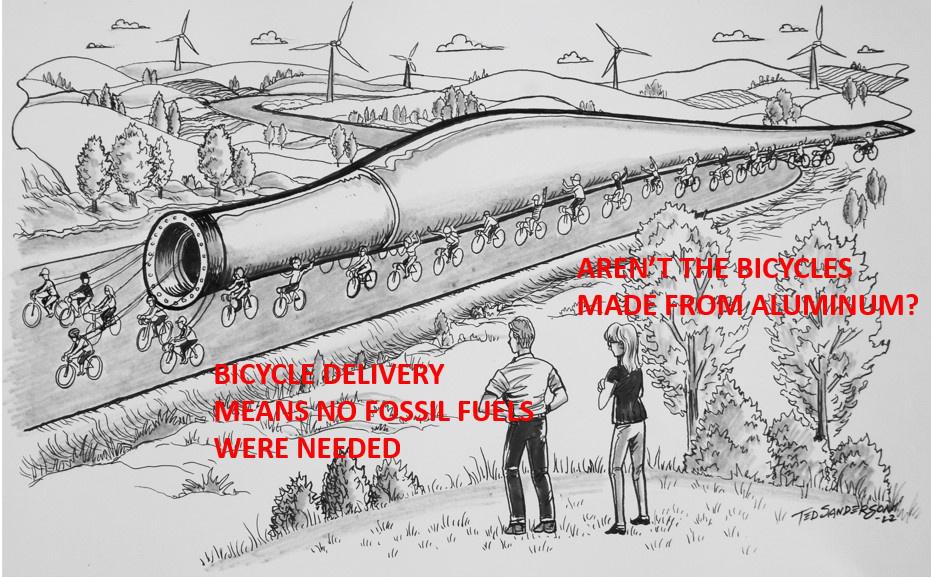 The author with Ted Sanderson

Nuclear power is definitely getting its day in the sun, partly from long-term nuclear power advocates (duh), but also from those worried about climate change who were not particularly pro-nuclear in earlier times. This has been exacerbated by the bizarre spectacle of countries closing nuclear power plants while still relying on coal—or even increasing coal consumption while extolling their Green credentials. (I’m looking at you, Germany.)

This has brought a certain amount of pushback, most of which has been little better informed than the 1970s anti-nuclear movement. Although I have remarked in the past on the pop singer Jackson Browne’s fear of giant mutant sponges, the fact is that many people in those days opposed nuclear power on the grounds that no radiation exposure level was acceptable. Ignoring the fact that natural background radiation everyone is exposed to far outweighs what nuclear power plants emit.

That argument has certainly been more mutated lately but has hardly disappeared. Instead, the primary focus of opponents has been on cost overruns at a handful of new plants in Finland, England and the US Those are very salient points, but why the cost of initial plants would be considered indicative of the long-term costs, but only for nuclear power and carbon sequestration, not for, say, concentrated solar power, eludes me.

Public persona Christie Brinkley’s recent letter to the New York TimesNYT is deeply flawed. I don’t know the lady myself and do not object to her using her status to bring attention to a public policy question but wish she would be better informed. Entertainers and celebrities have long used their star power to bring attention to public issues. My favorite was Jane Fonda’s testimony to Congress about a bill to aid farmers during a commodity bust. She said she cared because her father played a farmer in “Grapes of Wrath,” but acknowledged she simply wanted to use her celebrity to help people. To my knowledge, she didn’t spout any nonsense about us were running out of land, or that fertilizers were unnatural, etc.

But Ms. Brinkley’s arguments are largely in error. Most amazingly, she says that “Nuclear power is not clean, green or emission-free like wind or solar….” And mentions the energy needed to process uranium as fuel. Perhaps she doesn’t realize that solar panels and wind turbines require large amounts of minerals that must be mined and processed, and then manufactured into components that must be delivered, installed and maintained. There may be lower emissions from wind and solar plants, but they are not emission-free and they devour land faster than a Russian czar.

She also makes the claim that “Diablo Canyon has produced an estimated eight times the radioactivity released at Chernobyl” which is misleading. She’s apparently citing a study that refers to the nuclear waste at Diablo Canyon, not released radiation. This is similar to comparing the amount of mercury used to make CFL lightbulbs to the mercury released in the infamous Minamata disaster. The comparison of stored material with a disaster that released radiation into the environment is not valid in any way.

Which highlights the standard claim that because nuclear waste is so toxic and long-lived, nuclear power should be rejected. Again, mercury being an element, it lasts forever, yet no one suggested CFLs should be opposed for that reason. The industry has been storing waste for decades and only when a one-in-a-thousand -ear earthquake struck Japan was there any radiation release from stored material, and that was due to the tsunami, not the earthquake. Certainly, Diablo Canyon might be similarly vulnerable, but if Fukushima’s backup generators had been elevated instead of in the basement, the radiation leakage would have been avoided.

She also believes that it would be easy to replace the power output from Diablo Canyon with renewables, since “33.1 percent already comes from safe renewable sources,” which doesn’t seem to agree with official sources, that put hydroelectric power at 27.4 TWHs ( 10.5% of power) and other renewable at 9.8 Twh (3.8%). Presumably, she isn’t suggesting more hydro power (environmentally unsound, many argue), and Diablo Canyon produced twice as much power as other renewables did.

And yes, California’s renewable power production has been increasing rapidly, more than doubling in the last decade. However, it would have to be tripled to replace Diablo Canyon and doing that in, say, five years would mean growth would have to go from 9% annually to 25%. This would require huge amounts of money, land and almost certainly imports from China of materials, components, and panels.

Retiring Diablo Canyon in the next few years would not be apocalyptic, but it would be very difficult and expensive, something Californians might not appreciate given the already high cost of living. And doing it because of exaggerated fears seems particularly foolish. Personally, I would love to see Diablo Canyon phased out and replaced with more modern reactors, such as small modular reactors (SMRs) being developed in a number of places, which promise even safer and cheaper power. But maybe that’s just me.