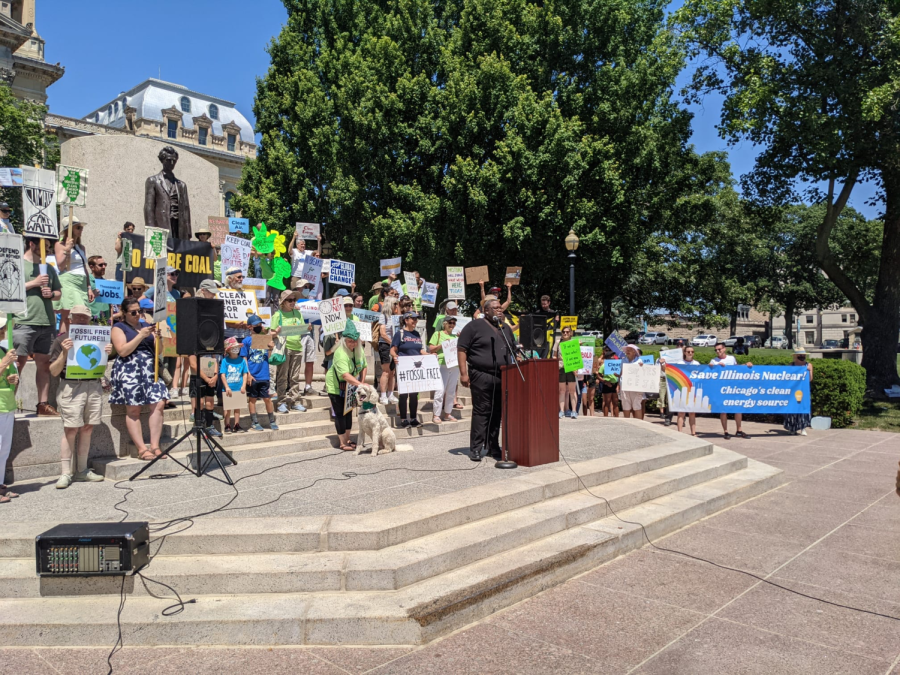 Climate groups, researchers, and students in Illinois are at the forefront of a clean energy movement.

They are pushing for low carbon energy sources and energy efficiency to slow the effects of climate change – and they all approach the problem from different angles.

The power and transportation sectors accounted for 29% and 25% of greenhouse gas emissions in the United States, respectively, in 2019. With wealthy countries collectively emitting billions of tons of carbon dioxide into the air each year through power generation and transit, many environmental scientists predict that climate-related problems will only get worse.

Here’s a look at the state’s unfolding nuclear energy debate, the search for greener modes of transport, and how NU students are part of the picture.

Madi Czerwinski, founder and chief executive of Campaign for a Green Nuclear Deal, said closing the power plants would lead to an increase in emissions.

According to Lewis’ book How Safe is Safe Enough?

Nuclear reactors around the world use several redundant safety measures and are designed to automatically shut down and cool the reactor if something goes wrong. In addition, the Nuclear Regulatory Commission regularly reviews facilities to ensure that all safety protocols and standards are being followed. Therefore, experts consider nuclear power to be safe.

According to Alan Medsker, a technical solutions engineer at Unify, an Illinois resident and a long-time nuclear proponent, nuclear has had a tough time in deregulated markets. One reason for this could be that natural gas is cheaper and the environmental benefits of nuclear energy are not as widespread as other green energy sources, he said.

“The electricity markets don’t value what we as a society say we value,” Medsker said. “People with solar, wind or gas systems end up getting the same amount for their electricity, even though nuclear (and water) power is the only one that is clean and reliable.”

Without subsidies, power plant owners like Byron and Dresden said they would invest elsewhere and shut down the plants.

McCormick Junior Bill Yen, co-president of Engineers for a Sustainable World at Northwestern, said he sees nuclear power as a theoretical solution to shift dependence on fossil fuels and high emissions that contribute to climate change. But he’s not sure how much traction it can gain in the long run.

Czerwinski worked with Medsker and local grassroots activists in Illinois on the campaign to save Byron and Dresden for more than 13 months.

After extensive work and lobbying, an energy bill with subsidies for the facility was passed by the Illinois Legislature on September 12th, the day Byron was due to close.

Czerwinski said the process felt like a “roller coaster” between gloomy moments and sparks of trust.

“I had a small pit in my stomach pretty quickly afterwards,” said Czerwinski. “This has been a 13 month struggle in a state where 90% of its clean energy comes from nuclear power (and) half of its electricity from nuclear power… It should have been a slam dunk and it was so difficult. What hope do we have for the construction of new nuclear power plants? “

Traffic, the second largest source of greenhouse gas emissions in the US, offers opportunities for more sustainability and fewer emissions.

Citizens’ Greener Evanston, a local nonprofit founded in 2008, promotes environmentally friendly transportation. Specifically, CGE is promoting the use of public transportation and working with Evanston to install the electric vehicle infrastructure, said Lauren Marquez-Viso, vice president of the nonprofit. The organization is also looking into electrifying the local school districts’ bus fleets.

“Climate change is not something that will happen in the future. It’s already there, ”said Horton. “If we don’t change the amount of CO2 we put into the atmosphere in the future, it will only get worse. The climate overlaps with all aspects of life. Not just human life, but all of life. “

Even if the effects on national or national energy policy may seem inaccessible to the common man, many NU students find ways to make a difference through energy efficiency and sustainability research.

Weinberg Senior Grace Hauser, an undergraduate researcher at Horton’s CCRG, is investigating the potential impact of converting all lightbulbs in the US to the up to 90% more efficient LED lamps. This change could significantly reduce emissions and, as a result, improve air quality and public health in communities near coal-fired power plants.

Hauser said she believes in lowering electricity consumption through energy efficiency while looking for clean energy.

“I see them as parallel goals, because ideally we could shut down and replace coal-fired power plants immediately,” said Hauser. “I think the fact is that clean energy has been politicized, as has nuclear power – it’s extremely difficult to build a new nuclear power plant.”

Yen is leading a team within ESW to develop an auto-aquaponics system, a sustainable farming system that uses up to 90% less water than traditional farming. The system breeds fish and plants without human labor and reduces emissions because it grows more food in less space and recycles nutrients.
All the activists and educators surveyed agreed that reducing emissions is essential to slow down and minimize the damage caused by climate change.