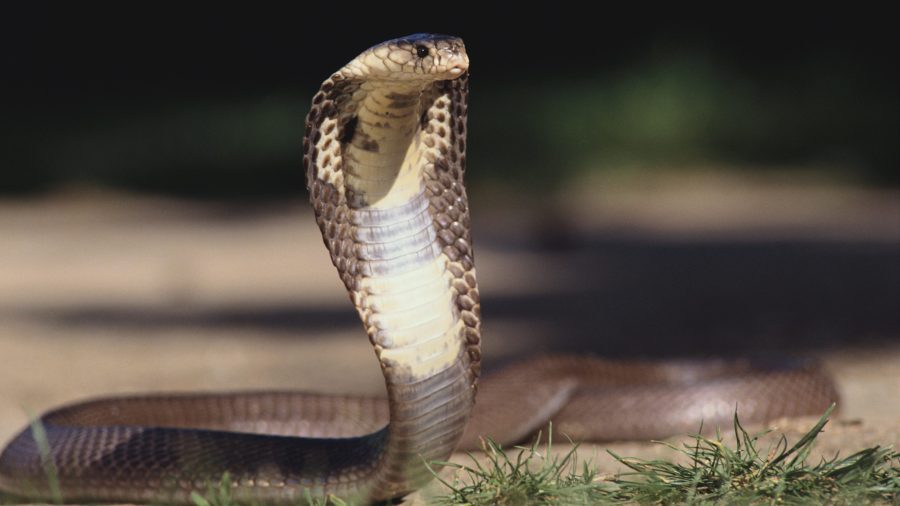 Cobra venom in the water supply? We asked experts about the viral conspiracy theory

This is an archived article and the information in the article may be outdated. Please look at the time stamp on the story to see when it was last updated.

GREENSBORO, NC (WGHP) – We get a lot of calls to the newsroom alerting us to public safety concerns. Today’s important (and unsubstantiated) tip: There is snake venom in our drinking water.

This is concerning. There has been no public health alert distributed about this. So we did what anyone would do in such a case, we asked the Google machine about the providence of this warning and what we, as citizens, need to know about it.

Google returned 24.2 million results to the terms “snake venom in water,” but almost all of them dealt with what you need to know about snake venom and its dangers and effects. There were entries about water moccasins – that’s certainly logical – and FAQs from public health officials.

But there were only three true articles about how snake venom might be in our water supply. The introduction came from a piece from The Daily Beast political reporter Will Sommer called “Hucksters profit off nutty ‘venom in the water’ theory.”

Are people benefiting from a public health threat? That’s a double-edged concern. Who would do such a thing?

Yes, that’s the literal sentence written by Sommer. If you believe this, you didn’t even need to be vaccinated to be subjected to “Satanic DNA.” We don’t know if that’s part of the microchip thing. Apparently, all this evolved from a TV show called “The Blacklist,” in which a character played by James Spader suspects he has been poisoned by snake venom in his drink.

Ardis told Peters, “They are using the water systems because they can target specific demographics.” Apparently, this video has been seen by millions, and a man in Pennsylvania named Phil Godlewski started to market water filtration systems that he said would help remove that cobra venom from your water.

Godlewski said in a video, Sommer reported, that he “strongly advised that you stop drinking any water that is tap water, or even bottled water.” He said common filters you might buy for your home couldn’t be trusted because at least one of the manufacturers was owned by “the cabal.”

So Godlewski suggested you buy his filters, which, Sommer wrote, some customers complained about because of the price. So he raised $40,000 that he said would help the folks on fixed income buy his filters. Summer has all the details.

Now this idea that there is snake venom in the COVID-19 vaccines has been around. The hoax claims that it’s in remdesivir, the COVID-19 treatment drug, and, yes, the water supply.

Factcheck.org felt the need in an article posted Wednesday to say that “COVID-19 is caused by a virus, not snake venom.” That analysis even explained how the Catholic church was said to be complicit. We thought snake-handling religions were more protestant. 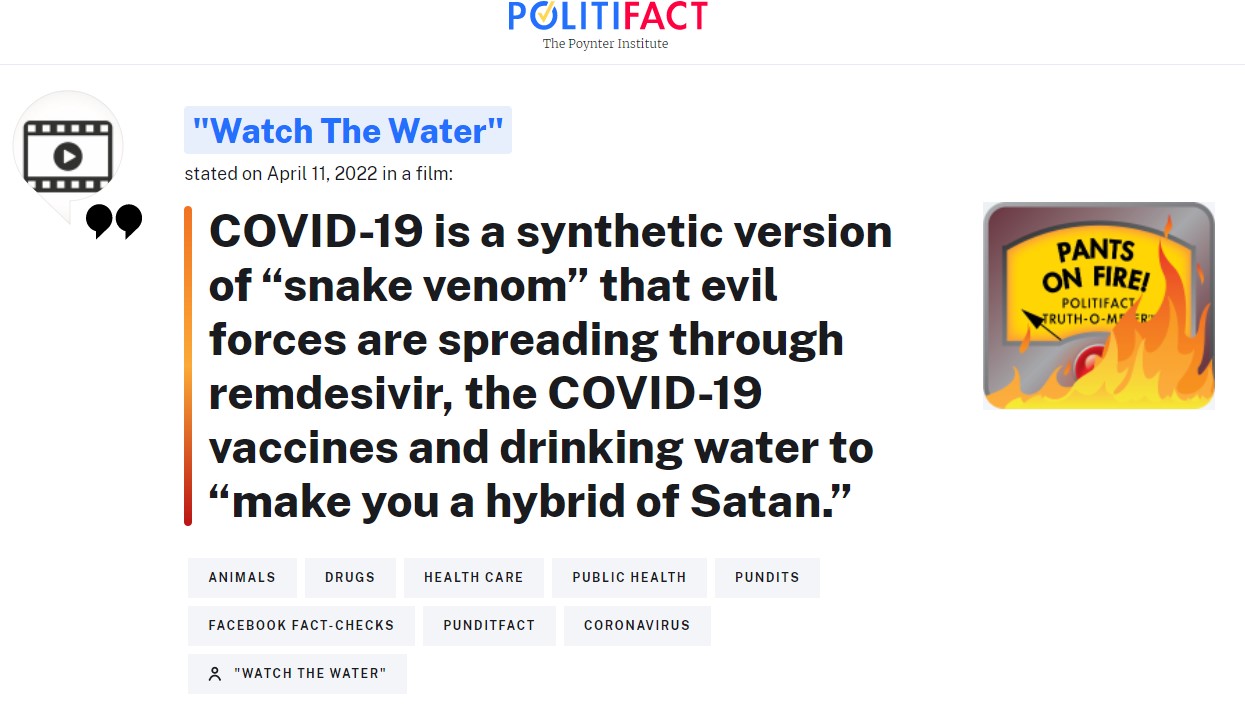 All of this drew the attention of the folks at Politifact, who verify claims and get to the bottom of what is said by almost everyone. Politifact ruled this theory as “Pants On Fire,” as in the stuff of “liar, liar.” Those folks don’t rate untruths on a lower scale than that.

Still, Politifact analyzed the source and debunked the theory along medical and scientific lines, attacking Ardis’s documentary for its lack of truthfulness and its feeding from QANON-distributed outrageous conspiracies.

Politifact says that Ardis “falsely claimed that the monoclonal antibodies are identical to the anti-venoms used to disable the toxins from a snake bite. He then claimed without evidence that if a public health agency advises against a treatment, then that means the treatment actually works.”

Politifact also shot down Ardis’ claim that there are 19 toxins in cobra venom and that number related to the term “COVID-19,” which we already knew was because this coronavirus was identified in 2019.

He also claimed “that the phrase ‘coronavirus pandemic’ can translate in Latin to ‘the pope’s venom pandemic’ or ‘king cobra venom pandemic.’” Politifact cited an expert from the world’s largest dictionary of Latin to show these translations were “completely false .”

What about North Carolina?

Still, we live in North Carolina, and there are six species of venomous snakes that are indigenous to our lives. None of them, thank you, is a type of cobra. So does that give us protection? Is our water supply mostly pure?

We reached out to the folks who should know about these things. First was the North Carolina Department of Health and Human Services, whose spokesperson said our questions had sent her to social media where she found a lot of comments about these conspiracies that astounded (our word) her. That connection to “The Black List” was telling.

But she also said no one has asked the state’s health department about the validity of these concerns.

Then we also sent an email to the man who tests the water in Greensboro – which delivers 33 million gallons of water per day to customers – and filters out all sorts of poisons that are made and distributed by man without the help of the glands of a snake. He is usually clear about the present dangers in the water. Mike Borchers of Greensboro Water Resources said he has had no calls directly to him about snake venom possibly being in the water supply.

“I would respond first by stating it is unfounded and untrue,” he said in an email. “The only chemicals we add to treat the city’s drinking water are: Ferric Sulfate (remove solids), Sodium Hypochlorite (disinfectant), Ammonium Sulfate (disinfectant), Sodium Hydroxide or Calcium Carbonate (pH control), fluoride (prevent dental caries), and a phosphate-based corrosion inhibitor (to protect our distribution pipes). All of these chemicals are EPA and State approved for treating and distributing drinking water.”

He said his staffers “work 24 hours a day and perform more than 250,000 water quality tests annually to make sure the highest quality water is delivered to our customers.”

So we can boil down these questions about cobra venom in the water to this: We have a theory pulled together from a TV show, woven with threads of QAnon nonsense and presented as a pants-on-fire lie.