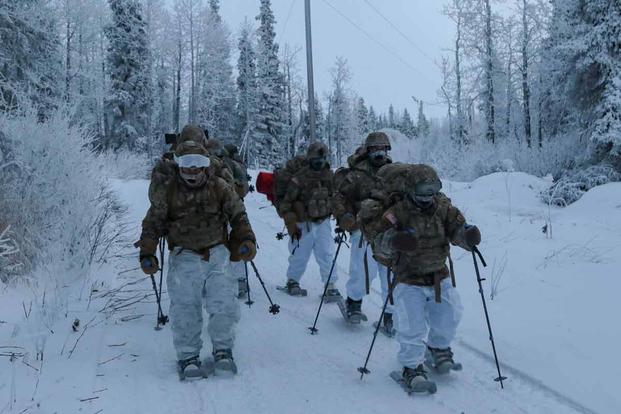 Soldiers in the frigid arctic and sailors aboard ships undergoing major construction could get extra pay as lawmakers look to respond through must-pass legislation to strings of suicides among service members in Alaska and on the USS George Washington.

Included in the version of the National Defense Authorization Act, or NDAA, advanced last week by the House Armed Services Committee are provisions to provide new $200 monthly stipends to sailors on ships undergoing nuclear refueling and complex overhauls and $300 monthly stipends to service members “assigned to perform cold weather operations.”

The grants are among several measures in the bill “confronting the epidemic of deaths by suicide of servicemembers in Alaska, on the USS George Washington, and across the military,” Rep. Jackie Speier, D-Calif., the chair of the House Armed Services Committee’s personnel subpanel, said in a statement last week.

Read Next: Veteran Captured While Fighting in Ukraine Speaks to Family

The measures come after Military.com revealed that the ship had suffered a string of undisclosed suicides that went back to at least last July. Rear Adm. John Meier, commander of Naval Air Force Atlantic, said the ship had suffered nine suicides in two years by April 2022, but Military.com’s reporting suggests that figure could be higher. Sailors told Military.com that the ship’s commanding officer told them that between July 2021 and April 2022, there were 10 suicides aboard the ship, although the publication has only been able to confirm six suicides of sailors assigned to the ship in the past year.

The ship has been undergoing a complex overhaul at Newport News shipyard in Virginia since 2017. The overhauls typically last four years and are usually done halfway through a carrier’s 50-year life to refuel the nuclear reactor and see to repairs and upgrades. The George Washington’s overhaul, though, has been extended twice and now isn’t expected to be done until early 2023.

Sailors who spoke to Military.com said living conditions aboard the shipyard-bound carrier had become unbearable and cited junior sailors having to live aboard the ship while it is still under construction, as well as parking issues that created extended commutes, as some of the chief culprits for the low morale aboard.

Rep. Elaine Luria, D-Va., who represents the area around Norfolk and the shipyard, told the press in May that until the news of the deaths was made public, the quality-of-life concerns aboard the ship did not appear to be on the Navy’s radar. Luria noted that Navy’s leaders “haven’t made any specific requests for that in this budget.”

In addition to the grants, the NDAA would require the Navy to offer paid moves to sailors assigned to ships undergoing complex overhaul and ensure that billets on such ships are at least 75% filled.

Meier told the press in May that while the ship had about 95% of the ship’s junior sailors aboard, it had only about 65% of its senior enlisted personnel.

The service would further have to study options for expanding housing and parking closer to the shipyards where the complex overhauls are done, as well as report to lawmakers on quality-of-life issues related to the George Washington.

The Navy confirmed that the crew living aboard the ship was given an option to move to on-base housing just over a week after news of the suicides was reported and days after the Navy’s top enlisted official, Master Chief Petty Officer of the Navy Russell Smith , told the crew was told the service is largely powerless to improve conditions.

“In early May, I met and spoke with junior enlisted sailors and Navy leadership aboard USS George Washington, and it was clear that the status quo aboard ships was undergoing [refueling and complex overhaul] is not acceptable,” Luria, who authored several of the George Washington-related amendments, said in a statement last week.

Meanwhile, in Alaska, at least 11 soldiers died by suicide last year, with another six deaths under investigation. That was up from seven soldier suicides in 2020 and eight in 2019.

Lawmakers and other leaders have in part blamed the socially isolating nature of work in a remote location such as Alaska, as well as a lack of resources for the arctic mission and long wait times for mental health appointments.

On top of the $300 “arctic pay” grants, the House NDAA seeks to alleviate some of the stressors of life in Alaska with pilot programs to allow car sharing services on Alaska bases and to provide grants to make up for the higher cost of internet there compared to the contiguous United States. The internet grants would start at $125 per month next year and could change in following years depending on cost differences between internet plans in Alaska and the continental US

The government could also pay for airfare for service members and dependents in Alaska who are not from the state to take at least one trip home per three-year tour under another NDAA provision.

The bill must still pass the full House and be reconciled with the Senate’s version of the NDAA before becoming law.

The version of the NDAA advanced this month by the Senate Armed Services Committee, of which a summary has been released but not the full text, includes measures to “expand access to mental health providers and support at remote military installations, incentivize behavioral health students to work in the military health care system upon graduation, and improve the living conditions of service members stationed in Alaska,” according to a news release from Sen. Dan Sullivan, R-Alaska.

© Copyright 2022 Military.com. All rights reserved. This material may not be published, broadcast, rewritten or redistributed.

The genomic basis of the plant island syndrome in Darwin’s giant daisies – Nature.com