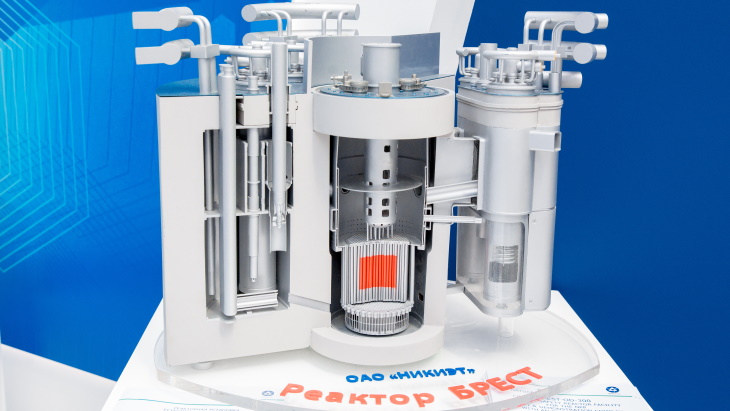 The Russian nuclear regulator Rostechnadzor has given the Siberian Chemical Combine a license to build the BREST-OD-300 reactor at its site in Seversk, Russia. It will be the world’s first experimental demonstration unit with a lead-cooled fast neutron reactor.

A section from the BREST OD 300 reactor (Image: Rosatom)

The building permit was signed yesterday by the chairman of Rostechnadzor, Alexey Aleshin.

During the safety review for the pilot demonstration unit, new federal regulations and rules were developed, taking into account the specifics of the project. These include regulations for the design and safe operation of reactors using lead as a coolant, as well as requirements to justify the strength of the reactor vessel, equipment and piping of such reactors. A total of 16 Rosatom standards have been approved and put into effect detailing the requirements and ensuring that all the features of the BREST-OD-300 power pack are taken into account.

The Siberian Chemical Combine is a subsidiary of TVEL, the subsidiary of the Russian state nuclear company Rosatom for the production of nuclear fuels.

“First of all, I would like to congratulate the entire industry on this important event, to which we have proceeded gradually and systematically,” said Vyacheslav Pershukov, Rosatom’s Special Representative for International and Scientific Projects. “Obtaining a license means that all of the questions asked by Rostechnadzor for the BREST power plant construction project have been answered. This in turn suggests that all key project results planned for 2021 will be implemented according to the comprehensive Russian technology transfer network program.”

BREST-OD-300 is part of Rosatom’s ‘Proryv’ or breakthrough project to enable a closed nuclear fuel cycle. The 300 MWe unit will be the main facility of the Pilot Demonstration Energy Complex (PDEC) currently under construction at the Siberian chemical plant site. In addition, PDEC will demonstrate a closed nuclear fuel cycle on site with a facility for the production / recovery of mixed uranium-plutonium nitride nuclear fuel and a processing facility for used fuels.

As part of a RUB 26.3 billion (USD 360 million) contract signed in December 2019, Titan-2 will build the reactor building, turbine hall and associated infrastructure for the power plant. Completion is planned for the end of 2026.