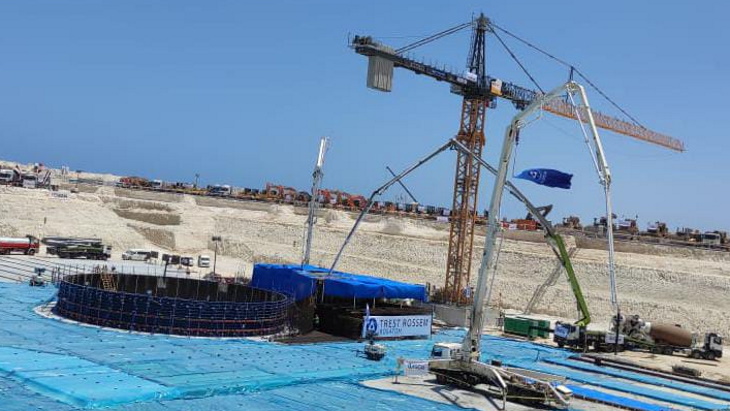 The first safety-related concrete has been poured for the nuclear island of unit 1 of the El Dabaa nuclear power plant in Egypt. It marks the official start of construction of the first of four Russian-supplied VVER-1200 reactors at the site on the country’s Mediterranean coast.

The first concrete is poured for unit 1 of the El Dabaa plant (Image: NPPA)

ENRRA issued a construction license for unit 1 of the plant on June 29, ahead of schedule, allowing concrete pouring for the first reactor to commence.

A ceremony was held on Wednesday to mark the pouring of the first concrete for El Dabaa 1. It was attended by, among others, Egyptian Minister of Electricity and Renewable Energy Mohamed Shaker, NPPA Chairman Amged El-Wakeel and Rosatom Director General Alexey Likhachov.

“The construction launch at El-Dabaa NPP unit 1 means that Egypt has joined the nuclear club,” Likhachov said. “Construction of the nuclear power plant will allow Egypt to reach a new level of technology, industry and education development. The plant will be the largest project of the Russian-Egyptian cooperation since the Aswan High Dam. Having its own nuclear energy industry has been a dream for the Egyptian people for more than half-a-century, and it is a great honor for Rosatom to make this dream come true.”

Mohamed Shaker added: “The ceremony commemorating the pouring of the first concrete for unit 1 is a great delight for us. The commencement of full-scale construction of unit 1 is a historic event for Egypt. The political leadership and the Egyptian-Russian cooperation contributed to the implementation of this ambitious project despite the challenges presented by the COVID-19 pandemic, which did not have a negative impact on the project.”

The contracts stipulated that Rosatom will not only build the plant, but will also supply Russian nuclear fuel for its entire life cycle. They will also assist Egyptian partners in training personnel and plant maintenance for the first 10 years of its operation. Rosatom is also contracted to build a special storage facility and supply containers for storing used nuclear fuel.