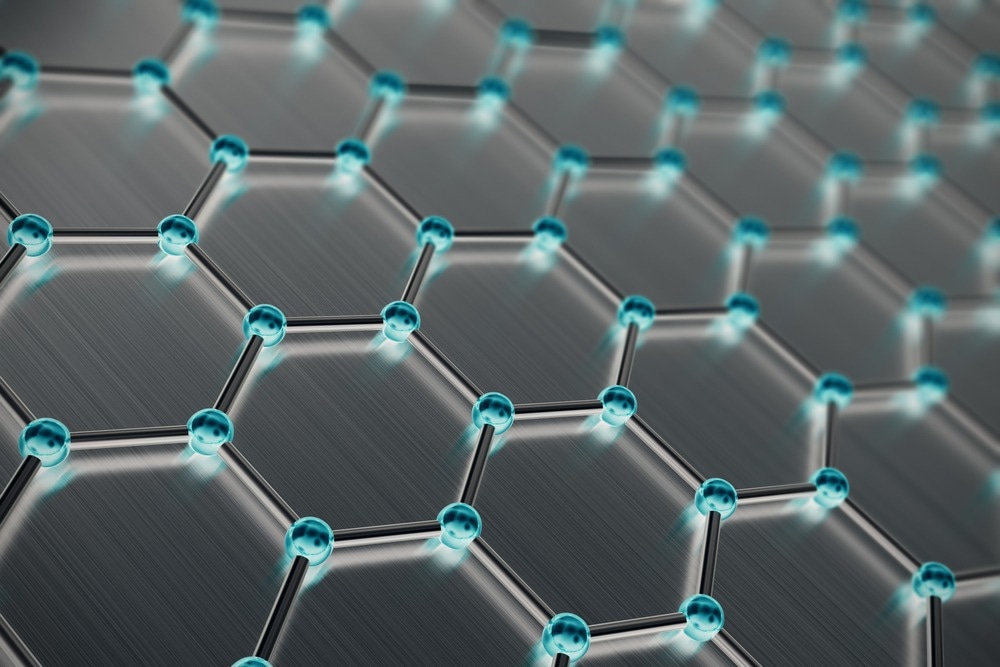 A paper recently published in the journal Nuclear Engineering and Technology demonstrated the feasibility of using graphene to control hydrogen isotopes, specifically tritium.

Tritium, a fast-decaying radioelement of hydrogen with one proton and two neutrons, is produced by nuclear reactors and by the interaction between cosmic rays and atmospheric particles. Tritium beta can diffuse through several materials, has 12.35 years half-life, and decays into helium-3.

Tritium does not pose any significant risk to health as beta particles cannot infiltrate the epidermis when they are outside the body. However, tritium can replace hydrogen in the biological molecules before emitting radiation or decaying after it is absorbed into the body, leading to several adverse health effects such as carcinogenesis.

Several next-generation fusion reactors are fueled by deuterium-tritium (DT) reactions due to their high reactivity and large cross-section. Although deuterium is naturally abundant, the supply of tritium is limited. Thus, tritium reactors are designed to produce their tritium in a lithium blanket.

Tritium control methods are required in fuel reactors to maintain their efficiency and prevent negative health effects as tritium can escape from the reactor systems since it can diffuse through several materials, including metals.

Graphene has gained considerable attention as a suitable material for tritium control due to its exceptional thermal conductivity, strength, and large surface area. Several studies have demonstrated the feasibility of using graphene to control hydrogen isotopes.

In this study, researchers used molecular dynamics (MD) simulations to evaluate the possibility of using graphene to control hydrogen isotopes. Researchers investigated the penetration, reflection, and adsorption of hydrogen isotopes on graphene during the collision of tritium atoms with various graphene structures using a large-scale atomic/molecular massively parallel simulator (LAMMPS).

The second-generation reactive empirical bond order (REBO) potential was employed throughout all simulations as the REBO model can accurately predict the covalent bond potential energy and simulate the hydrogen-carbon interactions and their bond formations.

The z coordinates of the isotopes were set to 10 nm when the graphene layer was located at z=0. The hydrogen isotopes traveled and collided with the graphene layer/layers at a constant velocity. Simulation structures were equilibrated for 30 ps with one fs timestep.

The sizes of the simulation box in the y and x directions were determined carefully to ensure that the system can mimic an infinite-length graphene structure through the periodic boundary conditions. However, the atomic vibration wavelengths in graphene were still limited by the simulation structure size.

The impact of the number of graphene layers on hydrogen isotope reflection, adsorption, and penetration was also investigated using the simulation structure. Graphene layers were set parallel to the yx plane at 0.335 nm intervals, and the bottom-most graphene layer was located at z=0.

Isotopic effects were investigated using the same simulation procedure by varying the hydrogen isotope masses. Additionally, the effect of incident angle was examined by performing another simulation where the tritium atoms traveled to the graphene floor with 30 and 60o incident angles.

The adsorption rates of tritium atoms impacting graphene at greater incident angles were lower than the incident energy normal component was quickly decreased with the increasing incident angle.

This study’s findings demonstrated the effectiveness of graphene as an efficient material for controlling hydrogen isotopes, specifically tritium. Moreover, the findings can be utilized to create novel nanomaterials for tritium control. Graphene can be used in several applications for hydrogen isotope control.

Disclaimer: The views expressed here are those of the author expressed in their private capacity and do not necessarily represent the views of AZoM.com Limited T/A AZoNetwork the owner and operator of this website. This disclaimer forms part of the terms and conditions of use of this website.