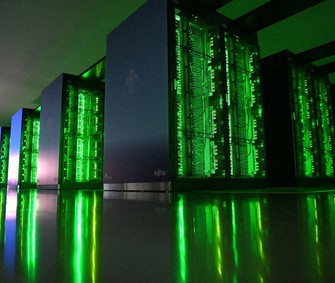 The RIKEN Research Institute’s Fugaku supercomputer, said to be the fastest in the world, generates an enormous amount of heat as its central processing units (CPUs) burn through calculations. While the supercomputer is expected to play a valuable role in cutting-edge research, a look behind its dazzling performance reveals a battle against the heat.

The building that houses Fugaku is in Kobe’s Chuo district, and the steam generated during the cooling process gushes from a cooling tower on the roof – almost like a power station. In fact, according to Riken, there is so much steam that there have even been several cases since last spring where people staying in a nearby hotel mistook it for smoke and alerted the police and fire department.

Toshiyuki Tsukamoto, Deputy Head of Department at the RIKEN Center of Computational Science, explained: “The heat generation density corresponds to that of a nuclear reactor. Depending on the type of calculation, the power consumption varies considerably and the heat value changes in tandem. Only supercomputers require measures to counter such massive changes in the Heat generation. ”

Fugaku, which was built as the successor to the supercomputer “K”, which went offline in August 2019, is scheduled to go into full operation in March of this year. In tests last year, it was used to simulate the spread of droplets when formulating measures against the coronavirus. It has taken first place in four categories in a biannual world ranking of supercomputer performance twice in a row.

In the computer room on the third floor of the building where Fugaku is housed, there are over 160,000 central units in 432 racks that generate heat during operation. The heat density can rise to over 100 kilowatts per square meter. This is like running 100 electric domestic heaters in an area of ​​1 square meter.

To ensure that the CPUs can work efficiently, they must be kept below 30 degrees Celsius. Without cooling, however, their temperature would rise above 100 ° C within seconds. To prevent this from happening, the supercomputer is equipped with a large water-based liquid cooling unit. The cooling system has primary and secondary branch pipes through which water flows to extract heat from the CPUs.

The most difficult task, according to Tsukamoto, was dealing with temperature fluctuations. Different types of calculations lead to detailed changes in the operation of the CPUs, which leads to significant changes in power consumption and the amount of heat generated. This can lead to heat shocks in just 1/1000 of a second.

“When the temperature suddenly rises and falls in a short period of time, the question of how to continuously cool the water becomes important. We haven’t had any cases in the past to relate to, and we thought about how existing technologies put together said Tsukamoto.

Tsukamoto was involved in Fugaku’s operation after working with K. “It’s only natural for it to work properly,” he said. “I do what is natural as if it were only natural. This is a source of pride for those who work behind the scenes and I think it’s also something that I am confident about.”

It is evident that such efforts to advance sophisticated cooling technology have helped bring Fugaku to the forefront of supercomputing.

The blackouts have only just begun | TheHill – The Hill