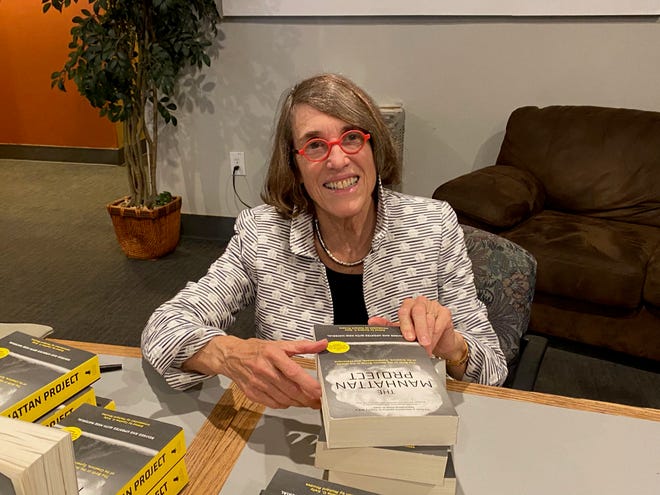 Carolyn Krause agreed to help document the 80th Anniversary of Oak Ridge event on Sept. 10, at the Historic Grove Theater. She has already produced a news story for The Oak Ridger on the event, but has included more details here in “Historically Speaking” for you readers who may have missed the great event.

Oak Ridge Heritage & Preservation Association is to be commended for taking the lead on this anniversary celebration and in cooperation with the “Scarboro-85” recognition of the desegregation of Oak Ridge High School and Robertsville Junior High School in September 1955. The entire weekend was a huge success.

On Sept. 10, Cynthia C. Kelly, president of the Atomic Heritage Foundation, was the keynote speaker for the celebration of the 80th anniversary of the birth of the secret city later named Oak Ridge. The event was hosted by the Oak Ridge Heritage and Preservation Association. A front-page article on her remarks was published in the Sept. 19 edition of The Oak Ridger.

Eighty years earlier, on Sept. 19, 1942, General Leslie Groves, officer in the Army Corps of Engineers, selected this area as the site for the World War II top-secret Manhattan Project, displacing 3,000 residents. Below is Carolyn Krause’s summary of Kelly’s remarks that were not reflected in the Sept. 19 article.

“It is mind boggling that this sleepy farming community was transformed into a powerhouse of innovation and technology,” Kelly told her audience at the Historic Grove Theater. “How did this happen? It almost didn’t. There were many times when people were about to give up and it looked hopeless.”

Kelly spoke about American bureaucratic fits and starts that made producing an atomic bomb before the German Nazis “a race against time.” Eugene Wigner, later research director at the predecessor of Oak Ridge National Laboratory, compared the federal government’s progress in launching an atomic bomb development project to “swimming in syrup.”

For example, after the publication of the discovery of nuclear fission in February 1939 by the Jewish physicist Lise Meitner and her nephew Otto Frisch, Vannevar Bush, the science advisor to President Franklin D. Roosevelt, said that the idea of ​​an “atomic bomb” what crazy.

The Hungarian immigrant, Leo Szilard, wrote a letter to FDR that was translated into English by Wigner and signed by Albert Einstein in August 1939. It warned the president that the German enemy might beat the US to making an atomic bomb for wartime use. But the president did not receive the letter for two months. It was delivered to FDR by his trusted advisor and friend, economist Alexander Sachs, who could not get an appointment until October.

“Sachs told the president that this energy is so enormous that it could be put to great use and it could be put to hugely destructive purposes,” Kelly said. FDR said something like, “What you are after is that the Nazis don’t blow us up!” FDR told his military adviser General Edwin M. Watson, “This requires action.” The action FDR required would evolve into the Manhattan Project, which the president did not officially approve until January 1942. That was about a month after the United States entered World War II against Germany, Japan and their allies following the Japanese bombing of Pearl Harbor in Hawaii on Dec 7, 1941.

Great Britain, along with France, Germany, Italy and the United States, had started atomic bomb research programs shortly after the discovery of fission. In March 1940, the British program issued a top-secret memorandum coauthored by Otto Frisch and Rudolf Peierls, who had been recruited in 1937 by Mark Oliphant, the newly appointed Australian professor of physics at the University of Birmingham, for a new chair there in applied mathematics. The short paper was the first to maintain that an atomic bomb could be built from a small amount of fissile uranium-235. Previously, some scientists assumed that many tons of uranium would be required for the bomb.

The top-secret report was delivered to Lyman Briggs, director of the Bureau of National Standards, who was put in charge of the Uranium Committee FDR had created. The executive committee members included Nobel laureates Arthur Compton, head of the plutonium project at the University of Chicago, and Ernest Lawrence, who headed the California group developing the electromagnetic method of separating uranium-235, which is capable of fission, from the much more abundant uranium-238 (deployed at the Oak Ridge Y-12 plant). According to Kelly, Briggs, who was not a scientist and seemed overly cautious, locked the report in a safe and didn’t tell anybody about it.

So, she added, Oliphant visited Briggs, found out he hadn’t shared the report with the Uranium Committee and then flew to California to talk with Lawrence about Great Britain’s interest in partnering with the United States on a joint nuclear program. Lawrence agreed, met with Compton, and the two men persuaded Bush to write a memo in October 1941 to FDR suggesting that the War Department be put in charge of an atomic bomb development project. By that time Great Britain had been so heavily bombed by the Germans that the country counted on the Americans to focus on the design of and fuel production for the bomb.

In January 1942 the Army Corps of Engineers was put in charge of the Manhattan Project, which Kelly said got his name from the location of the office of the man selected to head the project – Col. James C. Marshall. He worked from his office at 270 Broadway as a district engineer of the Manhattan Engineer District.

“His orders were to build four experimental plants for a total of $90 million, which he didn’t think made any sense,” Kelly said. “So, he delayed the purchase of land in Oak Ridge” for the nuclear fuel production plants. “He was good at recruiting top talent like Col. Kenneth Nichols, who was based in Oak Ridge during the war and was the deputy to General Groves.

“Marshall’s cautious approach was too much for Bush, who worried that the US program was two years behind that of Germany. He wanted someone who will take risks and move the project forward rapidly. So, he hired Gen. Leslie Groves, a dynamo,” who had headed the construction of the Pentagon and various military facilities. Nichols replaced Marshall in August 1943.

Kelly said that Groves was most decisive.

“Groves would make a decision in an hour and then go play tennis. He wasn’t afraid to make a controversial decision. Groves chose J. Robert Oppenheimer as scientific director of the Manhattan Project and of the Los Alamos laboratory,” where the two atomic bombs were designed.

“It was a controversial decision because Oppenheimer had not won a Nobel Prize, had no administrative experience except for supervising postdocs and had past associations with Communist groups. Groves ignored criticisms that Oppenheimer was a security risk.

“He saw Oppenheimer as brilliant, hard-driving, decisive and extremely ambitious just like himself. So, the two of them were a wonderful partnership. Each saw in the other way for them to fulfill their own ambition. They got along really well because they knew their success depended on the other.”

The Manhattan Project met its goal. It produced two atomic bombs that were dropped on Japan, ending World War II by Sept. 2, 1945.

Kelly briefly talked about Alvin Weinberg, who helped design the Graphite Reactor in Oak Ridge (the world’s second reactor) and who became director of Oak Ridge National Laboratory from 1955 to 1973. Weinberg had worked in Chicago in December 1942 when Nobelist Enrico Fermi and his colleagues built a lattice of blocks of graphite interspersed with chunks of natural uranium and used this “pile” to demonstrate the world’s first controlled and sustained nuclear chain reaction.

Kelly relayed Weinberg’s story that when the first reactor in Chicago went critical, the participants celebrated by drinking wine, but when a new reactor goes critical at ORNL, she said Weinberg proclaimed, “In Tennessee we celebrate by drinking Jack Daniels whiskey.”

Thanks to Weinberg’s influence, she explained, Capt. Hyman Rickover decided to use the Oak Ridge nuclear physicist’s pressurized-water reactor (PWR) concept for the first nuclear submarine (the Nautilus, launched in 1954). Rickover wanted the second PWR to be used for an aircraft carrier. President Eisenhower vetoed the proposal because in a speech to the United Nations he had committed the world to using atomic energy for peaceful purposes, not just for war. So, the second reactor became the heart of the world’s first civilian nuclear power plant that started up in 1957 in Shippingport, Pennsylvania. Today, almost 70% of the world’s nuclear power plants have PWRs.

The Nuclear Navy and nuclear power plants were two of many innovations that came out of Oak Ridge during the Manhattan Project. Even urban planning here was innovative, Kelly said, noting that Oak Ridge houses “were built in neighborhoods so that residents could walk to a grocery store or a school. Between the neighborhoods are green belts.” She stated that Oak Ridge had an impact on American urban design and planning for the next decade, inspiring the Levittowns and the new planned towns in Reston, Virginia and Columbia, Maryland.

“Oak Ridge has made its stamp on the world in many different ways,” Kelly said, noting that its researchers contributed to the 5,600 inventions and 2,100 patent applications that resulted from the Manhattan Project.

She quoted Susan Hockfield, former president of MIT, who said, “The American innovation system is a direct descendant of the Manhattan Project. There was so much innovation and collaboration across disciplines that were unprecedented. It changed the way science was done.”

Thanks Carolyn, for helping to document the 80th Anniversary of Oak Ridge event. I am pleased to serve on Cindy Kelly’s Atomic Heritage Foundation board of directors, along with John Wagoner of Oak Ridge and Denise Kiernan who wrote the book, “The Girls of Atomic City.” Stan Norris and Richard Rhodes are also board members.

Cindy has worked for years on a national level supporting the history of the Manhattan Project. She was instrumental in helping to create the Manhattan Project National Historical Park and we both were privileged to serve on the Scholar’s Roundtable to determine the primary focus areas for the park. I was also asked to testify in Congress regarding the creation of the park.

It was a pleasure to introduce Cindy that evening and I have enjoyed working with her for the past several years. Much has been accomplished at the national level because of her untiring efforts.