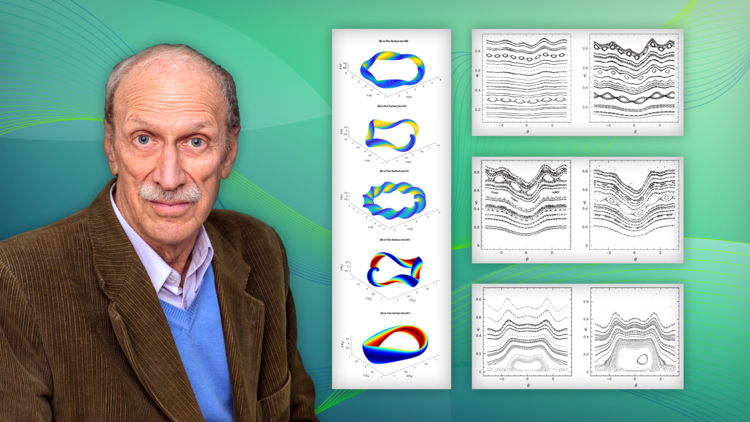 Investigation of a possibly critical issue with twisty magnetic stellarators, promising candidates to serve as models for a US fusion pilot plant, has clarified the potential impact of a largely overlooked concern. The finding at the US Department of Energy’s (DOE) Princeton Plasma Physics Laboratory (PPPL) demonstrates how periodic changes in the strength and shape of stellarator magnetic fields can, under certain theoretical conditions, facilitate the rapid loss of confinement of high-energy plasma particles that fuel fusion reactions.

“If you want to do nuclear fusion you must have high energy,” said PPPL senior physicist Roscoe White, lead author of a Physics of Plasmas paper that editors have selected as a “scilight,” or science highlight.

His paper identifies a new type of energetic particle loss, said Felix Parra Diaz, head of the Theory Department at PPPL. “Studies have so far focused on controlling other types of energetic losses that are dominant, and we are now trying to reduce energetic particle losses even more,” Parra Diaz said. “The paper on which these findings are based identifies a mechanism that we need to include when designing the optimal shape of stellarator magnetic fields.

“While this mechanism is included in our more detailed analyzes of stellarator configurations among many other effects, it had not been singled out as a problem that needed to be addressed. We cannot use detailed analysis for stellarator optimization due to its computational cost. This is why Roscoe’s paper is important: It identifies the problem and proposes an efficient way to evaluate and optimize the stellarator shape to avoid it. This gives us the opportunity to develop stellarator configurations that are even better than existing ones.”

The mechanisms creating this issue are what are called “resonances,” which describe the paths that particles follow as they orbit the magnetic fields that run around the machine. When particles are resonant they repeatedly return to the point they started from. Such returns allow instabilities, or modes, in the hot, charged plasma gas to create what are called islands in the path of orbits, allowing the particles and their energy to escape the confinement.

White used a high-speed software code to search for instabilities called “Alfven modes” that can create islands in donut-shaped tokamaks, which are more widely used experimental fusion facilities. “So I thought, ‘Okay,’ I’ll go look at stellarators too,” he said. And in stellarators, “something very different is happening,” he found.

“Turns out that in a stellarator you don’t need modes,” White said. “In stellarators, when the number of periodic changes in the orbit of resonant high-energy particles matches the number of periodic changes in the magnetic field, particle losses can occur,” he said. “It’s like pushing a child on a swing. When you want the child to swing higher and higher, every time the swing comes back to you, you push it again, and that’s a push in resonance,” he said.

For White, “The problem up until now is that people have been focusing on the form of the magnetic field. But high energy orbiting particles drift across the field, so you must also consider the particle orbits.”

Going forward, he said, “seeing whether particle resonances in stellarators match the magnetic field period has got to enter into design conditions for finding a good reactor.”

Support for this research comes from the DOE Office of Science (FES). Coauthors of the paper were PPPL physicist Stephane Ethier and Andreas Bierwage of the Rokkasho Fusion Institute in Japan.

/PublicRelease. This material from the originating organization/author(s) may be of a point-in-time nature, edited for clarity, style and length. The views and opinions expressed are those of the author(s). View in full here.