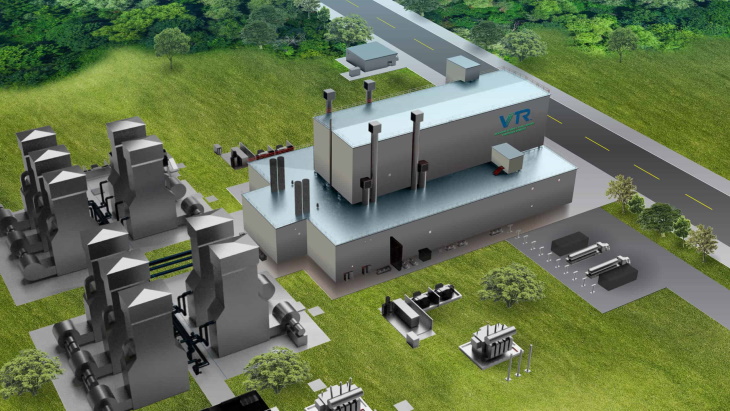 The US Department of Energy (DOE) has issued its Record of Decision on the Final Environmental Impact Statement (FEIS) for the sodium-cooled fast neutron reactor at Idaho National Laboratory (INL). If appropriated by Congress, the Versatile Test Reactor (VTR) would be the first fast spectrum test reactor to operate in the United States in nearly three decades.

A rendering of the proposed VTR (Image: INL)

The Record of Decision documents DOE’s decision to implement its preferred alternative, which is to construct and operate a VTR at INL, and to set up co-located facilities for post-irradiation examination of test products and management of spent VTR driver fuel. The reactor will operate as a national user facility. DOE has not yet decided whether to establish VTR driver fuel production capabilities at INL, Savannah River, or a combination of those two sites, the record notes.

The VTR program was launched by the DOE in 2018, bringing together a team of experts from national laboratories, universities and industry partners. The reactor will be used to provide a source of fast neutrons for testing and evaluating nuclear fuels, materials, sensors, and instrumentation to support the development of advanced reactor technologies. Equivalent testing capacity is currently only available in Russia, DOE said.

VTR experiments would dramatically reduce the time taken to develop nuclear fuels, materials, instrumentation, and sensors for nuclear reactors. Such research that could help extend lifetime cores, boost fuel performance, and even accelerate fusion materials research, according to DOE.

“Bringing a fast neutron test source back to the US is an investment in our transition to a future carbon-free economy,” Assistant Secretary for Nuclear Energy Kathryn Huff said. “Now that we have completed this important step in the decision-making process, I look forward to working with Congress to obtain the funding needed to someday make VTR a reality.”

The Record of Decision follows on from the release of the FEIS in May.