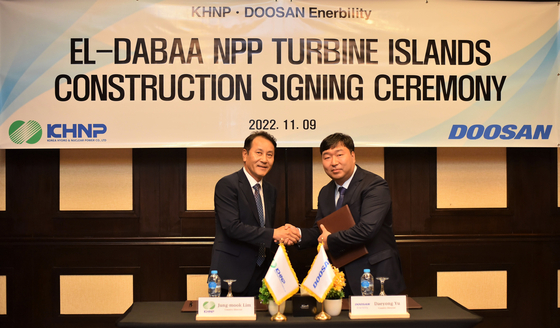 With the signing of the deal with the state-run KHNP, Doosan Enerbility will build a total of 82 buildings and facilities for the nuclear “turbine islands” — which houses a turbine and electricity generator — in the El-Dabaa nuclear power plant by 2029 The construction of the first turbine building will begin in August 2023.

In August, KHNP was selected by Atomstroyexport (ASE), a subsidiary of Moscow’s state-owned Rosatom, as the subcontractor and supplier for the turbine islands in the nuclear reactor plant.

ASE won the order from the Egyptian Nuclear Power Plants Authority to construct the country’s first nuclear power plant in El-Dabaa, 300 kilometers (186 miles) northwest of Cairo, in 2017. As part of the $30-billion nuclear power plant project, ASE will build four reactors rated at 1.2 gigawatts, while KHNP will oversee the construction of the main and auxiliary buildings of turbine islands.

Completion of the first unit is set for 2028.

“We will do our best for the project’s success, to help the government and KHNP in winning more overseas nuclear power plant projects in the future.”

The signing ceremony between KHNP and Doosan Enerbility was held in Cairo, Egypt, on Wednesday.

On Oct. 31, KHNP signed a letter of intent with Poland’s Zespol Elektrowni Patnow-Adamov-Konin and state-owned Polska Grupa Energetyczna for the 1.4-gigawatt Patnow project, which is estimated to be worth over 15 trillion won.