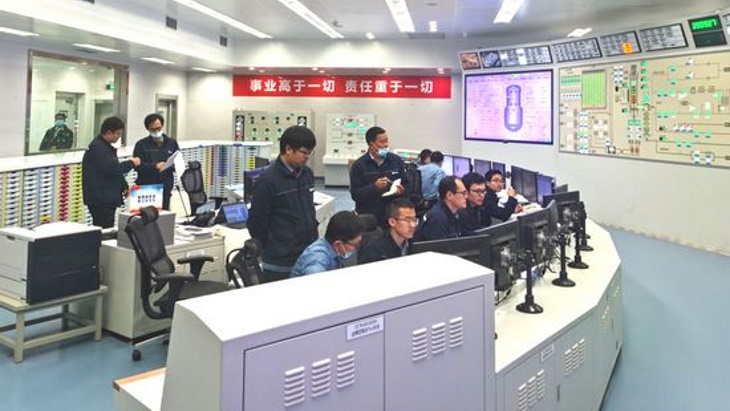 In the control room of the HTR-PM (Image: China Huaneng)

According to information from China Huaneng – the lead organization of the consortium for the construction of the demonstration plant – the second reactor reached the first criticality “in air atmosphere” on November 11th and will now undergo a test procedure similar to that of the first reactor.

Construction of the HTR-PM demonstration plant with two 250 MWt reactors driving a single 210 MWe turbine began in December 2012. China Huaneng is the leading organization in the consortium for the construction of the demonstration plant (with a share of 47, 5%). together with the China National Nuclear Corporation (CNNC) subsidiary China Nuclear Engineering Corporation (CNEC – 32.5%) and the Institute of Nuclear and New Energy Technology (20%), the research and development leader of Tsinghua University. Chinergy, a joint venture between Tsinghua and CNEC, is the prime contractor for the nuclear island.

Construction of the 210 MWe Shidaowan HTR-PM demonstration plant began at the end of 2012. The successful operation of the plant should pave the way for commercial 600 MWe plants (6×250 MWt, a total of 655 MWe).

The first reactor of the HTR-PM, which reached first criticality on Sept. 12, has now completed zero power physical tests under a helium atmosphere, and work on the first power is currently underway, China Huaneng said.