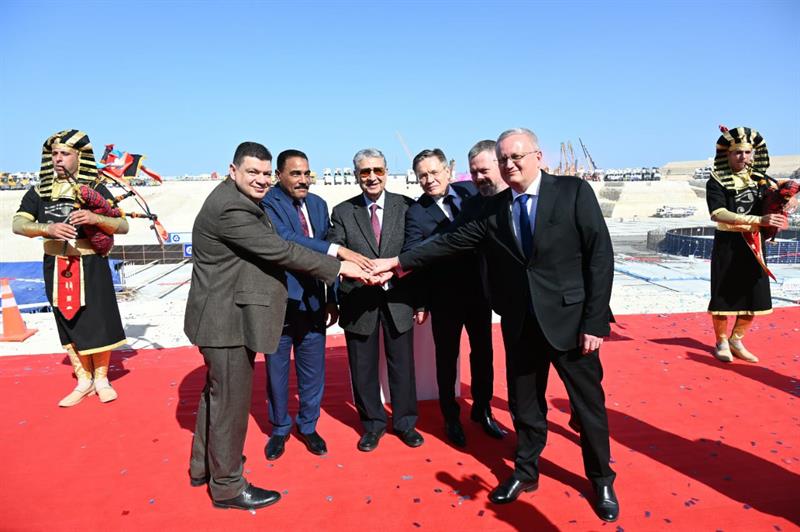 Mohamed Shaker, Egypt’s minister of electricity, and Alexey Likhachov, director-general of Rosatom, the Russian state-owned nuclear engineering company in charge of building the plant, attended the celebration, giving the green light for laying down the first concrete foundation works for El-Dabaa 2, according to an official statement.

The contracts between Egypt and Russia for building the DNPP’s four nuclear reactors were signed during a visit paid by Russia’s President Vladimir Putin to Cairo in the summer of 2015, and they entered into force in December 2017.

“We are keen that the construction works go according to schedule and without any delays. I would like to state that the Egyptian-Russian team that is in charge of implementing the Dabaa project has shown the highest levels of professionalism and so it is expected that we finalize this project long ahead of schedule,” Shaker said.

Rosatom’s director-general Alexey Likhachov said, “the launch of construction at El-Dabaa means that Egypt has already joined the nuclear club. This is the largest example of Russian-Egyptian cooperation since the Aswan High Dam in the 1960s.”

“Let me also emphasize that the El-Dabaa project is set to have an important impact on Egypt’s social and economic life and will also help Egypt gradually move to low-carbon sources of energy and pave the way for sustainable development in the future,” hey. concluded

“The laying down of the first concrete foundations of El-Dabaa’s second nuclear reactor comes less than four months after Egyptian and Russian officials celebrated the construction of the first reactor on 20 July and two months ahead of schedule,” said Amgad El-Wakil, the chair of Egypt’s Nuclear Power Plants Authority.

He revealed that the DNPP’s first nuclear reactor will go into operation in 2028.

“Without the effective role of the political leadership of Egypt under President Abdel-Fattah El-Sisi and Russia under President Vladimir Putin, it would not be possible to undertake the El-Dabaa nuclear power project. I would like to note that we still have a lot to achieve in Egypt’s long-awaited nuclear dream,” El-Wakil added.

El-Dabaa is Egypt’s first-ever nuclear power plant and is designed to generate nuclear energy for peaceful purposes in collaboration with Rosatom.

The El-Dabaa plant is situated 135 km southwest of the Mediterranean city of Alexandria and 320 km northwest of the capital Cairo.

“Rosatom wants to build a state-of-the art plant with the Russian VVER-1200 innovative GEN+3 design, which is the most common technology used today in generating nuclear power around the world,” said El-Wakil.

“The Dabaa plant will meet the highest safety standards in compliance with the International Atomic Energy Agency’s (IAEA) safety regulations and, as a result, the plant will be able to withstand earthquakes, airplane crashes, explosions, and even tsunamis.”

“The supervision of the IAEA was a necessary step before we began the actual construction of the first reactor on the ground,” he said.

According to various reports, the DNPP will cost around $30 billion. The project is being financed through a $25 billion loan extended by Russia to Egypt – with the remaining 15 percent to be covered by the Egyptian treasury. Egypt will start repayment of the Russian loan in 2029, at an interest rate of 3 percent annually.

Small-scale nuclear power an option for the private sector – News24

The mechanism of acentrosomal spindle assembly in human oocytes – Science