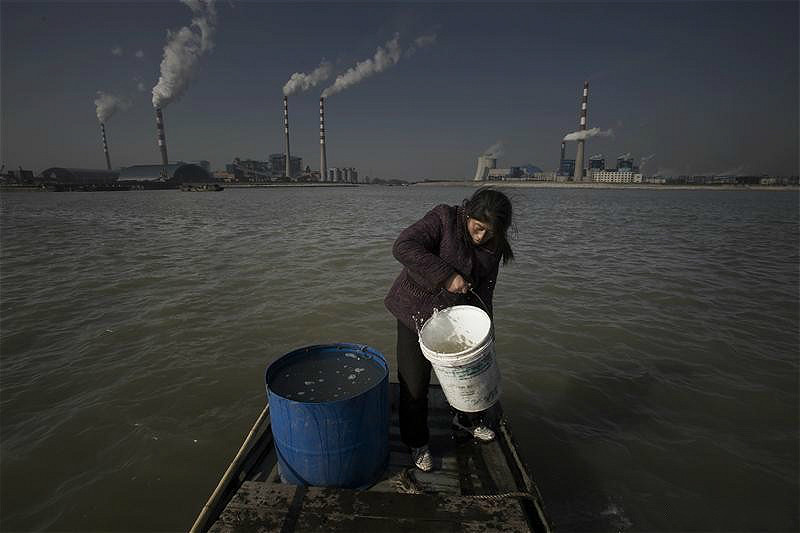 End capitalism and dictatorship to save the planet

Capitalist governments around the world boast they are making progress in the fight against climate change. But war, deglobalization and even the pandemic – all expressions of a capitalist system in crisis – become excuses for continued increased use of fossil fuels.

The CCP (so-called Communist) dictatorship in China), likes to portray itself as a “green superpower” but is one of the worst climate villains. Yet China’s working class and poor are among the most vulnerable to ecological destruction. Up to 57 million people in China could be displaced by rising sea levels by the end of this century – most of these in Shanghai and Guangzhou.

Chinese capitalism is addicted to coal. In 2021, over half the capacity of all the world’s new coal plants was in China. As the economy stagnates, the dictatorship is trying to increase coal usage to boost growth figures again. Many previous restrictions on coal production have been lifted this year. An extra US$15 billion in loans has been issued for coal projects. Because of Western sanctions, Russian coal is also now far cheaper. The Chinese government cut import tariffs for coal to zero from 1 May.

At COP26 (the Glasgow 2021 UN climate summit) China was one of the countries that refused to sign the agreement to reduce coal use. Despite Xi’s pledge to “stop building new coal-fired power plants abroad”, the reality of Chinese imperialism is much different. Plants already under construction by Chinese companies are not covered by Xi’s pledge. These plants could produce 300 million tonnes of carbon emissions a year, the equivalent of Spain’s annual emissio

On the horizon is also a water crisis. Accelerating glacial melt reduces available freshwater. On the Tibetan plateau, known as the world’s “Third Pole”, temperatures have risen by 3-3.5 degrees over the past 50 years.

China’s biggest river, the Yangtze, has received 13.9 percent less freshwater since the 1990s. As early as 2030, China could encounter a tipping point where water consumption surpasses water supply. The CCP’s ‘fix’ is a massive US$62 billion South-North Water Transfer Project. This means the 330,000 people living in the areas where the huge dams are to be built will be forcibly relocated with little compensation and no jobs. The destruction of habitats that these entails will create imbalances in aquatic ecosystems and lead to further deterioration of water quality.

Despite being a ‘mega-project’, ultimately this is a band-aid against China’s shrinking water supply. Without eliminating fossil fuels, global warming will continue to accelerate drought. Sea levels along China’s coastline are rising at an alarming rate and last year were 84 mm higher than in 1993-2011. By 2100, half of Shanghai will be underwater or flooded. China’s internationally lauded response has been to build “sponge-cities” (cities built to soak up and release water like sponges). But only 15 percent of construction projects are central government funded, with the rest acquired by giving banks and developers tax waivers. Banks then use the returns on investment in “sponge cities” to continue investing in heavily polluting industries.

The capitalist dictatorship also prevents the media from reporting on illegal and substandard construction methods, which means that projects that are claimed to have delivered in fact do not work. In the Henan floods of 2021, said to be the worst rainfall in 1,000 years, automatic flood controls and pumping systems in Zhengzhou’s “smart tunnel” catastrophically failed.

As a result, hundreds of cars got stuck in the flooded tunnel and six people were killed (a total of 398 people died in these floods). This and other disasters underline the need for independent labor unions in China – banned by the dictatorship – to exercise democratic control, decide when to suspend work and properly inspect new infrastructure.

The CCP has pledged to add “at least 570 GW” of wind and solar power from now until 2025. But subsidies for renewables are being phased out, and the pace of wind power expansion appears to be slowing in 2022. Official figures also hide how much green energy is actually being bought by power companies, as coal-powered electricity is often cheaper.

To achieve “carbon neutrality by 2060”, Beijing plans to expand nuclear power seven-fold by mid-century. Given the CCP’s ruinous track record of cost-cutting construction scandals in other projects, not one iota of trust should be placed in them to operate nuclear plants safely. Already, dangers in operation and spent-fuel storage are escalating due to the growing dependency on outsourcing and subcontractors.

Only democratic planning, freed from the shackles and constraints of capitalism, can enable a rapid transition to the renewable energy system that we need to secure the future of humanity and the planet.