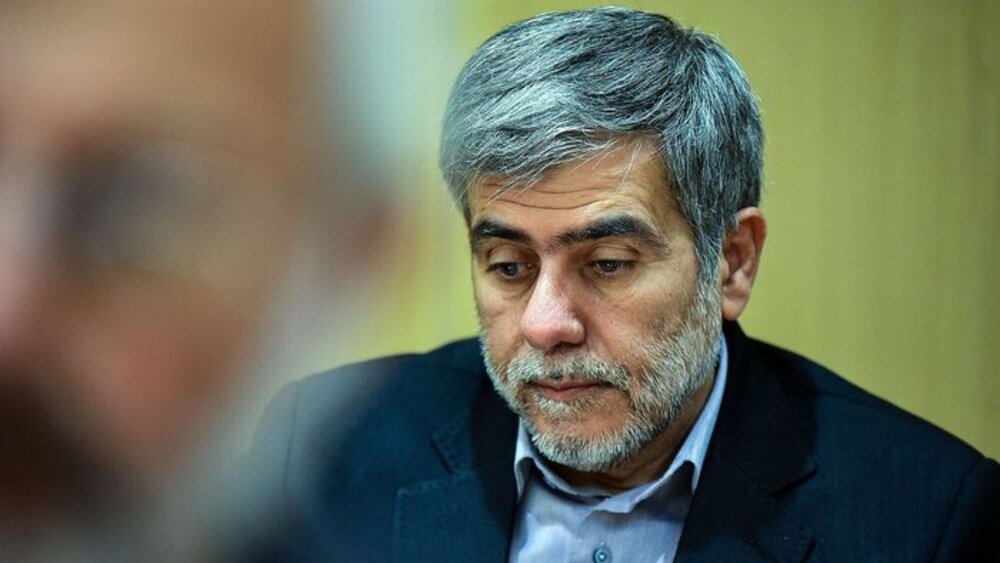 TEHERAN – Fereydoun Abbasi, former head of the Iranian Atomic Energy Agency (AEOI), supported the appointment of Mohammad Eslami as the new IAEA chief and described him as a competent person.

In an August 29 order, President Ebrahim Raisi appointed Eslami vice-president and chief of the AEOI, replacing Ali Akbar Salehi, who had held the post since August 2013.

Eslami holds a master’s degree in civil engineering from Ohio University. He also holds an MBA in Global Aviation Management from the University of Sharif and Royal Rhodes University.

However, some, including nuclear experts, say that the IAEA should be headed by someone who specializes in nuclear science.

Abbasi, a nuclear physicist, opposes such a view, saying everyone should help Eslami run the organization.

“I expect Mr. Eslami to implement the strategy of the system, whatever it is, well and receive help from relevant experts and specialists. I am optimistic for him and hope that this optimism will lead to good results, ”Abbasi said in an interview with ISNA published on Saturday.

Abbasi, now a Member of Parliament’s Energy Committee, said: “Many did not expect Mr Eslami to be selected to head the Atomic Energy Agency. His name has not been heard among names mentioned in cyberspace or in speculation.”

“90% of the processes in the nuclear industry are similar to those of oil, petrochemicals, gas, etc.”

“It has been suggested in some quarters that he will remain in the Ministry of Transport and Urban Development and is one of the ministers who will remain in that administration from the previous government. Rostam Ghasemi was chosen to become Oil Minister and eventually Mr. Oji was nominated to head the Oil Ministry. “

Abbasi noted that the Ministry of Transport and Urban Development was the right choice for Ghasemi as it was compatible with his managerial and technical background.

As a person who is familiar with international regulations and research and education work, Eslami is fit for the job, the MP stated.

Abbasi said, “One of the important parts of the nuclear industry is the construction of reactors and the main part is the heart of the reactor. This is where mechanics, heat and temperature transfer, pressure and steam generation are important and these problems exist in every industry.” . Like other power plants with turbines, it only has its own turbine here. “

So when someone has done industrial work, Abbasi pointed out, Eslami knows a lot about the process.

Eslami is a person who has a leadership background, running factories, doing scientific research in large industries and having trained and directed great human resources, the MP said.

The former nuclear chief continued, “Also, Eslami was a governor who was deeply concerned with people’s lives. I believe we shouldn’t just focus on radioactivity and nuclear technology in managing the nuclear industry.”

Abbasi suggested that Eslami appoint a deputy with knowledge of the nuclear industry and an expert in legal and international affairs.

He said Gholamreza Aghazadeh, who was not a nuclear expert, had headed the atomic energy organization for 12 years.

Having learned oil disciplines and knowing about OPEC and international negotiations, Aghazadeh got into the nuclear industry and used his experience, even hiring staff from the oil ministry and oil standards and promoting the nuclear industry, Abbasi said.

Regarding the criteria for the appointment of Eslami, the former head of the AEOI stressed that the necessary assessments had been made when he was elected and stressed that different people with different experiences had entered the organization so far.

“But the problem with nuclear energy is that we unfortunately could not train managers as consistently as we did with experts, ie we did not see a uniform process in this regard. People should be trained and predicted,” repeated the MP.

Elsewhere in his remarks, Abbasi said: “Personally, during my short time in the organization, I have tried very hard to train managers in various aspects and to prepare them for higher positions. If this trend had continued, we would certainly have had a number of managers in various fields today. In my opinion, no effort has been made in the past eight years and the circle of managers and the rotation of executives have been limited. “

Commenting on the characteristics of the AIA’s new head, Abbasi said, “Mr. Eslami was the head of the Defense Industry Education and Research Institute. Usually the military personnel must be within the bounds of knowledge and the Department of Defense, charged with defending the country by building equipment, must have a high level of academic knowledge. “

“The person who runs the institute directs both the Department of Defense’s scientific research centers and with other universities. During his tenure as director of this institute, Mr. Eslami has stood with all of the country’s universities in technology and engineering and is also familiar with most of the country’s defense complexes. Also, as I said above, his experience in road and town planning, governorate, etc. is important. “

“It is not that we connect this part with the defense parts. The scientific and technical development of the countries of the world has started in some military areas. A reactor is an energy system that contains many sciences and has nothing to do with it.” Defense, “emphasized Abbasi.

The Member of Parliament’s Energy Commission stated: “We should put the best professor of nuclear engineering at the head of the Atomic Energy Organization, and if he does not have leadership experience in this field and in technical and industrial fields, he will have no effectiveness.”

Commenting on the priorities Eslami should address during his tenure, the former AIA Director noted, “Mr Eslami should be thinking about several things at once; the first is that the nuclear issue is an ongoing challenge and in that context we need to move on.” Negotiations to solve the country’s problems. We have to support the (nuclear) negotiating team technically and legally. That was done during my tenure and has been done so far and will continue from now on. “

“Second is power generation. We have a reactor in operation, for which technical support, delivery of parts and tools should be in the foreground and, in general, preservation is very important. The first block of the Bushehr power plant has been around for 10 years and is one of the country’s priorities, so debts must be paid off and fuel supply must be a priority.

We also have two more reactors under construction that are behind schedule with construction and commissioning; they had to go into orbit this (Iranian) year, which has not been possible before, so Eslami has to do something to have these two reactors completed in 4 years. “

Regarding the responsibility of the administration, he said: “In this context, the administration should support the timely commissioning of the reactors and, according to the order of the energy ministry, also plan the delivery of nuclear energy so that more orders for the construction of the reactor are completed, as the energy ministry announced. Small reactors and accelerators should also be considered. ”

He stated: “The use of radiation is effective not only in medicine, but also in industry, agriculture and geology … and this can develop the physics and basic sciences of the country. This is a huge field, the turnover and capital of which is even greater than that of nuclear power, and we have good capacities in the country. “

The MP emphasized that these measures are possible despite the sanctions and the political and nuclear restrictions and stated: “Eight years ago we did this with internal energy. We operated three small reactors working on improving the facilities in Shiraz, and Tabriz and we were in the early stages of work. “

Abbasi added, “We talk a lot about smelting, but how we can get a recovery in this area. I believe that the tech technical support that we have on centrifuges and lasers should be managed and used to support theoretical questions “in the case of melt problems.”

“We have to prevent our mastery and development of centrifuges from going beyond knowledge. We shouldn’t keep chasing higher SWUs. Of course, producing SWU 1000 is not bad, but if we can have a stable SWU, for example SWU 10, it’s good, and now we need to move towards the industrialization of this machine and transfer the technology to other areas, including the Smelt to compete with countries and participate in global smelting projects. The construction of particle accelerators is also very important in this area, “emphasized the MP.

Stressing that preparations for all of this have been made in the country, he stated: “We simply do not have the coherence necessary to develop it and we hope that Mr Eslami will achieve that coherence during his term in office.”