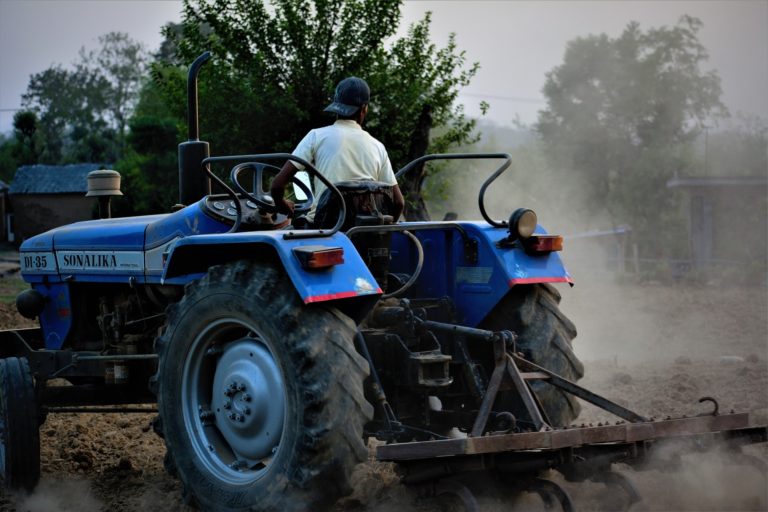 Biochar, charcoal produced from plant material and stored underground for a long time, can emerge as a nature-based solution that could help in climate mitigation and address sustainable development goals, a new review suggests.

The review by a team of researchers from the Indian Institute of Technology, Delhi (IIT Delhi) estimates that biochar could sequestrate an average of 376.11 megatonnes of carbon dioxide equivalent carbon in the soil, and could help India reduce 41.41–63.26% of emissions from agricultural and its allied activities.

In addition, biochar is a potential natural solution to improve soils, as it increases soil fertility and microbial activity; and can be added as a compost. It also can help in water treatment, which would help it address sustainable development goals (SDGs) focusing on good health and well-being, clean water and sanitation, the review led by Priyanka Kaushal, assistant professor at IIT’s Center for Rural Development and Technology , says.

Biochar could help India reduce 41.41–63.26% of emissions from agricultural and its allied activities. Photo by gambition786/Pixabay.

An added benefit is biochar’s potential use to adsorb heavy metals such as such as lead, mercury, cadmium and arsenic. Products made using these heavy metals are heavily used in agriculture, and industries such pigmentation, building materials, and water transporting pipes.

Based on their estimates of biochar potential from various crop residues, the IIT team reports that the conversion could cut down the release of greenhouse gases such as carbon dioxide and carbon monoxide; oxides of nitrogen and sulphur; and deadly pollutants such as volatile organic compounds, very fine polluting particles and soot.

The scientists estimate that in India, biochar conversion of 517.82 mega tonnes (MT) of crop residues and soil application at 20 tonnes per hectare could sequestrate an average of 21 MT carbon dioxide equivalent of carbon due to enhanced crop yield.

Similarly, soil amelioration could sequestrate 311 MT of carbon dioxide equivalent carbon in the top one meter of soil due to reduced mineralization of soil organic carbon, and save about one MT of nitrogen and about half an MT phosphorus each year.

The IIT team is the first to offer more precise estimates of biochar production, net energy potential after deducting energy consumed in its production, and percentage efficacy of production, Kaushal told Mongabay-India. For example, one has to factor in the energy used in its transport, and its processing including materials used in the conversion. “We have described the entire flow process diagram and net estimates.”

The research’s importance lies in its attempts to estimate the true environmental footprint of biochar production, says Kaushal. Pre-processing crop residues such as chopping and drying, transportation, storage, and handling, and biochar production require significant heat and energy; as do removing the up to 30% moisture from fresh crop residues through sun-drying, solar drying, and preheat treatment.

Also, several factors affect biochar production, the IIT authors report. These include the processing temperature, heating rate, reactor pressure, and the biomass type such as the presence of lignin, cellulose, hemicellulose, inorganic substances, and moisture.

The findings add to previous findings by Rajpal Shetty, scientist at the Institute of Botany, Plant Science and Biodiversity Center Slovak Academy of Sciences, Bratislava, and his colleagues on the potential of biochar obtained from different feedstocks. Shetty’s team worked on the potential of biochar obtained from feedstocks such as eucalyptus, rice husk, and bamboo, on decreasing soil acidity, especially aluminum toxicity in highly acidic soils. Acidic soils, a major problem in India, usually tend to have low soil fertility and suppress crop growth, requiring remediation, Shetty explains.

His team’s results suggest that biochar, which is alkaline and has good adsorption capacity, has the potential for treating soil acidity and aluminum toxicity. Biochar from eucalyptus wood was found to consistently decrease soluble and exchangeable fractions of aluminum in soils. Rice husk biochar improves crop yield in only acid soils without aluminum. “So, site-specific study needs to be conducted before applying biochar.”

Shetty says that biochar has great potential for soil amalgamation and reducing dependence on synthetic fertilisers to increase/maintain crop yield. “The reduced ecological footprint of synthetic fertilisers is essential to achieving sustainability in India’s agricultural production in the long term.” 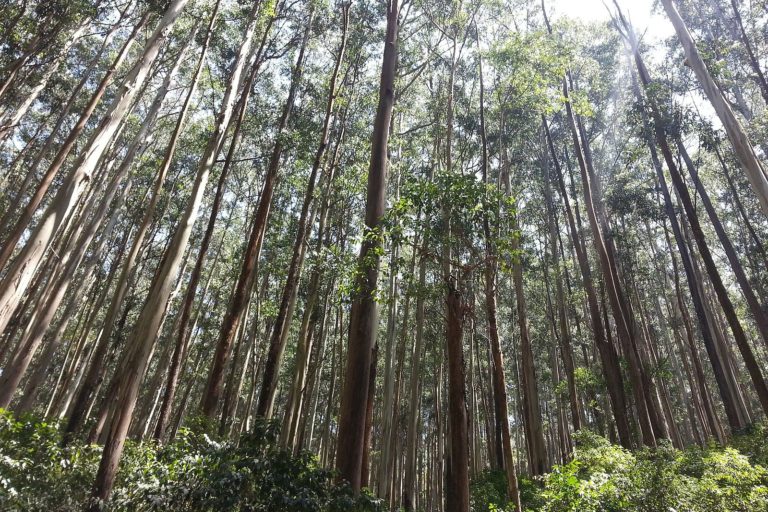 Kaushal and Shetty are confident about the role of biochar in climate mitigation – efforts to reduce or prevent greenhouse gas emissions. Shetty says biochar is rich in carbon and can be added to waste soils and forest lands to sequester carbon. Biochar has been reported to fix greenhouse gas emissions from soil, for example, nitrous oxide emissions, says Shetty. And it will reduce the dependence on the energy-guzzling synthetic fertilisers industry.

An added advantage is that converting crop waste and other agricultural residues to biochar can be an alternative solution to crop burning issues in India, which also contributes to warming.

A study published in 2021, which analyzed the carbon footprint of four different methods to dispose of one tonne of municipal waste – disposing in an authorized landfill, disposing in an informal landfill, composting and in a biochar reactor – showed “the very clear potential for climate change mitigation from biochar production using low tech and therefore accessible technology in a typical developing world context.” The study reports that “the carbon footprint of producing biochar was lower than for composting and biochar and compost both had carbon footprints significantly lower than landfilling.”

But Priyadarshini Karve, who started her company Samuchit EnviroTech in Pune, which works on biochar kilns and offers training in its use, says that with agri waste processing, there is a need to be more cautious. “Mitigation is about stopping extra carbon dioxide (and other GHGs) from going into the atmosphere,” she points out. “The one and only way to do this is to reduce the use of fossil energy.”

One concern is that “one may indulge in excess use of energy and then compensate for the emission by carbon sequestration through biocharring,” says Karve. “This will not solve the climate change problem in the long term. We must mitigate greenhouse gas emissions first by reducing consumption of energy and material goods.”

Cost and other limitations

There are concerns about the cost implications too. The labor cost involved in biocharring is high and, therefore, converting the char into saleable products may be the only way farmers would agree to use the process, says Karve. “In that case, the sequestration, at least directly in the farm from where the biomass came, may not happen. On the other hand in non-fuel applications ultimately the char will end up in some soil somewhere.”

Karve says the process will have capital expenses and operating expenses, and the portable kilns that her company develops do not require additional land. But the main bottleneck will be the labor cost.

Shetty too says that the biochar technology “is always expensive at its initial stage.” However, the price decreases over time as the demand picks up, which in turn spurs innovation and competition.

India is a largely agrarian country, with plenty of crop residues and agricultural wastes to produce biochar. “So, once commercialized products are available, over time it can be affordable for the small and marginal farmers,” Shetty says.

Another major problem, says Karve, is that in India biocharring will not work during the four months of monsoon rains. Also, there is a need to dispose of agri wastes only during the harvesting season, and there may not be sufficient amounts of biomass wastes available to keep the kilns operational to full capacity at other times of the year.

“All of these limitations have prevented this process from taking off as a business activity,” says Karve. “However it can work as a side business for small and marginalized farmers.” Her company’s portable biochar kiln, for example, costs less than Rs. 10,000. “If the farmers adopt the strategy of using the agri waste to make biochar and manufacture and sell biochar-based products it might even create an additional income stream for them,” she says.

There are other bottlenecks. Soil types differ throughout India, as do the properties and effects of biochar, point out Shetty. “So, all types of biochar may not be suitable for every type of problem and site (in India).”

Also, lab studies need to be replicated in the field conditions to study the true impact before making unanimous recommendations. “So, more research needs to be done on controlling the desirable properties of biochar and also simplifying the processes involved in biochar production,” he says.

There is also a need for certification of the quality of biochar too, says Shetty. He cites the example of some companies in Europe that claim to have European certification for producing commercial biochar like NOVO CARBO GMBH, Swiss Biochar GmbH, Sonnenerde, and Carbonex.

Biochar application is at a nascent stage in Indian agriculture. It would require extensive adoption of biochar as an eco-fertiliser to benefit enhanced soil health and crop yields.

Responses to satirical column on the Second Amendment were informative. – South Bend Tribune

Architecture of the linker-scaffold in the nuclear pore – Science