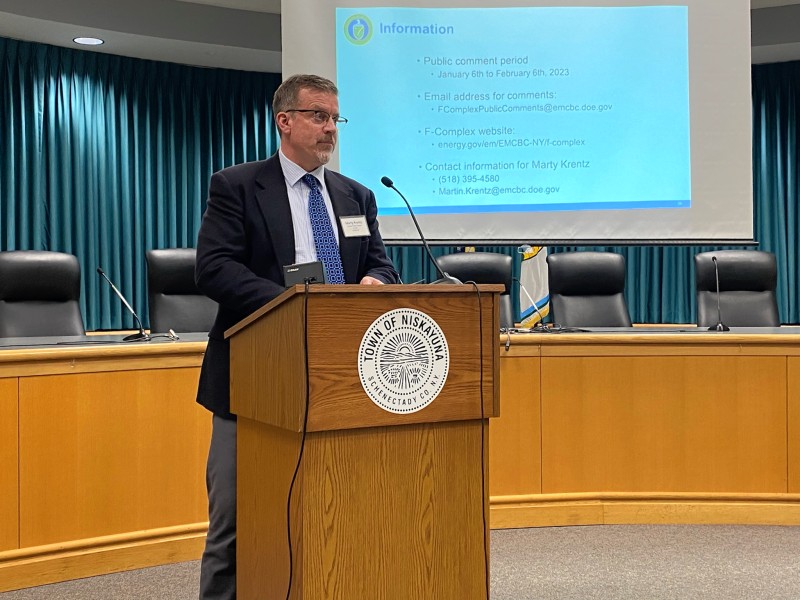 NISKAYUNA — Three options are on the table for the potential removal of a portion of the Knolls Atomic Power Laboratory in Niskayuna.

Representatives from the US Department of Energy (DOE) hosted a public forum on Thursday evening at Niskayuna Town Hall to present three potential alternatives for remediating the lab’s F-Complex, which is an interconnected group of five buildings at the River Road site.

The complex, which was built between 1951 and 1970 and once stored nuclear materials and several research reactor projects, has reached the end of its useful life. All three test reactors have been defueled and are in a safe and stable condition, according to DOE.

During the Thursday session, Martin Kretz, Federal Project Director with the US Department of Energy, detailed the three options the government agency is exploring to address the F-Complex, which contains materials including asbestos, lead and mercury.

The first option would entail taking no additional action beyond the current monitoring and continued maintenance of the empty facilities. According to the DOE, that alternative would cost DOE Naval Reactors, who run the site, approximately $17.5 million over the next 30 years.

The second option would see the DOE clean out the complex’s defueled test reactor assemblies while leaving the shell of the F-Complex in place at a cost of approximately $38.4 million over the next 30 years.

The third option, which Kretz noted was the current recommended government alternative, would see the F-Complex demolished after the defueling process, which would allow Naval Reactors to utilize the site for future use. The cost of demolishing the F-Complex is projected to be $68.4 million.

Kretz said the buildings are not a danger to the public if nothing was done to remediate the complex.

“It’s in a safe condition,” he said after the forum. “It’s just a matter of keeping it in a safe condition via monitoring and repairs as necessary. There’s no immediate danger. In the CERCLA (Comprehensive Environmental Response, Compensation and Liability) process it’s a non-time critical removal action. So it’s not like a Superfund site where there’s been a release and there’s an imminent hazard where you have to get there and do something right away. There’s no immediate hazard that needs to be addressed, it just doesn’t make sense to just leave it there for perpetuity.”

According to the DOE, the number of workers in the buildings were greatly reduced two decades ago with the remaining office staff moved out of the complex in the middle of 2022.

Following the meeting, Kretz said that the option of demolishing the complex would represent standard practice for the federal agency.

“It’s very routine for the Department of Energy,” he said. “Because outside of these small laboratory-scale research reactors, it’s typical of any vintage 1950s-era building.”

Niskayuna Town Supervisor Jamie Puccioni said the town has been kept in the loop as the government weighs its options with the Niskayuna facility.

“I met with the representatives from Knolls and some folks from the Department of Energy in February and they informed me about this process that they were going to be undergoing to engage the public around possible courses of action in relation to this F-Complex,” she said on Friday. “They asked for the town’s support in keeping the residents informed. My goal is that I want to facilitate a transparent process.”

The town agreed to let the DOE use town hall for the public meeting on Thursday evening and facilitated a video live stream of the event.

Puccioni said that she does not currently have a preference for which option the DOE chooses and will let the public process play out.
“I’ll be listening and learning just like all of the other residents,” she said. ““Knolls has been here since 1946 and they’ve been a good neighbor.”

During the public comment portion of the meeting, resident Nick Masucci expressed concerns about the safety of dismantling the F-Complex. At a cleanup at the plant in 2010, radioactive dust was released while contractors were working at the Niskayuna facility.

“I’d like to make sure that they have adequate monitoring in place,” Masucci said after the meeting. “Personally I think that the number three option of taking the thing out is probably the way to go. But hopefully they’re competent.”

Greg Chandler, Environmental Engineer with DOE, said that if the third option were chosen, the entire Niskayuna lab site would not have to be shut down completely while the F-Complex was being demolished.

“Everything would be very confined in that work area,” he said following the meeting. “That’s how good the controls are. It’ll be deconstructed very deliberately to make sure that everything stays in that work area.”

The public comment process will continue through Feb. 6, with the department accepting comments at [email protected].

Kretz noted during the meeting that the DOE would examine the public feedback in the coming months before issuing their plan of action regarding which option is chosen in May or June.

Ensure access to everything we do, today and every day, check out our subscribe page at DailyGazette.com/Subscribe

More from The Daily Gazette:

Suffolk: Sizewell C ‘should not get license’ due to erosion – East Anglian Daily Times