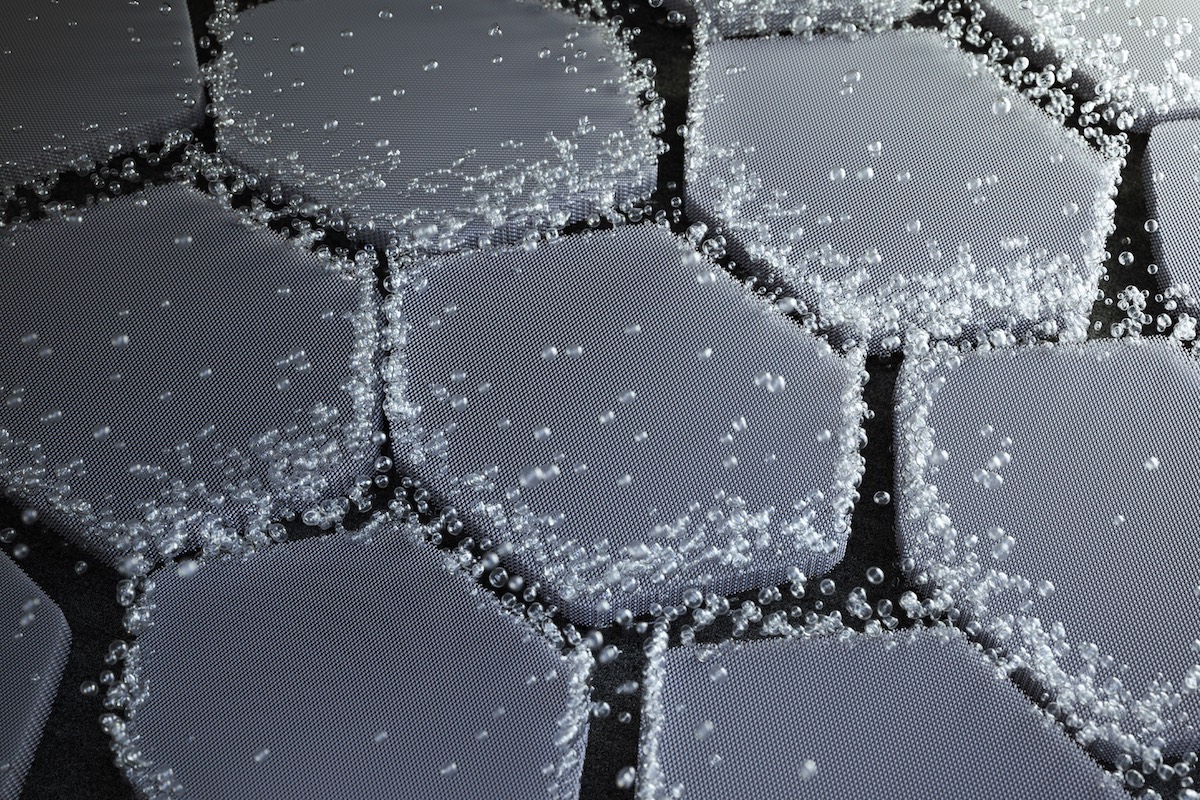 New ways to spy on catalysts

The catalyst they examined was cobalt oxyhydroxide, which was in the form of flat, six-sided crystals called nanoplates. The edges were sharp and extremely thin, so it was easy to see whether a reaction was taking place at the edges or on the flat surface.

About a decade ago, Patrick Unwin’s research group at the University of Warwick invented a novel technique by which a miniature electrochemical cell could be inserted into a nanoscale droplet protruding from the tip of a pipette tube. When the droplet is brought into contact with a surface, the device images the topography of the surface as well as electronic and ionic currents with very high resolution.

For this study, Unwin’s team adapted this tiny device to work in the chemical environment of the oxygen evolution reaction. Postdocs Minkyung Kang and Cameron Bentley moved it from place to place across the surface of a single catalyst particle during the reaction.

“Our technique allows us to zoom in to examine extremely small areas of reactivity,” said Kang, who led the experiments there. “We are looking at oxygen production on a scale that is more than a hundred million times smaller than typical techniques.”

They discovered that, as is often the case with catalytic materials, only the edges actively promoted the reaction, suggesting that future catalysts should maximize this type of sharp, thin feature.

Meanwhile, Stanford and SIMES researcher Andrew Akbashev used atomic force electrochemical microscopy to pinpoint and visualize how the catalyst changed shape and size during operation, and found that the reactions that the catalyst initially had in its active state, differed greatly from those previously assumed. Instead of protons leaving the catalyst to trigger activation, hydroxide ions first settled into the catalyst and formed water within the particle that made it swell. During the activation process, this water and the remaining protons were driven back.

In a third set of experiments, the team worked with David Shapiro and Young-Sang Yu of the Berkeley Lab’s Advanced Light Source and with a Washington company, Hummingbird Scientific, to develop an electrochemical flow cell that can be integrated with X-ray radiation Microscope. This enabled them to map the oxidation state of the working catalyst – a chemical state associated with catalytic activity – in areas only about 50 nanometers in diameter.

“We can now begin applying the techniques developed in this work to other electrochemical materials and processes,” said Mefford. “We would also like to investigate other energy-related reactions, such as rapid charging in battery electrodes, carbon dioxide reduction for carbon capture, and oxygen reduction which enables us to use hydrogen in fuel cells.”