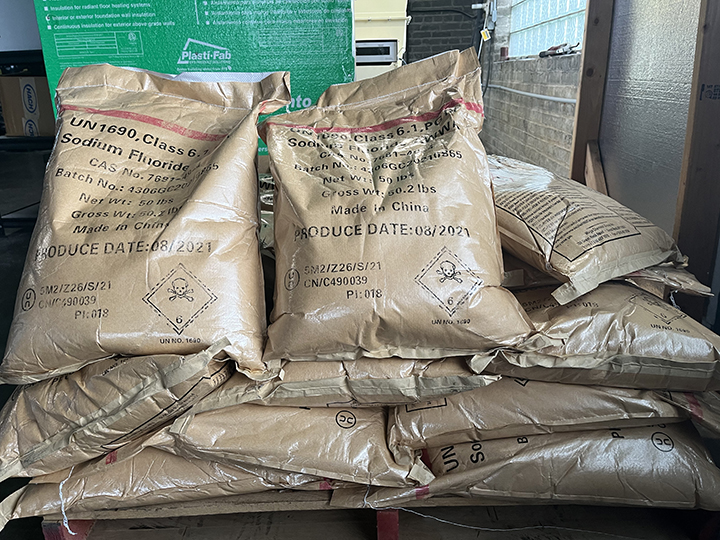 News Photo by Steve Schulwitz Large bags of fluoride sit in storage at the Alpena water production plant. The city has enough stock of the additive to get through the fall, but the Alpena Municipal Council is weighing what to do after the current inventory is exhausted.

ALPENA — For decades, the City of Alpena has added fluoride to its water supply, but that may change in the coming months.

Increased pricing and a potential lack of availability has the Alpena Municipal Council considering several options, including:

∫ Temporarily removing fluoride from its production process until costs stabilize and supply-chain issues are sorted out.

∫ Transitioning to a liquid version of the chemical.

Council has until the fall to make a decision as the city has enough fluoride to last until then.

Water fluoridation is the controlled adjustment of fluoride to a public water supply solely to reduce tooth decay.

The city — which has used fluoride since 1958 — confirmed the addition of fluoride is not required by the state or any federal regulatory agencies. However, the council is required to host a public hearing and allow citizen comments before officially ending the process.

In his report to council at its last meeting, Alpena City Engineer Steve Shultz said fluoride availability is expected to dwindle as prices climb.

After meeting with the Michigan Department of Environment, Great Lakes, and Energy, the state listed four options for the council to consider.

The city can choose to use sodium fluoride, which is different from the sodium silica fluoride it uses now. By doing so, there would be a large increase in cost because of the amount of sodium fluoride needed in the water.

The annual cost for the current product is approximately $7,600. Based on the required usage at the lower concentration, the new product would cost just over $33,000 per year, Shultz said in his report.

The council could choose to distribute a liquid fluoride called hydrofluorosilicic acid. But, it could cost more than $100,000 to retrofit Alpena’s water production plant to implement it and the method of adding fluoride creates a more toxic environment, officials say.

In December, Veolia Utility Manager Mike Glowinski said hydrofluorosilicic acid is extremely dangerous — touching it, or breathing it in can cause injury. The corrosiveness of it can also cause severe damage to the plant if vapors from the liquid or the liquid itself escapes containment.

The plan would require ventilation improvements if the council chooses this path too.

Glowinski added that about 10% of the water produced is consumed by people and the balance is used for cooking, cleaning, on lawns, and other household needs. He said because such a small amount is consumed, most of the fluoride in the treatment is wasted when water is used for other things.

According to the Centers for Disease Control and Prevention, drinking fluoridated water reduces tooth decay and cavities by about 25% in children and adults.

What Happens During a Teeth Cleaning?