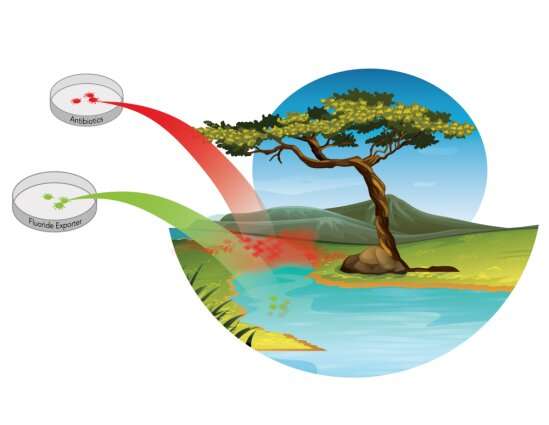 Fluoride to the rescue? Addressing the challenge of antibiotic-resistant bacteria

Artist concept illustration showing cells treated with antibiotics (red) reproducing in a river environment, while those genetically modified to remove the gene that produces the fluoride exporter (green) die in the presence of fluoride. Photo credit: Lillian Mckinney

Scientists have long been aware of the dangerous overuse of antibiotics and the increasing number of antibiotic-resistant microbes. While overprescribing antibiotics for medical purposes has troubling effects on human health, it also affects the increasing presence of antibiotics in the natural environment. The latter can be due to the improper disposal of pharmaceuticals, but also to the field of biotechnology, which relied on antibiotics as a selection tool in the laboratory.

“In biotechnology, we’ve long relied on antibiotics and chemical choices to kill cells we don’t want to grow,” said Michelle O’Malley, a chemical engineer at UC Santa Barbara. “If we have a genetically modified cell and only want that cell to grow in a cell population, we give it an antibiotic resistance gene. Introducing an antibiotic kills all non-genetically modified cells and only allows those we want – the genetically modified organisms [GMOs]-To survive. However, many organisms have developed the means to bypass our antibiotics, and they are a growing problem in both the biotech world and the natural environment. The subject of antibiotic resistance is a major challenge of our time and one that is becoming increasingly important. “

In addition, GMOs are associated with a containment problem. “If this GMO left the laboratory and successfully reproduced in the environment, there would be no predictions of what properties it would bring to the natural biological world,” said O’Malley. “With the advent of synthetic biology, there is an increasing risk that things we develop in the laboratory will escape and multiply in ecosystems they don’t belong in.”

Now, research done in O’Malley’s lab and published in the journal Nature Communications describes a simple way to combat both antibiotic overuse and GMO containment. It calls for antibiotics to be replaced by fluoride in the laboratory.

O’Malley described fluoride as “a fairly benign chemical that is abundant in the world, including in groundwater”. However, she notes that it is also toxic to microorganisms that have developed a gene that encodes a fluoride exporter that protects cells by removing fluoride found in the natural environment.

The paper describes a process developed by Justin Yoo, a former graduate student in O’Malley’s laboratory. It uses a common technique called homologous recombination to disable the gene in a GMO that encodes a fluoride exporter so that the cell can no longer produce it. Such a cell would still thrive in the laboratory, where fluoride-free distilled water is normally used. However, if it escapes into the natural environment, it will die as soon as it encounters fluoride, preventing it from multiplying.

Prior to this research, Yoo worked with the paper’s co-author, Susanna Seppala, a project scientist in O’Malley’s laboratory, to use yeast to characterize fluoride transport proteins that Seppala had identified in anaerobic fungi. A first step in this project for Yoo was to remove native yeast fluoride transporters.

Shortly after creating the knockout yeast strain, Yoo attended a synthetic biology conference where he heard a talk on a novel biocontainment mechanism designed to prevent genetically modified E. coli bacteria from leaking out of laboratory environments. During that talk he recalled, “I realized that the knockout yeast strain I was creating could potentially act as an effective biocontainment platform for yeast.”

“Essentially, Justin created a set of DNA instructions that you can give cells to help them survive when fluoride is around,” O’Malley said. “If I wanted to look for a genetically engineered cell in the lab, I would normally make a plasmid [a genetic structure in a cell, typically a small circular DNA strand, that can replicate independently of the chromosomes] that had an antibiotic resistance marker so it would survive if an antibiotic was around. Justin replaces that with the gene for these fluoride exporters. “

The method that O’Malley calls “low hanging fruit – Justin did all of these studies in about a month” also addresses a simple economic constraint on antibiotic-driven cell selection in biotechnology laboratories. Aside from fueling the rise of resistant strains of bacteria, she continued, “From a biotechnological standpoint, the process of making antibiotic-resistant organisms is damn expensive too. If you were to do a ten thousand liter fermentation, and that too.” Adding antibiotics could cost you thousands of dollars per fermentation. That’s an insane amount of money. “In particular, using fluoride in a low concentration would only cost about four cents per liter.

Seppala said clearly, “We would much rather use a chemical like fluoride, which is relatively harmless, abundant, cheap and can be used to do the same thing that a conventional antibiotic does.”

Yoo stated that the role of fluoride transporters was not clarified until 2013 when this project began. New approaches to implementing biocontainment have centered on the use of biological parts foreign to the organism of interest and focused on what Yoo referred to as “brilliant but complex systems” while potentially diverting attention from this simpler approach.

This document is subject to copyright. Except for fair trade for the purpose of private study or research, no part may be reproduced without written permission. The content is provided for informational purposes only.