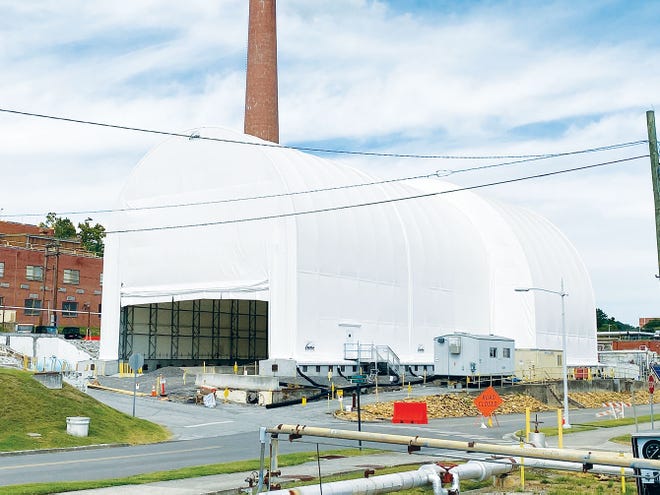 “This project kicks off our next phase of major demolition and cleanup at ORNL,” said Nathan Felosi, OREM’s portfolio project manager for ORNL, in a press release. “Our job is to clean up contaminated structures like these on the DOE’s list of high-risk facilities and make room for future research missions.”

The structures known as “hot cells” that are being demolished are heavily shielded concrete rooms that provided researchers with protection from highly radioactive material during the years that the laboratory was in operation.

The laboratory dates back to the Manhattan Project and the post-war period when one of the facility’s primary missions was the production of radioisotopes for medical, research, and industrial use.

Established in the early 1940s, the laboratory contained six hot cells that processed radioisotopes from ORNL’s graphite reactor and subsequent reactors for shipping.

The outer structure and four of the hot cells were demolished in previous years with funding from the American Recovery and Reinvestment Act of 2009.

UCOR performed several tasks to prepare the final structures for demolition. Workers cleared up contamination routes by pumping and grouting a 47 foot underground transfer tunnel that was previously used to load radioactive material into the hot cells.

The cleaning contractor also put up a six-story protective cover over the hot cells to ensure nearby research facilities were not compromised during the demolition. Using a 175 ton crane, the crews laid a foundation of 92 16,000 pound blocks. The workers then used the crane to erect 20 steel trusses for the frame, and they added nearly 12,000 square feet of fabric to complete the protective cover.

The crews also built an intermodal rail system to move boxes of demolition waste from the site. The system provides a safe way to move the debris outside of the cramped tent area. The boxes are then loaded onto trucks and transported for disposal.

“The removal of these hot cells is the first major demolition project related to ORNL’s environmental remediation activities,” said UCOR project manager Susan Reid in the press release. “UCOR is proud to be part of this effort, working with ORNL to remove unnecessary facilities and facilitate the site’s growing scientific missions.”