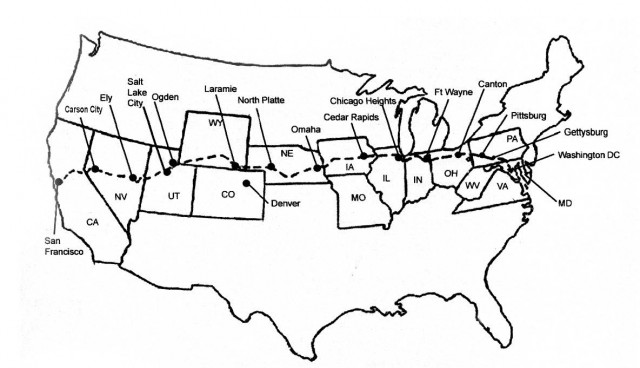 As mentioned in Part 1 of this article, the U.S. interstate system was officially named the Dwight D. Eisenhower National System for Interstate and Defense Highways in 1990 and was signed into law the day before the centenary of Eisenhower’s birth.

Since then, historians have written that President Eisenhower’s reasons for supporting a highway system stemmed from three key events. These were: his role as a military observer for the First Transcontinental Motor Convoy; his experiences during World War II and afterwards when he saw the German autobahn system (s); and the detonation of a hydrogen bomb by the Soviet Union in 1953, which raised concerns among lawmakers that the streets would be blocked and Americans would not be able to escape a nuclear attack.

The world war ended in November 1918; Maj. Dwight D. Eisenhower’s tank battalion had not yet been shipped to Europe before the end of the war. In the summer of 1919 he was assigned to the military’s first transcontinental motorized convoy as an observer. The aim of the convoy was to test military vehicles on the country’s existing roads and “identify the challenges of moving troops from coast to coast”. The convoy traveled 3,200 miles – from Washington, DC to San Francisco. Almost 80 vehicles of all sizes and nearly 300 military personnel were involved in the project.

This map shows the route of the first transcontinental motorized convoy from 1919. (Image: US Army)

When traveling in convoy, Eisenhower made notes for his report; This includes patchwork observations of the narrow and winding paved and dirt roads the convoy was traveling on, old bridges (some of which were older than cars), and other obstacles to travel. The convoy service helped him better understand the need for a network of interconnected roads and bridges.

The specifics of his report included roads so narrow that oncoming traffic was pushed out of the way, and bridge infrastructure that was too low for trucks. He was most critical of roads in the Midwest, but found that the roads used by the convoy in the eastern United States were more convenient for trucking. The majority of the US population lived in the east, which meant the road network was (for the most part) better. Even trucks of that time were much smaller than trucks today.

Eisenhower also praised the paved roads in California. An important observation was that the convoy was negatively affected by the various road levels that crossed the hills that were encountered.

As the Allied Supreme Commander in charge of the invasion of Europe, General Eisenhower oversaw the defeat of Nazi Germany. After the breakout from the beaches and hedges of Normandy, Allied armies sped through France and into Germany to pursue the retreating German Wehrmacht. As pointed out in a recent four-part series from FreightWaves Classics on the Red Ball Express, the American armies overhauled their utility lines and the Red Ball Express helped them resupply for nearly three months.

One of the signs along the route of the Red Ball Express. (Photo: Army.mil.com)

This was in contrast to the extensive motorway system that the Germans had built before the war. In his presidential memories, Eisenhower wrote: “During the Second World War I saw the superlative German Autobahn system – [the] national highways that cross this country. “

The Second World War in Europe ended in early May 1945. Eisenhower was commander of the American zone of occupation in Germany until November of that year. During this time, his troops used the highways (and began repairing stretches of them that had been destroyed during the war). He saw firsthand how useful the road network was for moving troops, equipment, and supplies.

Lieutenant General Lucius Clay was a graduate of the US Military Academy and a trained engineer. He helped direct the Allied logistical efforts after the D-Day landings. He was also an important advisor to Eisenhower during the war and during the Eisenhower presidency.

At the heart of the plan was to spend $ 50 billion (about $ 488 billion today) over a 10-year period building a “huge system of interconnected highways.” The committee’s proposal to Congress was based on four main points.

Safety was the first priority of the report. It pointed to the 36,000 road deaths in the US every year and their impact on the economy. Second, the report identified the physical conditions of the existing roads and their impact on the total cost of vehicle ownership. Poorly maintained roads had a negative impact on the economy due to increased transport costs. National security was the report’s third major lesson. The potential for a nuclear attack on the United States required the evacuation of major cities in an emergency, as well as the ability to move troops and equipment quickly down the country’s roads. Finally, there was the general health of the US economy. Road and traffic improvements were necessary to accommodate the growing population and to be “essential to the economy and efficient use of taxpayers’ money”.

The Interstate Highway System is the largest U.S. public works project in history. (It also extends for more than 65 years and continues at this point). It started when the Cold War between the US and the Soviet Union was a major budget priority and was constantly on the news.

The Cold War was also a major reason for the construction of the Interstate Highway System (IHS). Eisenhower was elected President in November 1952 and took office on January 20, 1953. Shortly afterwards, the long-time Soviet dictator Josef Stalin died. This led to a leadership struggle in the USSR that was ultimately “won” by Nikita Khrushchev, who was appointed General Secretary of the Communist Party of the Soviet Union.

A photo of President Eisenhower and Nikita Kruschev, the leader of the Soviet Union. (Photo: nps.gov)

In August 1953 the first Soviet hydrogen bomb was tested; That ended the leadership of the United States in terms of nuclear superiority. The leaders of the US and the West were very concerned about the new nuclear weapons of the USSR. In addition, the situation terrified the general public. At that time civil defense exercises were the order of the day; Air raid shelters were built and many (inside and outside the government) believed that nuclear war was on the horizon. Polls showed that 79% of the US believed an impending nuclear conflict to be possible. In the event of war, more than 70 million city dwellers would have to be evacuated on the street.

On this subject, the Clay Committee report states: “Rapidly improving the entire interstate system of 40,000 miles, including the necessary urban connections, is therefore critical as a civil protection measure.”

In June 1955 a large-scale urban evacuation drill took place. It didn’t go well (mass confusion as well as overcrowded evacuation routes) and underscored the need for the IHS. The Eisenhower government continued to campaign for a uniform road system for national defense. The Department of Defense (DoD) has been directed to join the effort.

A test area was set up in central Illinois to “evaluate road surfaces, road standards, and construction techniques,” among other things. Equipment and personnel for the tests were provided by DoD. Because of their experience in both world wars, senior military leaders understood that an effective road system is key to national defense. For example, during World War I, military truck traffic severely damaged some of the rudimentary roads used to bring troops to training camps and then to ports on the east coast. During World War II, the nation’s defenses were supplied both by rail and by truck. However, poor road conditions and the lack of uniform road standards had a negative impact on this supply expenditure at times.

Over a period of two years, US Army trucks drove more than 17 million kilometers on test roads in Illinois. These tests helped engineers develop standards for building and maintaining highways.

Congress passed the Federal-Aid Highway Act of 1956, which provided federal funding for the construction of highways.

The Missouri Highway Commission awarded the first contract to build the highway along famous Route 66 in rural Laclede County, 160 miles southwest of St. Louis. However, construction on the first section of the interstate began on August 13, 1956 in St. Charles County, Missouri. Kansas and Pennsylvania have also made competing claims that their states were the first to build working sections of the interstate.

President Eisenhower cuts the ribbon on a brand new section of the IHS. (Photo: US Army)

Regardless of which state was the first to build part of the IHS, when construction began in 1956 there was great enthusiasm for a uniform system of roads, bridges and tunnels. Construction of the IHS proceeded rapidly across the country and early in the 1990s, nearly 45,000 miles of freeway were completed.

This is an aerial view of a 13 mile stretch of I-65 that was part of the Mobile to Montgomery route. It cost $ 3.8 million to build and was not open to traffic at the time this photo was taken. (Photo: fhwa.dot.gov)

The author is indebted to the Federal Highway Administration and the US Army archives for the information used in this article.