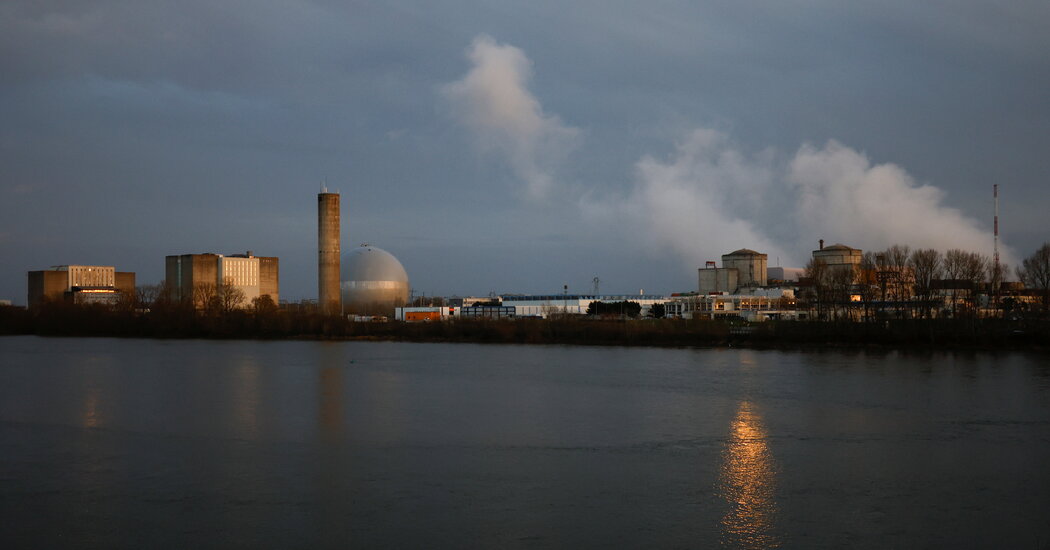 PARIS — Plumes of steam towered above two reactors recently at the Chinon nuclear power plant in the heart of France’s verdant Loire Valley. But the skies above a third reactor there were unusually clear — its operations frozen after the worrisome discovery of cracks in the cooling system.

The partial shutdown isn’t unique: Around half of France’s atomic fleet, the largest in Europe, has been taken offline as a storm of unexpected problems swirls around the nation’s state-backed nuclear power operator, Électricité de France, or EDF.

As the European Union moves to cut ties to Russian oil and gas in the wake of Moscow’s war on Ukraine, France has been betting on its nuclear plants to weather a looming energy crunch. Nuclear power provides about 70 percent of France’s electricity, a bigger share than any other country in the world.

But the industry has tumbled into an unprecedented power crisis as EDF confronts troubles ranging from the mysterious emergence of stress corrosion inside nuclear plants to a hotter climate that is making it harder to cool the aging reactors.

The outages at EDF, Europe’s biggest electricity exporter, have sent France’s nuclear power output tumbling to its lowest level in nearly 30 years, pushing French electric bills to record highs just as the war in Ukraine is stoking broader inflation. Instead of pumping vast amounts of electricity to Britain, Italy and other European countries pivoting from Russian oil, France faces the unsettling prospect of initiating rolling blackouts this winter and having to import power.

EDF, already 43 billion euros (about $45 billion) in debt, is also exposed to a recent deal involving the Russian state-backed nuclear power operator, Rosatom, that may heap fresh financial pain on the French company. The troubles have ballooned so quickly that President Emmanuel Macron’s government has hinted that EDF may need to be nationalized.

“We can’t rule it out,” Agnès Pannier-Runacher, the minister for energy transition, said Tuesday. “We are going to need massive investments in EDF.”

The crunch could not have hit at a worse time. Oil prices touched record highs after the European Union agreed to cut off Russian oil, intensifying economic pain in Europe and adding to a cost-of-living crisis that France and other countries are scrambling to address. The price of natural gas, which France uses to make up for fluctuations in nuclear-powered energy, has also surged.

But fixing the crisis at EDF won’t be easy.

With 56 reactors, France’s atomic fleet is the biggest after the United States’. A quarter of Europe’s electricity comes from nuclear power in about a dozen countries, with France producing more than half the total.

But the French nuclear industry, mostly built in the 1980s, has been plagued for decades by a lack of fresh investment. Experts say it has lost valuable engineering expertise as people retired or moved on, with repercussions for EDF’s ability to maintain the existing power stations — or build ones to replace them.

“EDF’s strategy, endorsed by the government, was to delay the reinvestment and transformation of the system,” said Yves Marignac, a nuclear energy specialist at négaWatt, a think tank in Paris. “The more EDF delays, the more skills keep getting lost, technical problems accumulate and there is a snowball effect.”

Mr. Macron recently announced a €51.7 billion blueprint to rebuild France’s nuclear program. EDF would construct the first of up to 14 mammoth next-generation pressurized water reactors by 2035, as well as smaller nuclear plants — the cornerstone of a broader effort to reinforce France’s energy independence and meet climate goals.

But the few new nuclear reactors that EDF has built have been dogged by huge cost overruns and delays. An EDF-made pressurized water reactor at Hinkley Point, in southwest England, won’t start operating until 2027 — four years behind schedule and too late to help Britain’s swift turn from Russian oil and gas. Finland’s newest EDF nuclear power plant, which started operating last month, was supposed to be completed in 2009.

EDF’s recent troubles began mounting just before Russia invaded Ukraine. The company warned last winter that it could no longer produce a steady nuclear power supply, as it struggled to catch up with a two-year backlog in required maintenance for dozens of aging reactors that was put off during coronavirus lockdowns.

Inspections unearthed alarming safety issues — especially corrosion and faulty welding seals on crucial systems used to cool a reactor’s radioactive core. That was the situation at the Chinon atomic plant, one of France’s oldest, which produces 6 percent of EDF’s nuclear power.

EDF is now scouring all its nuclear facilities for such problems. A dozen reactors will stay disconnected for corrosion inspections or repairs that could take months or years. Another 16 remain offline for reviews and upgrades.

Others are having to cut power production because of climate change concerns: Rivers in the south of France, including the Rhône and the Gironde, are warming earlier each year, often reaching temperatures in the spring and summer too warm to cool reactors.

Today, French nuclear production is at its lowest level since 1993, generating less than half the 61.4 gigawatts that the fleet is capable of producing. (EDF also generates electricity with renewable technologies, gas and coal.) Even if some reactors resume in the summer, French nuclear output will be 25 percent lower than usual this winter — with alarming consequences.

The Russia-Ukraine War and the Global Economy

A far reaching conflict. Russia’s invasion of Ukraine has had a ripple effect across the globe, adding to the stock market’s woes. The conflict has caused​​ dizzying spikes in gas prices and product shortages, and has pushed Europe to reconsider its reliance on Russian energy sources.

Russia’s economy faces slowdown. Though pro-Ukraine countries continue to adopt sanctions against the Kremlin in response to its aggression, the Russian economy has avoided a crippling collapse for now thanks to capital controls and interest rate increases. But Russia’s central bank chief warned that the country is likely to face a steep economic downturn as its inventory of imported goods and parts runs low.

Trade barriers go up. The invasion of Ukraine has also unleashed a wave of protectionism as governments, desperate to secure goods for their citizens amid shortages and rising prices, erect new barriers to stop exports. But the restrictions are making the products more expensive and even harder to come by.

Prices of essential metals soar. The price of palladium, used in automotive exhaust systems and mobile phones, has been soaring amid fears that Russia, the world’s largest exporter of the metal, could be cut off from global markets. The price of nickel, another key Russian export, has also been rising.

“If you have power plants that are operating well below capacity, we will either have to go to blackouts or revert to carbon-emitting energy, which is coal or natural gas,” said Thierry Bros, an energy expert and professor at the Paris Institute of Political Studies.

The government, which owns 84 percent of EDF, has added to the strife. As market electricity prices neared €500 per megawatt-hour last winter, Mr. Macron ordered EDF to increase the power it sells to third-party providers at a capped price of just €46 per megawatt-hour, making good on a political pledge to shield French households from inflation.

But to re-top its power supplies while dozens of nuclear plants are offline, EDF has been forced to buy electricity at the high prices of the open market, at a projected cost of over €10 billion this year. The move so infuriated EDF’s combative chief executive, Jean-Bernard Lévy, that he made a formal appeal to the government.

With turmoil mounting, the French government threw EDF a €2 billion lifeline in February. But that is hardly enough to resolve its woes.

The debt-laden company also faces risks with a government-backed deal linked to Rosatom, a longtime customer of EDF components and the biggest buyer of powerful French-made Arabelle steam turbines, which are found in both Rosatom and EDF nuclear plants.

Despite the war, France has done business as usual with Russia in nuclear power, which has remained exempt from European Union sanctions. Mr. Macron in February backed a deal for EDF to acquire the Arabelle turbine business, valued at €1.1 billion, from General Electric, restoring the manufacturing firm to French ownership after GE bought it from Alstom in 2015.

EDF is now seeking a lower valuation for the deal amid fears that Rosatom’s business may stumble, after Finland last month canceled Rosatom contracts for new nuclear plants. Should Rosatom face additional cancellations or building delays in other countries, EDF could face a slump in turbine orders and fresh losses.

For the French nuclear industry to recover, the country’s best bet is to stick with the plan to build a fleet of new nuclear plants, JPMorgan Chase said in a recent analysis.

“If anything, the current crisis makes this project, and the ambition to re-regulate EDF’s nuclear fleet or nationalize it, more legitimate than ever — for France and its European partners,” the bank said.

How do you ensure radiation safety? – Canadian Occupational Safety