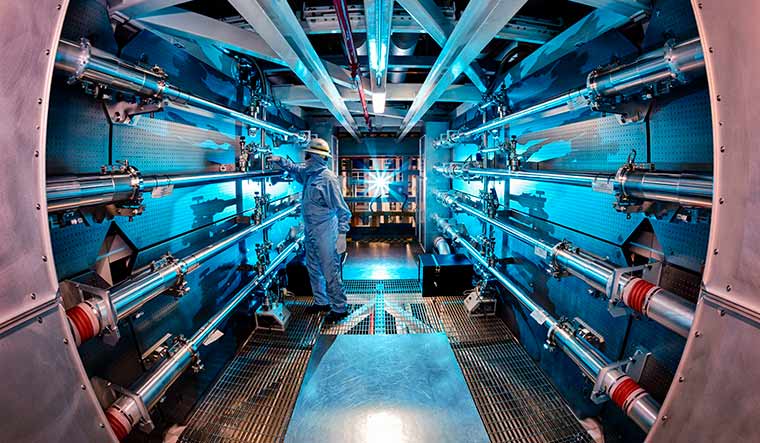 Fusion technology wants to be a game changer in nuclear energy

If nothing, 2022 will be remembered for the momentous breakthrough in the field of nuclear fusion energy coming 88 years after Italian scientist Enrico Fermi achieved nuclear fission.

In just eight years after Fermi’s discovery, the first nuclear reactor had been successfully tested at the University of Chicago in the US. One must wait and see how soon we can have a nuclear reactor running on fusion energy.

Fusion technology is slated to be a complete game changer in the field of nuclear energy―providing cheap, clean and limitless fuel for all our energy needs. Not only is the fuel abundant and inexpensive, but also there is very low-level radioactive waste.

Scientists have been working in different countries, including India, for several decades to make fusion successful. The problem was that they had to invest a huge amount of energy to get a little bit back.

Towards the end of 2022, it was reported that US scientists had made a historic breakthrough and got more energy than they used for initiating the fusion process, making nuclear fusion a viable energy source in the future.

The Lawrence Livermore National Laboratory’s fusion facility targeted 192 lasers on a miniature spherical capsule creating temperatures multiple times hotter than the center of the sun with high levels of energy to initiate a fusion reaction. It produced about 2.5 megajoules of energy using the 1.1 mJ of energy in the lasers to initiate the process, which is about 120 per cent net energy gain. Thus, making fusion energy commercially viable.

But what is fusion energy?

Understanding a few of the basic concepts may give us clarity regarding this technology.

The palpable solid material world is made up of extremely tiny particles of atoms, molecules and subatomic particles. Furthermore, what we consider mass of a particle is nothing more than concentrated energy. In both fission and fusion technology, we want to tap this source of energy.

Einstein’s theory of Special Relativity says there is equivalence of mass and energy in the famous formula E=MC2 which means that mass can be converted into energy and vice-versa. However, a little amount of mass converted into energy can release huge amounts of energy because the ‘C’ is equivalent to the speed of light―1.86 lakh miles per second, C2 is 34,59,60,00,000 miles per second.

Thus, the amount of energy in mass is huge―if we convert 20 gram mass into energy it may result in the energy released being equivalent to that in the explosion of a five lakh-tonne hydrogen bomb.

The problem is, we cannot easily convert mass into energy.

During experiments on subatomic particles, scientists have observed a particle completely annihilate into energy (electromagnetic waves) after colliding into its anti-particle. They have also noticed subatomic level collision of particles traveling at high speeds giving rise to the birth of a third particle which was not there earlier, demonstrating that energy also converts into mass.

In nuclear fission, the usual method in which we get nuclear energy, atoms are split to release energy, reactors consume radioactive material and eventually convert it into electrical energy.

Nuclear fusion is a type of nuclear reaction where two light nuclei collide together to form a single nucleus. Fusion results in a release of energy because the mass of the new nucleus is less than the sum of the original masses. The extra mass converts into energy.

Although the fusion of small atoms gives off a lot of energy, initiating this process requires a significant amount of energy to overcome the repulsion between protons.

There are different types of fusion reactions, but most involve two isotopes of hydrogen―deuterium and tritium.

This type of fusion reaction takes place in the sun. Two pairs of protons (two pairs of hydrogen atoms) collide and become two atoms of deuterium. Each deuterium then combines again with a proton (hydrogen) to form helium-3, which combine again and eventually form helium-4.

At each stage a neutron is also formed and most of the energy released is in the form of high energy neutron.

Therefore, the sun’s energy, comes out by hydrogen atoms (under the sun’s gravity with high pressure and temperature) fusing into helium, which is less in mass than hydrogen, and the extra mass being converted into energy, which is released at the rate equivalent to billions and billions of nuclear power stations. It is through fusion that nuclear energy is generated in every star.

With the fusion technology, fuel is not going to be a problem because deuterium can be extracted inexpensively from seawater. Tritium can be made from lithium, which is also abundant in nature. There is enough deuterium in the oceans to meet the human energy needs for millions of years, scientists claim.

For long researchers have been trying to harness fusion as a cleaner form of nuclear energy and reproduce it on earth in a controlled manner with a process where they generate more energy than they consume.

Nuclear energy through fission now provides about 10 per cent of the world’s electricity from about 440 power reactors. Nuclear is the world’s second largest source of low-carbon power (28 percent of the total in 2019). Nuclear power plants are operational in 32 countries. India has 22 operable nuclear reactors, with a combined net capacity of nearly 7,000 MW electrical energy.

Building a fusion power plant is a challenge because deuterium and tritium must be heated to about 100 million degrees centigrade. At that temperature a fully ionized gas-plasma is formed. The plasma is then ignited to create fusion.

Currently, scientists are pursuing two methods for achieving nuclear fusion: inertial and magnetic confinement. In inertial confinement systems, laser beams are used to compress deuterium-tritium fuel pellets to extremely high densities. When a critical point is reached, the pellet is ignited through heating. The resulting heat is then used to generate steam that powers electricity-generating turbines.

In magnetic confinement systems, electromagnets are used to contain the plasma fuel. The tokamak device (a toroidal apparatus for producing controlled fusion reactions in hot plasma) contains the plasma in a donut-shaped chamber. A powerful electric current, microwave, radio wave or accelerated particles are sent into the plasma to achieve high temperatures of several hundred million degrees centigrade.

The world’s largest nuclear fusion reactor, ITER, costing $18.2 billion, has begun development in southern France and it is slated to be running by the year 2025 at a commercial scale. ITER (the Latin word for ‘The Way’) is a large-scale scientific experiment intended to prove the viability of fusion as an energy source. It is an international effort with seven partners―China, the European Union, India, Japan, Korea, Russia and the US―having pooled their financial and scientific resources to build the biggest fusion reactor in history. It intends to produce 500 MW of fusion power from 50 MW of power invested to heat plasma and generate fusion.

There are government-funded fusion research centers in 26 countries, including India, the US, the UK, Germany, China, Korea, and Japan.

WHAT IS NUCLEAR FUSION?

Nuclear fusion is a type of nuclear reaction where two light nuclei collide together to form a single nucleus. Fusion results in a release of energy because the mass of the new nucleus is less than the sum of the original masses. The extra mass converts into energy.

WHY IS IT IMPORTANT?

* Fusion is mostly done using hydrogen, which is abundant and can be extracted cheaply from seawater or lithium

WHEN CAN IT BE SCALED UP?

Not any time soon will fusion power our homes and factories. Some experts say in about 20 years, it would start giving meaningful yields.