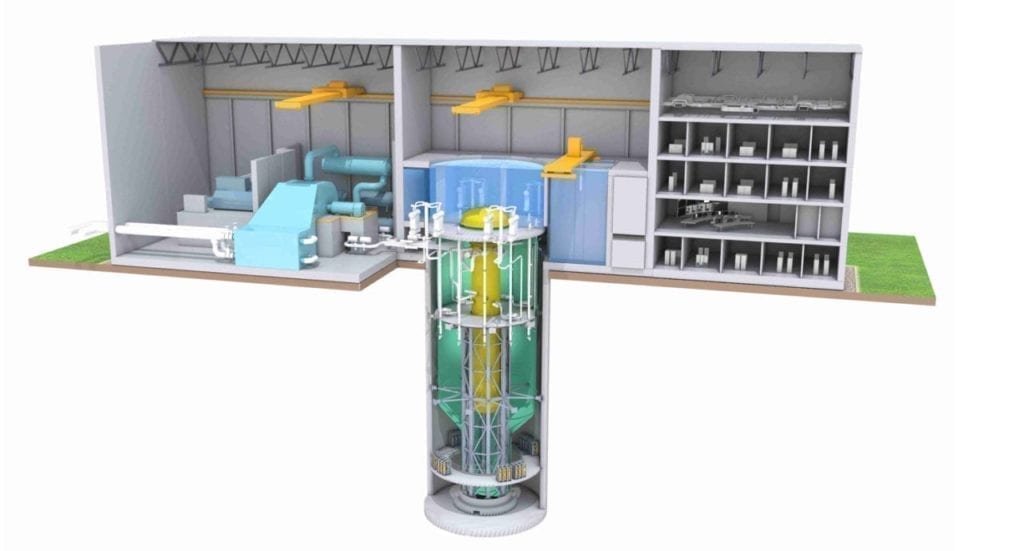 GE Hitachi Nuclear Energy (GEH) and the Estonian company Fermi Energia OÜ have entered into a team agreement to support the possible deployment of a small modular reactor BWRX-300 (SMR) in the Baltic country.

The agreement between the technology company and the company, which was established in 2019 by nuclear industry professionals, comes two years after the companies signed a Memorandum of Understanding (MOU) to highlight the economic feasibility of deploying a 300 MWe BWRX-300 SMR in Estonia to consider.

“Through the team agreement, GEH expects to support Fermi Energia in key areas such as licensing, human resource and supply chain development and further development of the information and analysis required for the possible deployment of the BWRX-300 in Estonia,” said GEH on March 8th.

The development is another notable step for Fermi Energia, which has worked with the BWRX-300 to conduct feasibility studies for several SMR technologies. These include the 300 MWe Stable Salt Reactor (SSR) from Moltex Energy, the small light water reactor modules from NuScale; Terrestrials IMSR-400, a 195 MWe Generation IV core technology that uses a molten fluoride salt; and the 5 MWe (15 MWth) Micro Modular Reactor (MMR) design from Ultra Safe Nuclear Corp.

Kalev Kallemets, CEO of Fermi Energia, told POWER on March 8th that, for reasons of “conservatism and competitiveness,” the company’s strategy is to make a final selection after completion of the initial (FOAK) completion and prior to submission of construction submit application for approval to the Estonian regulatory authority. “We hope by 2028,” he said. “We would probably vote down from the current four to six drafts to two to three by 2026 if we submitted an application for the fundamental decision.”

Estonia is reaching for solid energy

The BWRX-300 is GE’s 10th advancement in Boiling Water Reactor (BWR) technology. According to GEH, this is the “simplest and most innovative BWR design since GEH started developing nuclear reactors in 1955”. GEH also notes on its website that the design is based on the Gen III + 1,520 MW ESBWR, which the US Nuclear Regulatory Commission certified in 2014.

The BWRX-300 is a water-cooled Small Modular Reactor (SMR) with natural circulation (~ 300 MWe) and passive safety systems. “As the tenth development of the boiling water reactor (BWR), the BWRX-300 represents the simplest and most innovative BWR design since GE began developing nuclear reactors in 1955,” says GEH. With the kind permission of GEH

According to Fermi Energia, an SMR is well suited for Estonia, a small member of the European Union (EU), as it is a cost-effective alternative to building large nuclear power plants while strengthening Estonia’s national safety and decarbonization initiatives.

Estonia has been looking for ways to decarbonise its energy supply since 2017 when it set a long-term goal of reducing greenhouse gas emissions by almost 80% by 2050 compared to 1990 levels. So far, the country’s government has pledged to end oil shale power generation by 2035. It is trying to replace some of this energy with the formation of a national working group on nuclear energy. Part of the nation’s urgency to build a domestic nuclear segment is fueled by its ambitions to seek energy independence from Russia. For example, it is working with Latvia and Lithuania to end synchronization with the Russian grid system and effectively end electricity imports from Russia by December 2025.

At the beginning of this year, Fermi Energia completed a capital increase of EUR 2.5 million – mainly from Estonian investors – in order to submit an application to the government for “National Designated Spatial Planning”. According to Kallemets, the company continues to “develop more detailed decision-making material for a credible national spatial plan, helping Estonia meet climate goals while maintaining energy security for Estonians and the region.” At the same time, Fermi Energia has made advances in developing key partnerships for the construction of SMR. She recently signed letters of intent with European nuclear companies, Tractebel Engineering SA, Vattenfall and Fortum to “work together on several technical, regulatory, human and economic studies in the coming years to prepare a suitable location and to seek a fundamental decision from the Estonian government. ”In particular, the Belgian engineering firm Tractebel is reportedly considering becoming a shareholder in Fermi.

On March 2nd, the company also signed a letter of intent with Rolls-Royce, UK, to investigate all aspects of SMR deployment, including network suitability, cooling, contingency planning, human resources, license feasibility, economics and supply chain. “Fermi Energia is considering SMR designs with credible technical, financial and political commitment a unique insert in this decade. The Rolls-Royce SMR undoubtedly fits in with a strong UK government commitment to carbon neutrality and nuclear energy with adequate national funding for the development of the Rolls-Royce SMR, ”said Kallemets. “Fermi Energia will consider Rolls-Royce SMR to be one of the most credible SMR designs in its nationally determined spatial planning process.”

Meanwhile, in February, Fermi Energia held a one-day conference to discuss its options on licensing models, disposal of nuclear fuel and waste, industrial use of nuclear energy, site testing for SMRs and the speed at which an SMR could be built in Estonia , to investigate .

During that conference, Claes Andersson, Senior Specialist at Swedish energy company Vattenfall, suggested that the BWRX-300 “offers a way to quickly build SMRs in Estonia” due to GEH’s earlier reactor development and its simple processes and systems. The BWRX-300, which has licensing activities in the US, Canada, UK and Poland, will be operational by 2028. The pre-construction for the first unit could take 48 months, while the construction for the first unit could take 36 months and the following units could take 24 months, he suggested.

At the conference, Chris Parker, executive director of nuclear waste company Deep Isolation, presented a preliminary study indicating that a deep-borehole nuclear waste disposal facility in Estonia would be both a “safe and affordable” option.