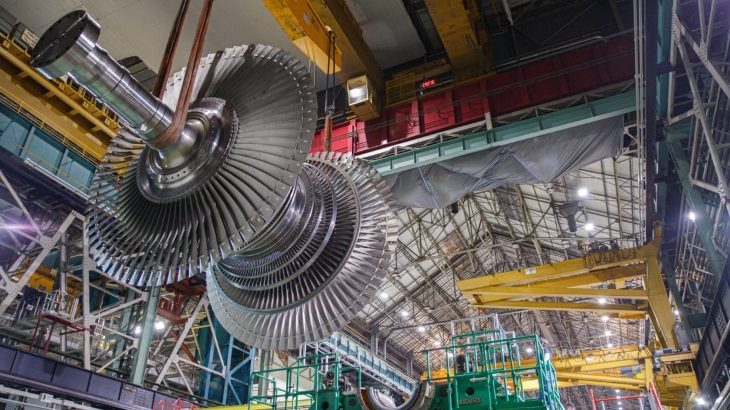 GE Steam Power announced today that it has designed and manufactured the largest (75 inch) last stage blade ever for its Arabelle low pressure rotor. The shovel will allow the Hinkley Point C nuclear power plant under construction in Somerset, England, to produce 3.2 GWe of carbon-free electricity, GE said. When completed, this Arabelle steam turbine will be the most powerful nuclear steam turbine in operation. It was tested at GE’s facility in Belfort, France.

The 8 meter wide blade module was inserted into a compensation pit specially developed for large turbines and rotated at a speed of 1500 revolutions per minute, similar to the future site conditions.

“This important turbine part is a milestone for Hinkley Point C in the first quarter of 2021, which was reached on time despite the pandemic,” said Guillaume Callewaert, EDF’s HPC program director. “This large component will be delivered on site and will support the mechanical and electrical ramp-up phase of our project in the coming months.”

The last stage blades are part of the low pressure module of a steam turbine generator that converts steam into electricity in a nuclear power plant. Longer blades increase the efficiency of a steam turbine and allow further optimization of the back pressure, which contributes to a higher output of the nuclear power plant, according to GE Steam Power.

“Hinkley Point C is key to the UK’s energy strategy to reduce emissions in the energy industry,” said Frédéric Wiscart, senior executive on projects at GE Steam Power. “Once completed, it will feed 3.2 GWe of reliable, CO2-free electricity into the grid over the next 60 years.”

As part of its contract to engineer, source and commission the two conventional islands for Hinkley Point C, GE Steam Power will manufacture and supply critical equipment, including the Arabelle steam turbine and generators.

In January, GE Steam Power delivered the first Arabelle steam turbine module for the Akkuyu nuclear power plant in Turkey. This was the first equipment GE supplied for the project, and it was delivered four months ahead of schedule.

GE’s entire scope of application for Akkuyu includes all major equipment items for the four turbine islands of the nuclear power plant, including the Arabelle steam turbines, the Gigatop 4-pole generators and the vacuum pumps in the turbine hall. Akkuyu is the first nuclear power plant in Turkey and will have a capacity of 4.8 GWe when completed.

GE Steam Power said that after delivering its equipment to Akkuyu in the coming years, the company will help install more than 20 GWe of CO2-free energy globally thanks to its Arabelle steam turbine technology, which “consolidates” the fleet to 53 GWe.

5 Reasons Your Teeth Are So Agonizingly Sensitive